It's been 3 months now since I've come home to Mizoram permanently. I'm still getting used to living back here now, which is quite in contrast to living in the metros (especially when you've left Mizoram at the tender age of 10), and I have a lot of funny experiences to share with you all, but for now, I'll just mention this one incident.

Earlier this week, we received a letter from the "Millennium Centre Shop Owner's Association" inviting us to take part in their General Body Meeting. We own one tiny shop at Millennium Centre, better known as "MC" here, and it is one of the grander and more upscale shopping center in Aizawl.

Now, as I have mentioned, I've been away from Mizoram since I was small, and I don't really know anybody back here. But being the youngest and only son, it was time for me to take up various family businesses. Even though I knew we owned a shop at MC, I had no idea who the tenants were!

And so my mom told me to go for the meeting!

I was hesitant as hell, because apart from not knowing anyone, I am an introvert as well. I called up my friend and classmate from Montfort Hminga who owns a restaurant there, hoping I could go with him, but he was in Bangalore. I really didn't want to go right then. But then mom gave me this long lecture on how it was high time I started acting mature and suck it up blah blah blah, and so… I went to the meeting alone.

I reached the venue: Dawrpui Multipurpose Committee Hall, 15 minutes early because I really didn't want to be late. All the current office bearers were already there.

They gave me a very warm welcome and since they had never seen me before, I had to introduce myself. They asked me the name of the Shop Owner, and I told them my late father's name. They searched the entire list and dad's name wasn't in it! I started to panic. Then they asked me the name of the tenants, and I had no idea who they were! Sweat was breaking profusely from my forehead and my knees were starting to feel weak. I could feel their glaring gazes and imagined what they were thinking, who the hell is this imposter and what is he doing here!?

Finally they asked me the Shop's number and I had written that down in a piece of paper. They looked up the number in their list and it was there! And guess what, the name of the Shop Owner was in my name, that's why they couldn't find my dad's name in it! Mannnn, that was SUCH a relief for me.

And so, I went and sat down. I felt light-headed indeed right then, lolz.

Like I said, I went early, so I was the only member who reached before 11 AM. 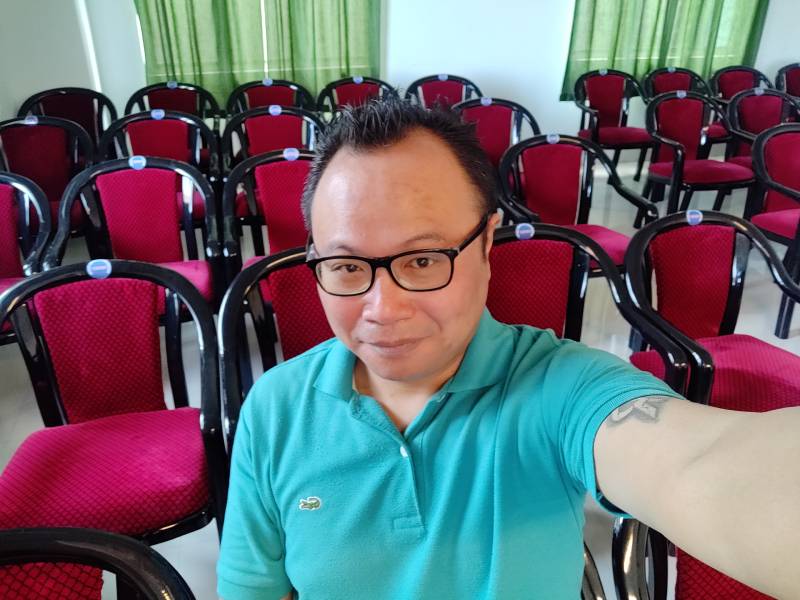 Soon, members of the Shop Owner's Association started arriving one by one. I just sat there alone in my little corner. Everybody seemed to know each other, they hugged, they shook hands, they laughed, they high-fived etc., while I just sat there alone like a spider on the side of a wall. In fact, everybody sat with each other while I was the only person sitting alone in my entire row :(

Finally, this gentleman arrived and saw me sitting alone so he came and sat next to me :) We didn't speak much, but I learnt later that his name is Pu John Chhangte. Thank you for that, Pu John.

The meeting started at 11:30 AM and a lot of agendas were mentioned. I just sat and listened to everything. Soon, the meeting was over and it was time for the General Body election. The current office bearers left the stage and sat with us, while members of the MIMA (Mizoram Merchant Association) entered the hall to conduct the election.

They came and distributed the ballot papers and we voted for the new office bearers one by one. I just voted whoever Pu John was voting for since I didn't know anybody. He caught me peeping into his ballot paper and just laughed :D

We had snacks served during the election, and it was this delicious egg roll and gulab jamun. 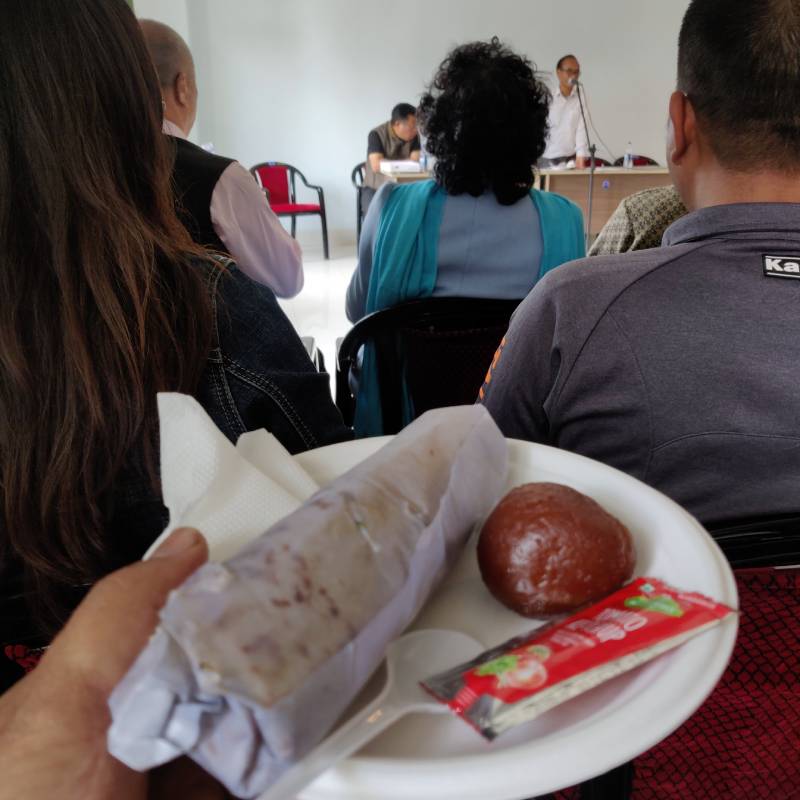 Finally, the election was over. I had to mark the names of all those who were earlier voted because they couldn't be voted again. 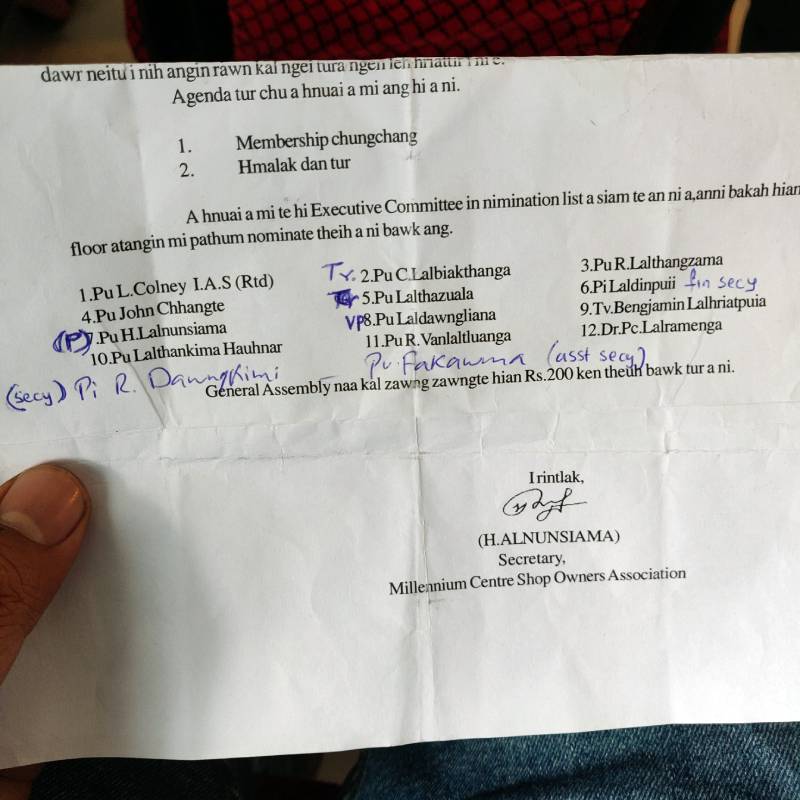 So here is the new office bearer list of the Millennium Centre Shop Owner's Association 2020-21: 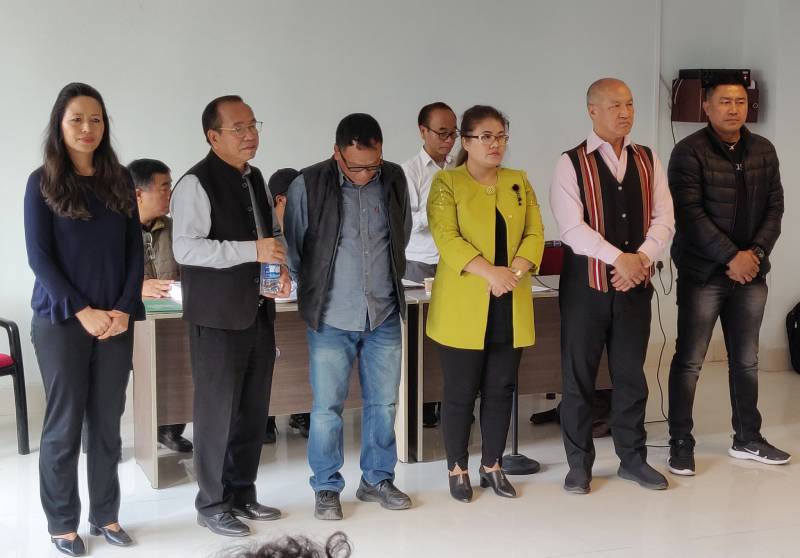 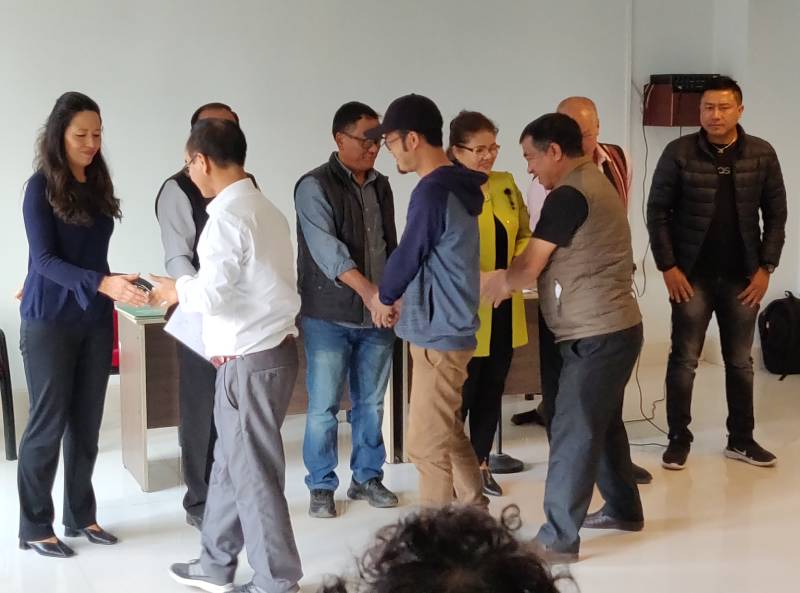 And soon we ended the meeting by saying the Lord's Prayer.

I must say, I'm glad I went and participated. Though I don't know anybody yet, I'm sure in good time I will get to know others soon, it's just a matter of time. A lot of important topics were discussed during the meeting but I don't think I'm allowed to reveal them here, so I'll leave it at that.

So that was it, a brand new experience for me and here's to many more such experiences on the way. Cheers for now everyone. Stay safe.