Today, exactly a year ago, I thought it was the end of me when doctors suspected I had the dreaded H1N1 swine flu virus.

20th February 2015 was a Friday. Back then, I hadn't moved to Pune yet, so we would travel from Mumbai to Pune on a Monday morning, spend the entire week in Pune, and then head back to Mumbai on a Friday evening. We were accommodated at our company's guesthouse during our stay in Pune.

That Friday morning, I started feeling unwell. In case some of you might forget, January - February - March 2015 was the peak of the unfortunate H1N1 outbreak in India, with the worst affected states being Gujarat, Rajasthan and Maharashtra. The swine flu outbreak claimed more than 2000 lives in India, so yeah, it was scary to live in regions where contamination was high. It was even more scary to fall sick at such places.

My friends and I were supposed to head back to Mumbai that Friday evening. But when I started getting the chills and running a temperature, I told them I wasn't in a condition to go back to Mumbai, so Dev, Tanmay and Hemant went back to Mumbai without me. Three other friends - Sumeet, Abhilash and Pratik, were staying back in Pune for the weekend so I wasn't alone at the guesthouse.

But in the evening, I got worse. Apart from fever and chills, I started becoming delirious. Sumeet rushed me to the nearest hospital, where I was immediately suspected of being infected with H1N1. I was admitted in one of the wards, hooked up on various IVs.

I'll forever be indebted to Sumeet, Abhilash and Pratik, because after they admitted me in one of the wards and I had passed out from all the medications, they were about to go back to the guesthouse. But as they were leaving, they overheard one of the doctors talking to one of the nurses, who described the ward I was in as an H1N1 isolation room! It was then that they found out the other patients in my ward were all H1N1 positive! They were pissed as hell, because I wasn't a confirmed case yet, it was just merely a suspicion. They stormed me out of the hospital that same night and took me to a much better private hospital. You can read the rest of my hospital ordeal in my blog post link above.

Had they not taken me out from that isolation ward that night, even though I was cleared of H1N1 later, I think I could have been infected with it. Much thanks to my friends indeed!

While I was recovering in the guesthouse, I had unexpected visitors. First, it was my flatmate from Mumbai who drove all the way to Pune to see how I was doing. And then there were these two Mizo guys, Lalrinpuia and Remruatkima, who's the secretary of PMCF (Pune Mizo Christian Fellowship).

And that is what I really love about our Mizo community. As mentioned earlier, I hadn't moved to Pune yet as I was still living in Mumbai, and so I didn't know any Mizos in Pune. And none of the Mizos in Pune knew about me. However, these two office-bearers of the PMCF heard from people in Mizoram that there was a Mizo dude currently being treated on suspicion of H1N1 in Pune, and so they searched high and low to find out who I was. Finally, from one Facebook mutual friend to the other, they managed to trace me and paid me a visit!

Gotta love our Mizo society for that :)

Today, a year later, I am now a proud resident of Pune. Though I still haven't interacted much with our Mizo community, I now have my fair share of Mizo friends here in Pune. It's really hard for me to meet new people because of my hectic work. I spend most of the weekends in office as well, especially since we're almost about to launch our next big game.

Our next game is going to be huge and awesome, I promise you that, because it revolves around Salman Khan. That's an open secret so I don't have to be discreet about it. However, there's another celebrity we've just tied up with, and I don't think I can talk about that yet. But the other day, I along with the top management of our company went to meet him. And dear Lord, my knees fell weak when he shook my hand!

I mean, it's one thing to meet a celebrity. I've lived in Mumbai for 8 years before moving to Pune, so I have seen my fair share of celebrities, especially since my apartment was at Carter Road, Bandra. It's just another day if you bump into Aamir Khan or sit in a restaurant a few tables away from Amitabh Bachchan. Feels awesome to ask them for an autograph or a selfie together. But to be actually invited by a celebrity into his own house, is a completely different feeling!

And so we woke up at 5AM, left Pune by 6, reached Mumbai by 9:30 and waited in front of this celeb's house, whose gate was guarded by 5-6 cops inside. There were surveillance cameras everywhere. Most visitors (I mean the few who had an appointment) were frisked and x-rayed, but they didn't frisk us because we were vetted by a very high authority. There was a police van stationed right outside his apartment too. Inside his house, along with the cops, there were many private security personnel as well. He had his own private receptionist and secretary, along with an entourage of other household staff.

We walked into his private office which was in the basement, where he greeted all of us warmly. He offered us tea and coffee. And then we talked about our game concept and proposal. Even though the meeting was just for 15 minutes, he was so into our concept that he ended up interacting with us for 2 hours! Finally, another secretary had to come in and remind him that he had some other agenda. Overall, he really liked our game proposal (not to brag, but it was my concept :D ) . He shook our hands one more time and left. I never expected a person of his stature to be so down-to-earth and humble. What an incredible man indeed.

Once our Salman Khan game is released next month, that's the next project I'll be working on. I feel blessed to have such an interesting and exciting future ahead. But alas, that comes at the cost of my social life. It means there's no time to hang out with friends or meet new people.

At least I'm glad I'm not lying in bed drowning in antibiotics and other medications like last year :)

So cheers, and keep watching this space for more news on our upcoming game. 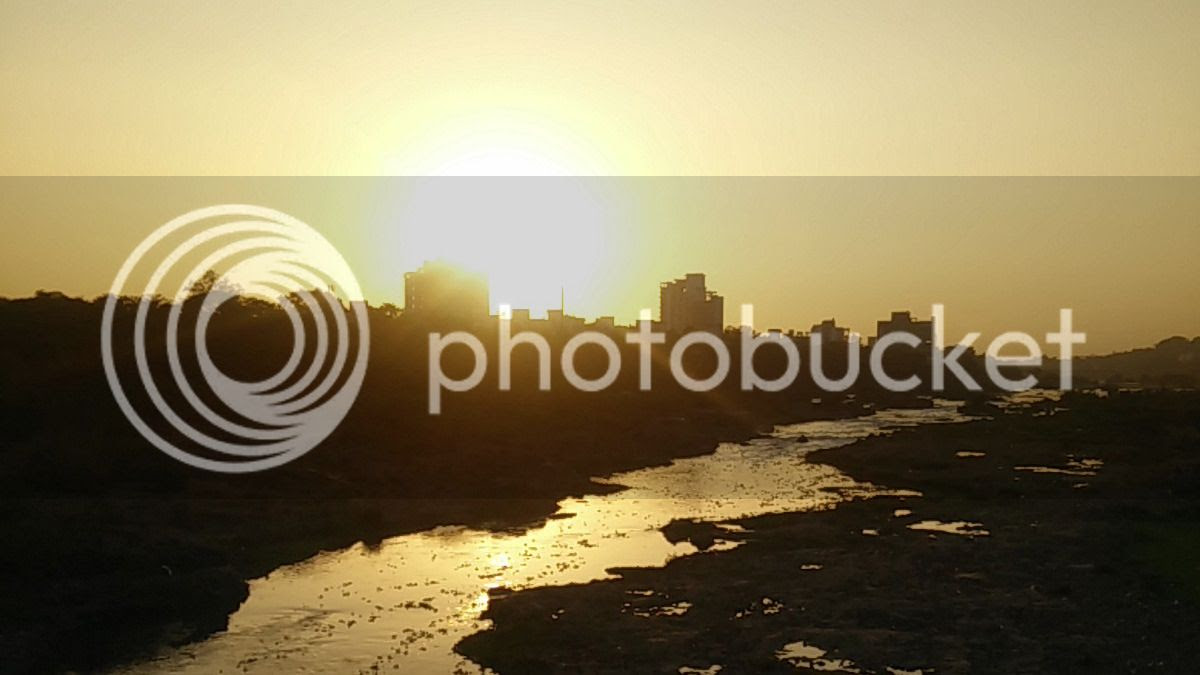 [Pic - A photo of the sunset as I walk across a bridge over the Mula Mutha river. The bridge connects my office in Kalyani Nagar to my apartment in Koregaon Park.]

Posted by Mizohican at Saturday, February 20, 2016 No comments: