Now that the Steam Summer Sale 2020 is finally over, I see a lot of my gamer friends on Steam contented with the games they have purchased. Some bought the dream games they had kept in their wishlist for almost a year, while others donated their kidneys so they could afford the next big AAA title. 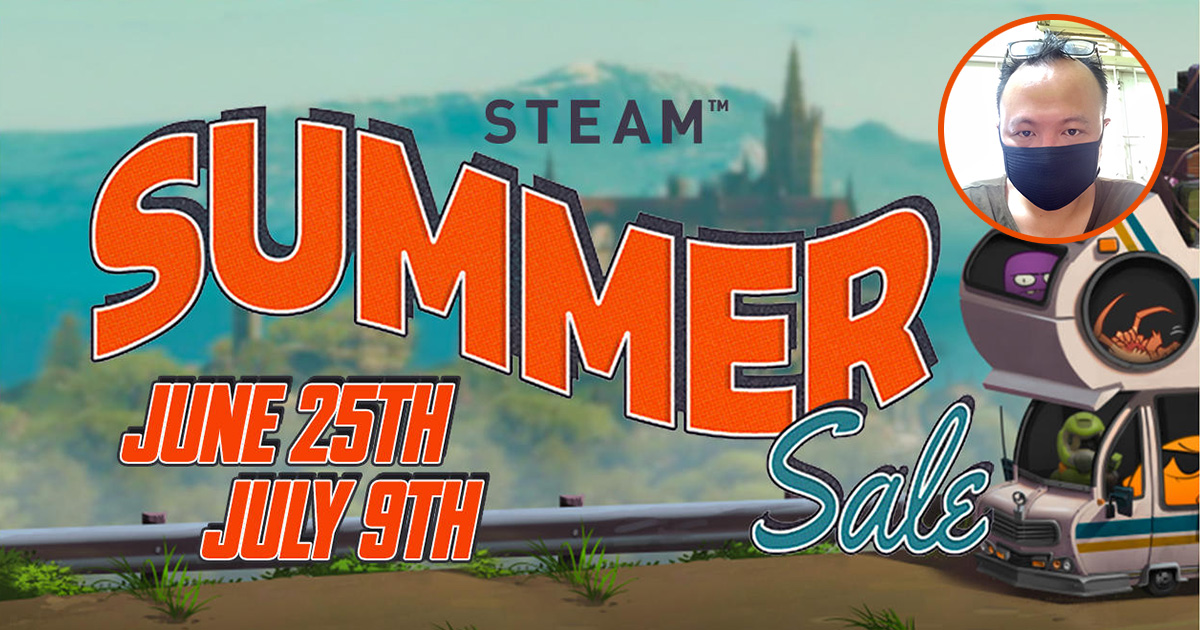 As for me, yeah, I'm utterly butterly shutterly satisfied with my purchases. :)

Steam Sales have always been the best part of a year for me. I'm like that kid stuck in a candy factory whenever a Steam sale is going on, I just go completely crazy with all the game discounts surrounding me! Steam is the largest gaming platform in the world, with over 75% of PC gamers on it, so you can imagine the magnitude of this sale.

For my visitors who aren't into gaming, the best way I can describe this feeling for you is, imagine your excitement when ZARA or Forever 21 or Sephora has a sale. Awesome, right? Now multiply that excitement level by like a gadzillion times, that's the excitement I feel during Steam sales :D :P

Here's a quick glance of my game purchases during these 14 days of sale. 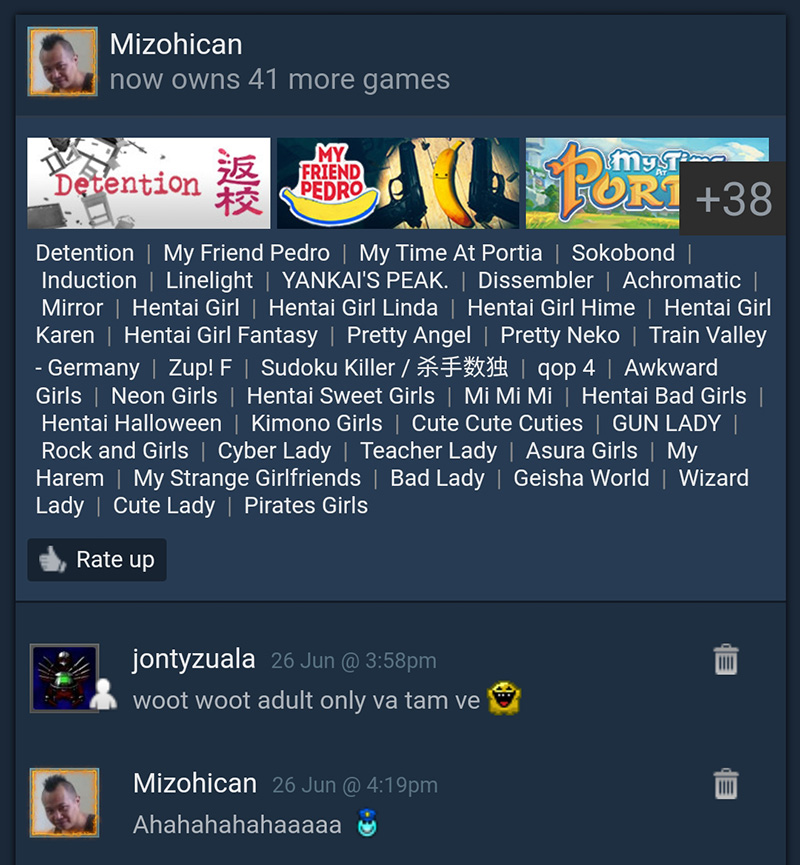 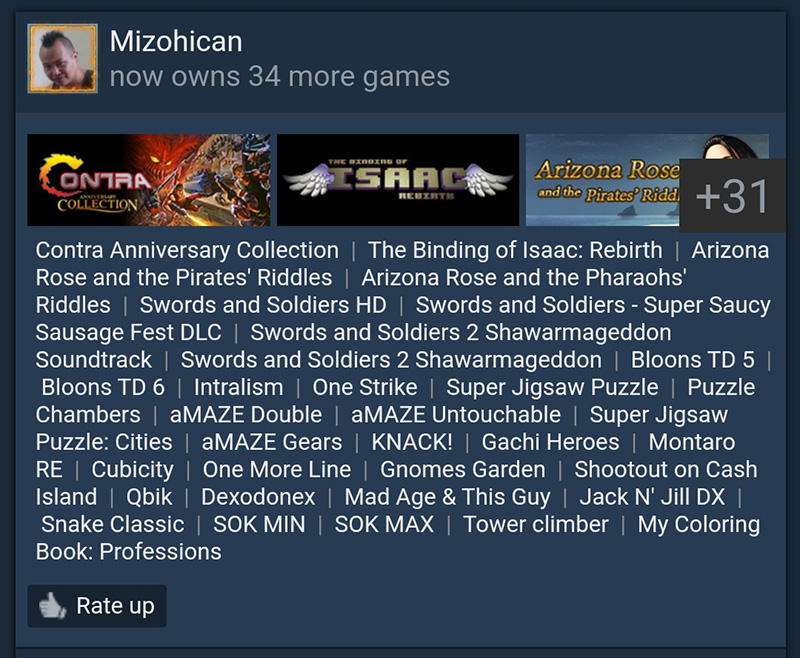 "Contra Anniversary Collection" is definitely the highlight of this purchase, which includes all Contra games ever published. I'm definitely going to relive those 90's Nintendo console days! I also bought a couple of nonogram puzzle games like the Arizona Rose series, along with platformer games like S&S series and Tower Defense games like Bloons TD series. 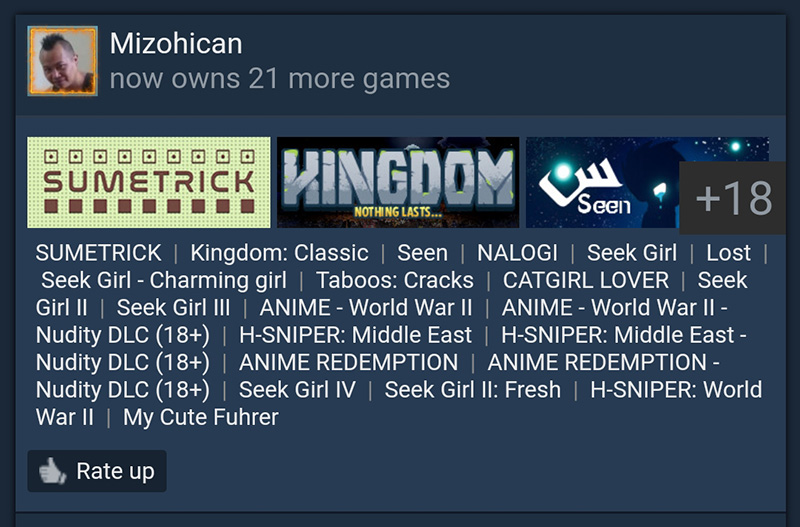 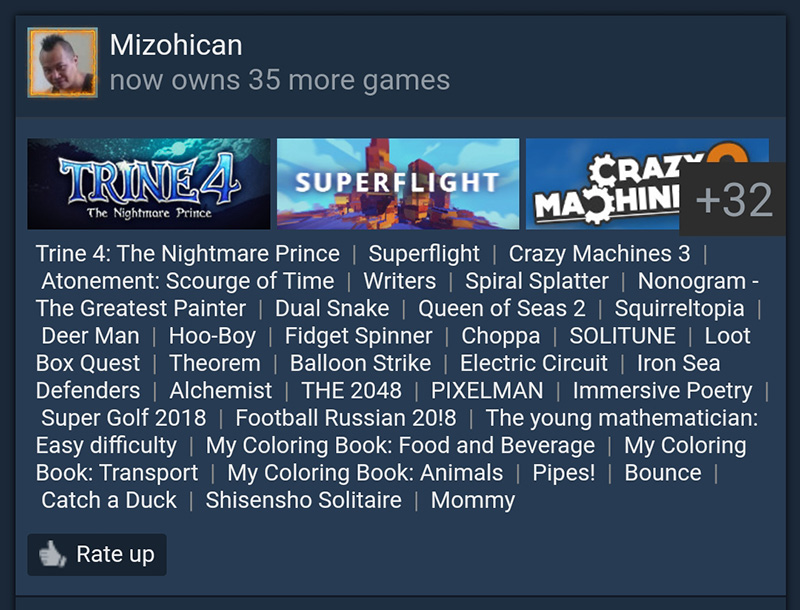 With Trine 1, 2 and 3 already in my collection, I had to buy part 4 to complete my collection. I love the Trine series because it's not just a platformer that requires skill and reflex, there are a lot of puzzles within the game as well. Other games I bought like "Superflight" and "Crazy Machines 3" have an overwhelmingly positive reviews on Steam, so those are two other games I'm really looking forward to playing. 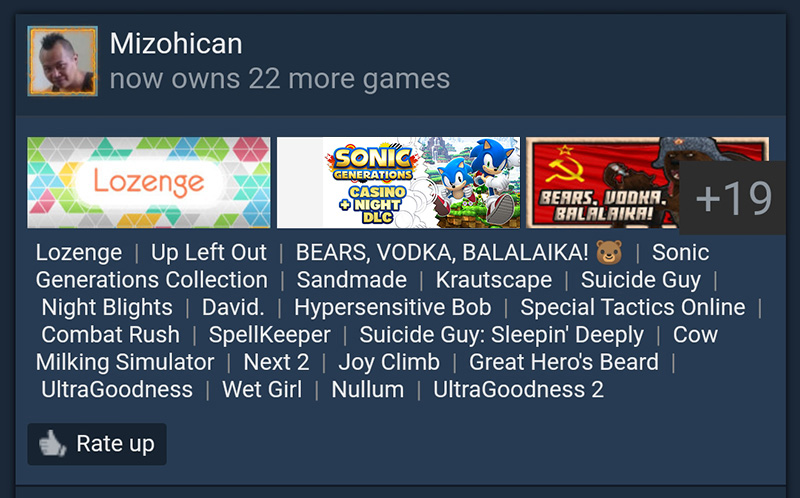 "Sonic" was the first game I played on a SEGA console back during the Nintendo Samurai craze, so yeah, this is another game guaranteed to take me down memory lane. Got a couple of minimalistic puzzle games as well, including a game called "Bears, Vodka, Balalaika" where you  play as a bear in FPS mode and kill German soldiers during WW2 while drinking vodka to recharge, lolz. 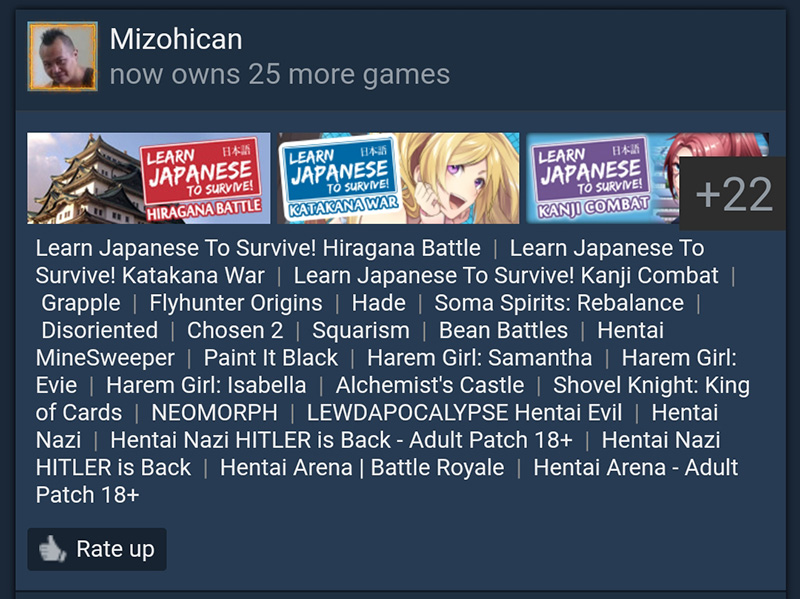 All the "Learn Japanese to Survive" series (Hiragana Battle, Katakana War and Kanji Combat) have an overwhelmingly positive reviews on Steam and people praise the games for their gameplay, storyline and ability to teach non-Japanese speaking players Japanese in very simple steps. So yeah, once I start playing this series, my vocabulary is bound to extend beyond just Arigatō, Gomennasai and Konnichiwa. :D 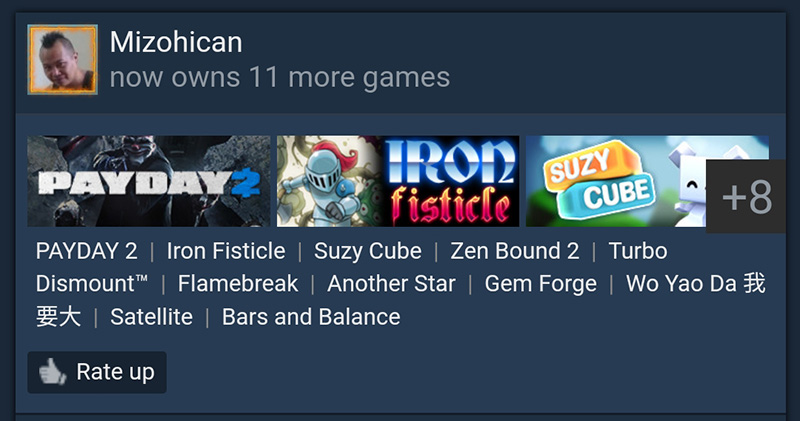 I have "Payday 1" in my library, so yeah, I bought "Payday 2", though I haven't played part 1 even once before. But people talked a lot about this game so maybe one day, I too will give it a shot. :) 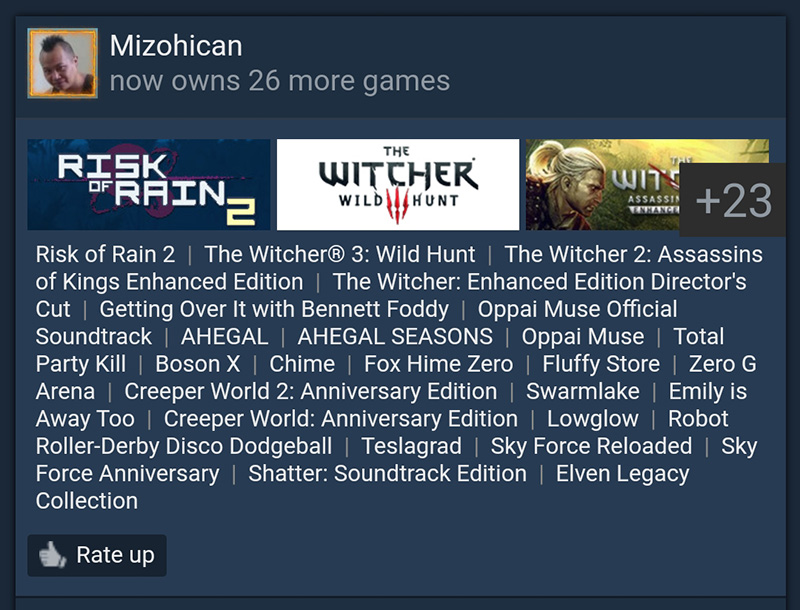 The Witcher series (1, 2, and 3) were available on a great discount so I bought the bundle. "Risk of Rain 2" is another game I'm really looking forward to playing because even though it is still at an Early Access stage as of now (meaning it is not the final, finished product yet), it is currently one of the highest rated games on Steam as of today! You don't see an Early Access game with these many positive reviews so it is definitely a "must buy" game. 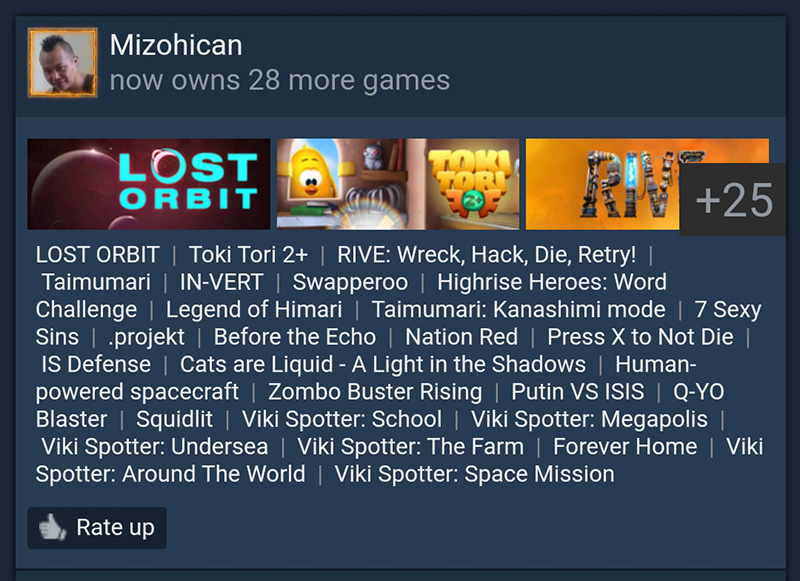 "Lost Orbit" is an intensive space exploration game, and I bought the Deluxe Edition which included the soundtrack. Funnily though, I also got their next game "Terminal Velocity" after buying this bundle, even though it was not included in the bundle description, lolz. I'm not complaining. :D 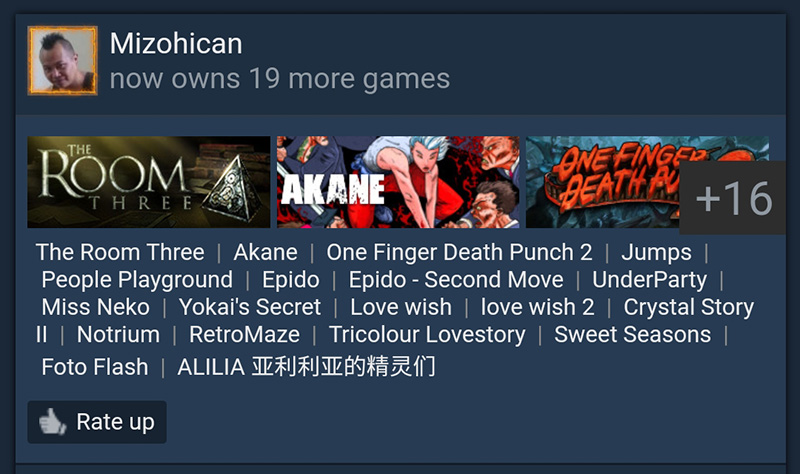 I already have "The Room" 1 and 2, so naturally I bought the third part. It is one of the most intense puzzle games I have ever played, and till today, I marvel at the awesome level designing behind the game. I'm looking forward to playing "Akane" too, which is an arena arcade slasher game, as well as the sequel to the highly successful "One Finger Death Punch" game. 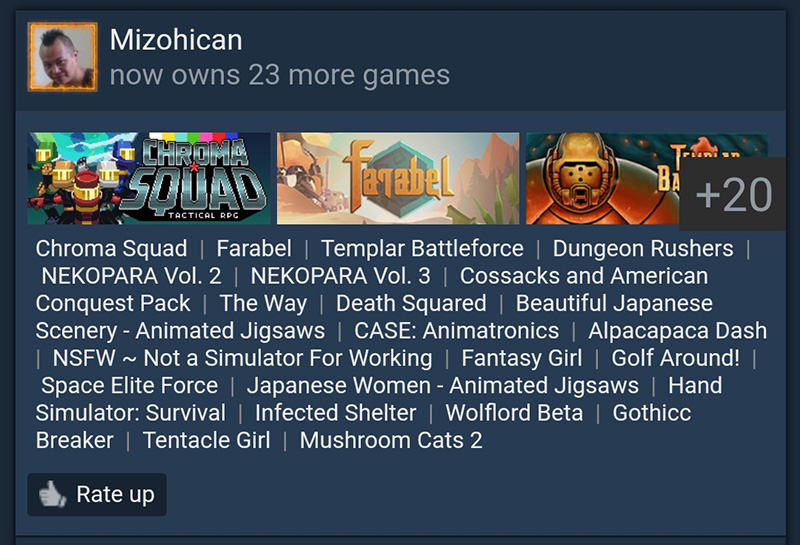 I bought a bundle called the "Tactical RPG Bundle" which included the following games - "Chroma Squad", "Farabel", "Templar Battleforce" and "Dungeon Rushers", all very highly rated strategy RPGs. It's good to keep a lookout for such bundles that are collection of great (but not very popular) games from different Indie developers. 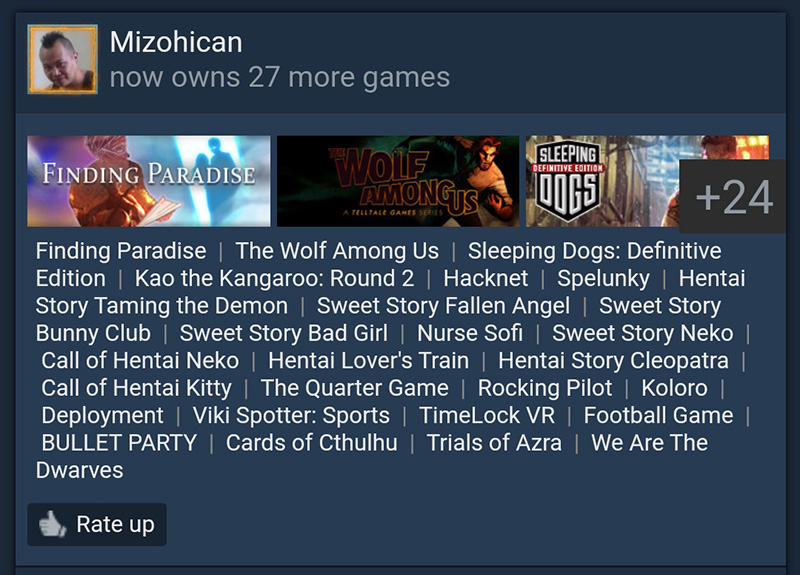 "To The Moon" is one of my all-time favourite games, I even blogged about it 4 years ago. I cried like a baby while playing that game. And that is why I am so looking forward to playing "Finding Paradise" because it is the sequel to the game and according to reviewers, it is even better than "To The Moon". Let the ninjas chopping onions enter. 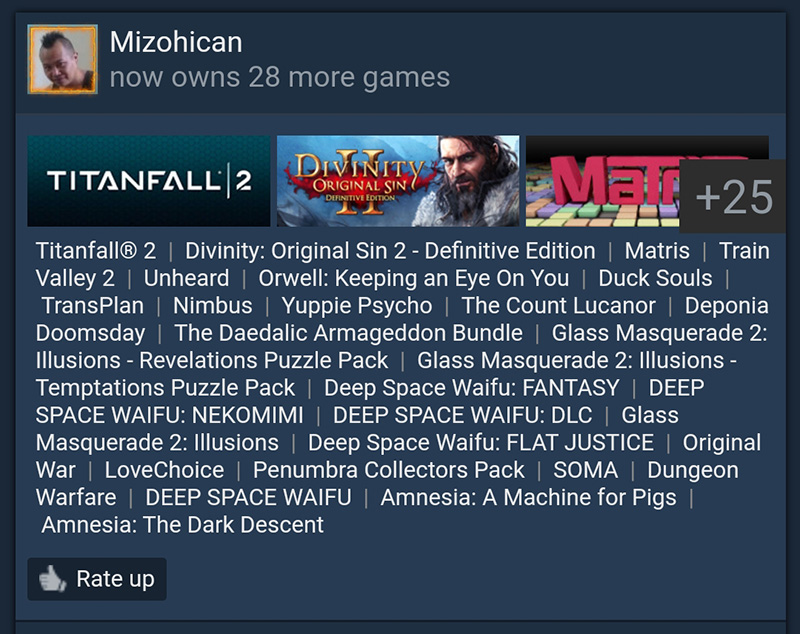 I bought two more expensive games from my wishlist - "Titanfall 2" and "Divinity Original Sin 2" which both require over 60 GB of installation space, lolz, along with many other smaller puzzle games like "Orwell", "Transplan", "Train Valley 2" (which is apparently very different from Train Valley 1), "Unheard", "Nimbus", "Matris" etc. 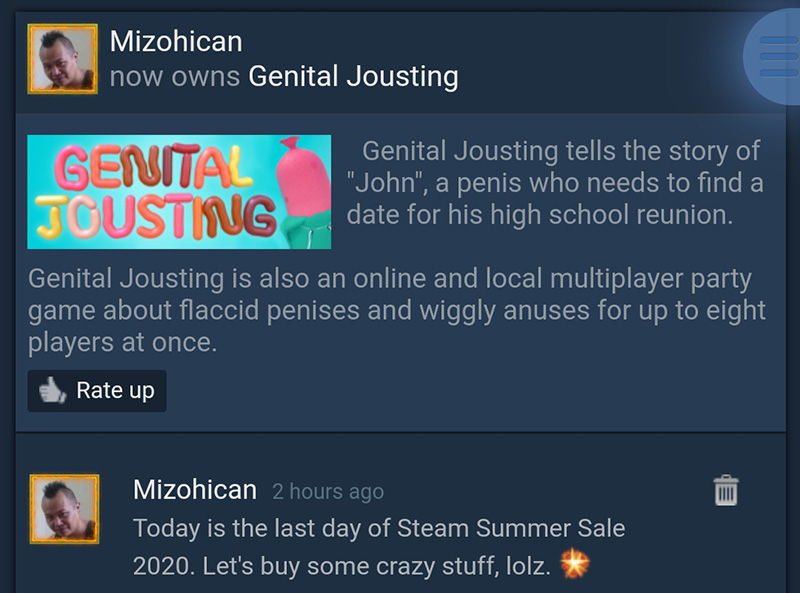 I started the last day of Sale by purchasing "Genital Jousting", lolz. Apparently, in the game, you are a penis, and you fight with other online players who are also all penises, race against them, wrestle them, dine with them, kill them, add them as friends etc. It's going to be such a wacky game!

I spent the last day carefully planning my purchase. People tend to over-buy a lot, since it is the last day of sale, and so I wrote down all the games I wanted to buy on an excel sheet, along with their price. For those of you unaware about Steam, you first need to put money into your Steam wallet, kinda like a pre-paid card, and then make your purchases.

I fixed myself a budget, and after a lot of deleting and reshuffling my list, I was finally able to fit the following games within my allocated budget and purchased them all immediately. 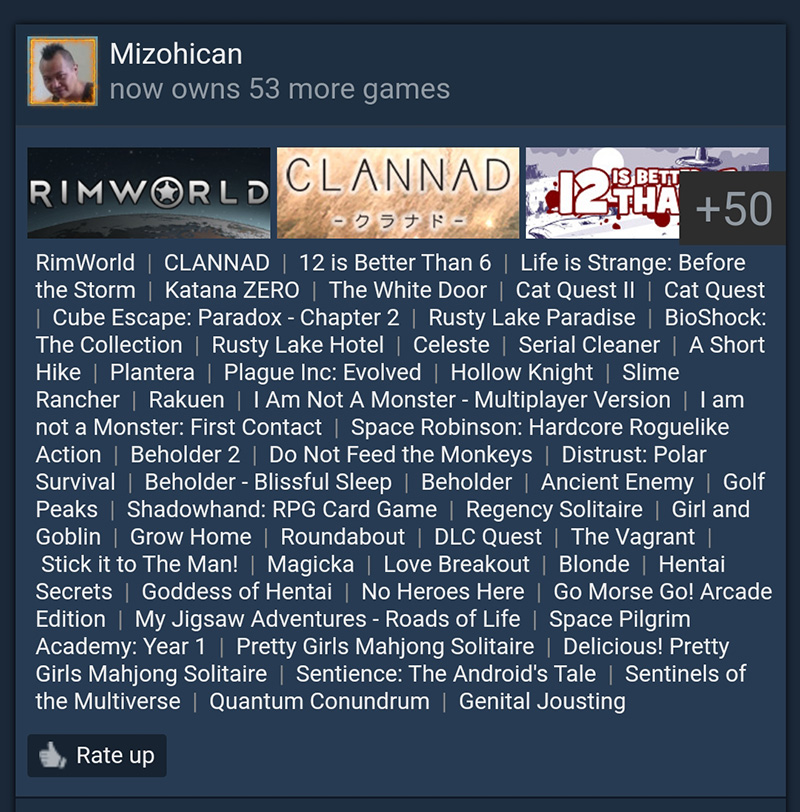 After that, I stayed away from Steam. I completely refused to even play any of my games, in case I wandered off into the store section again. I only switched on my Steam application again at 11 PM once the Sale deadline was over. And I believe that is a really wise decision for a compulsive buyer like me.

So my last day purchase was HUGE. In fact, I think it is bigger than all the purchases before that put together. There are so many prominent games in the final list that it would take me an entire post just to write about each and every one of them, so instead I won't mention any of them. That way, it would do justice to all of them. :)

Phew, what an amazing sale it had been. So, how many games did I buy eventually?

Well, in my previous blog update: "Game Achievements", I had 1305 Games and 488 DLCs before the Sale started. 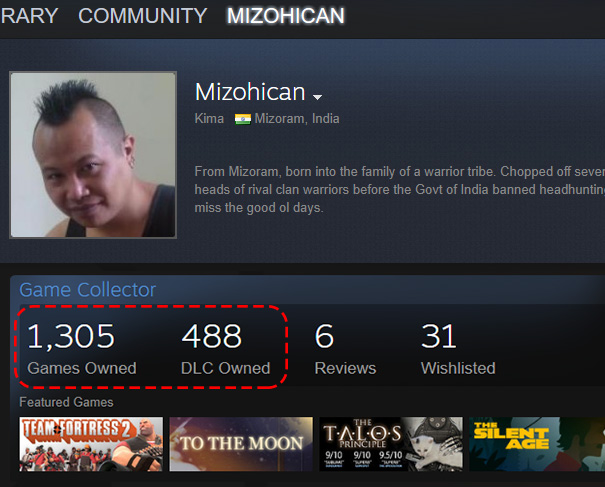 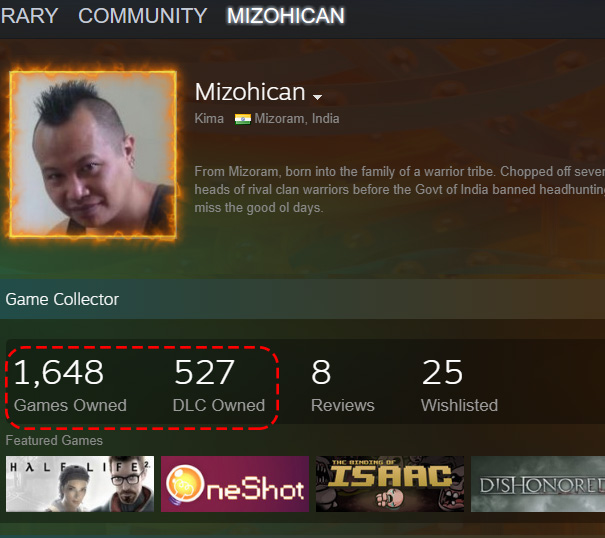 And this amount will actually be more because some of the games I bought are currently marked as "Profile Features Limited" and "Steam is learning about this game". Such games do not feature in the user's Steam game count, achievement count, card count etc.

This happens to new games with very few purchases made so far, or low concurrent player amount, or low rating reviews (Steam hasn't revealed the exact metrics required to categorize a game as such). The bottom line is, Steam verifies such games manually to see if they are proper games or not. Until then, they are marked as such, and this is to prevent unwanted shovelwares and horrible games from flooding the store, so as to maintain a certain standard of quality.

To end this post, I just want to mention that I did keep my promise of bringing up my Average Game Completion rate to above 50% before the Summer sale started :D

These were my stats one week before the Sale started [read: Game Achievements]

And these were my stats when the Sale ended.

Yup. 27 Perfect Games and 10,000+ achievements later (A "Perfect Game" is one where you managed to get all 100% achievements of that game), I was finally able to bring up my Average Game Completion rate from 48% to 54%.

This was definitely not an easy task by all means. I had to play a lot of my old games over and over again to achieve this. This was the reason why I had been away from Facebook and even WhatsApp for the past 3 weeks now.

Sometimes I even skipped meals or sleep because there was no time to lose, one time I coughed out blood and was admitted to the ICU, but I continued playing because I was determined to reach my target. Even while the doctor was busy pumping my chest as I was put on a ventilator, I never stopped playing. And as people laid me in a coffin and lowered me 6 feet under the ground, I finally crossed 50% achievement rate, much to the joy and relief of my family, friends, and the people of Earth.

And so, that is my journey so far. Hope you enjoyed reading this post, and I will try to write about other topics in my next update. Enough of gaming for now. :)

Cheers everyone, until my next update.