Aaaand this is my 50th blog update of the year!

With this post, I have now updated my blog 50 times annually for 14 straight years! I guess it is fair to say I have been consistent with my blog updates longer than most of your relationships. In fact, I've even blogging longer than most marriages out there, lolz.

I even know a couple of people who started reading my blog when they were single, got married, some had kids while others didn't, and then got divorced, and are now reading this very blog post as a single once again, lolz :D Ah the circle of life. :P

So, yeah, don't you dare make fun of my single status :D :P 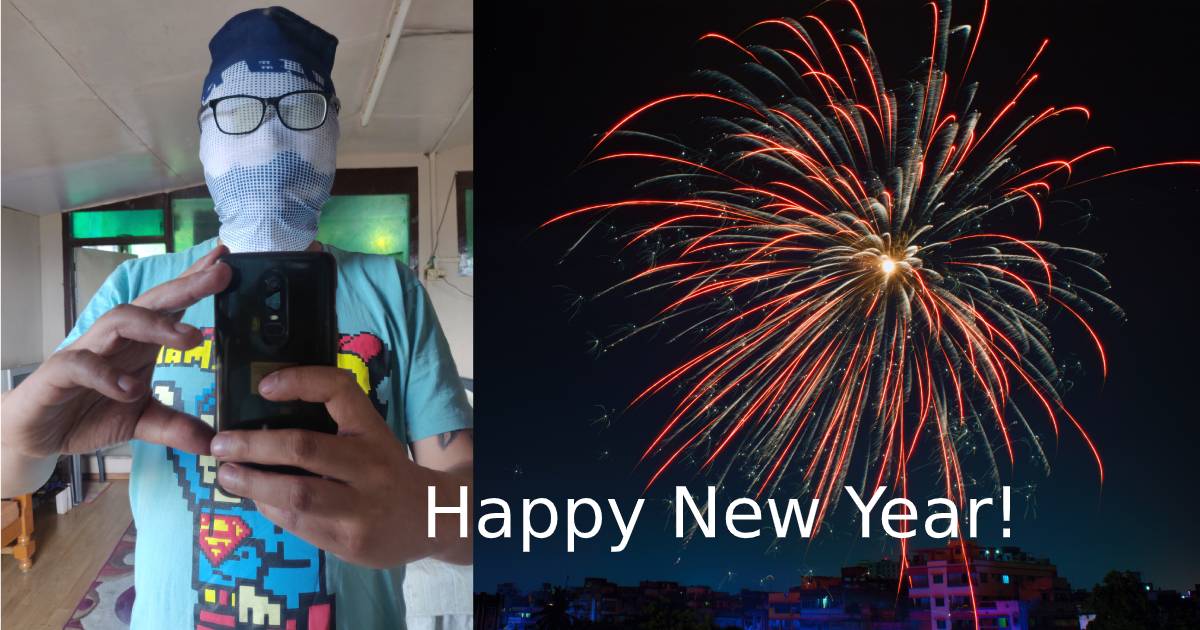 This year had been good to me. The biggest milestone of this year for me was perhaps when I finally completed my gratuity (5 years employment) at a Corporation, and so it was finally time to hang up my boots and say goodbye to the Corporate World.

I've always wanted to complete working for 5 years somewhere, and I almost had that chance when I was at an Advertising agency. After slogging my ass off for 4 years and 10 months as a Copywriter, there was this sudden golden opportunity to create our own gaming Start-Up, with complete investor backing and mentorship from the best incubators in India.

It was a "now or never" moment. I could have just let that train pass and continued working as a Copywriter for another 2 months and get my gratuity, or I could quit right then and venture down a new path of game designing and face the unforeseeable future with my fingers crossed. I finally decided to do the latter, and it had been a dream ride since then.

After 2 years of being a Co-Founder of our own little Start-Up, we got acquired and after 5 more years of working as a Game Designer, I could finally retire from the Corporate World, with enough experience in both Digital Advertising & Marketing along with Game Designing and Production.

Next year onwards, a new chapter of my life will begin. I'll definitely be updating you all on my blog. But before I take on my family business related projects, I also plan to tour Mizoram along with some of the Myanmar border towns and get to know my own roots, something that I have never done in my life before, so get ready for a series of interesting travelogue next year.

So here is me wishing you all a very Happy New Year on this last day of the year, and may the next year bring much fortune and prosperity to you all. Love you all everyone, cheers!

Posted by Mizohican at Tuesday, December 31, 2019 No comments:

Exactly a month ago today, I wrote my last blog update from Pune and then packed up my computer.

A lot had happened since then. The movers and packers arrived at my apartment in Pune that afternoon and quickly packed up my entire belongings.  They were truly professional, making sure everything was packed properly, all fragile items safely bubble-wrapped and every single box water-proofed tightly.

Nothing was broken or missing when I received them in Mizoram 2 weeks later. I didn't even have to pick them up as they were delivered to my doorstep here in Chaltlang! I really recommend "Safe Express" to you all if you're also planning to send home your luggage to Aizawl. All in all, I spent 40K as I had a lot of stuff (my entire life belongings), but it was worth it.

I reached Mizoram on 30th November. The prodigal son had finally returned home, this time for good. However, there was no rejoicing or celebration, as I landed in Mizoram right in the middle of a political shitstorm. The controversial CAB/CAA issue.

Meanwhile, I was facing a personal problem of my own. During the last 2-3 months of my time in Pune, I was starting to get a lot of pimples on my face. It first started slowly, one there, then another one, then another, and so on. There was no need for me to see a doctor as I knew the reason - too much alcohol and red meat consumption.

However, after I completed my Notice Period and left my Organization, I was in Pune for another 2 weeks, as I had some unfinished businesses here and there, and I needed time to pack and stuff. I spent that last 2 weeks binging on food & drink more than ever, along with different farewell parties every other night, such and such that on the night I was leaving Pune, all my pimples flared up!

Even my friends Teresa and Nitin with whom I had spent the previous day with were shocked and horrified to see how much worse my pimples had suddenly become when they came to pick me up to drop me to the airport.

That was how bad my life had suddenly turned to. I covered my face during my entire flight back home, and once I reached my house, I ran inside without even saying hi to my neighbours.

I made an appointment with renowned dermatologist Dr. Mathlengi, and when she saw me at her clinic, she immediately told me to get a blood test first. She checked everything, from my blood sugar to BP to liver to kidneys to a few other tests with acronyms I didn't understand, and fortunately for me, everything was fine! Phew!!!

She prescribed a couple of tablets along with different creams (expensive ones too!) for me, and she also injected steroids (that's what I heard her say) into my face at around 10 different places! Yeah that really freaking hurt! First time in my life I was experiencing that.

I followed her medical treatment regime strictly and also abstained from alcohol for 24 straight days! Right now, all my pimples have healed, but the scars are still there. Dr. Mathlengi told me it will take around a month for the scars to vanish too, so I am pretty happy now, pun unintended :P

If you want to see how I look now (day 27) versus how bad I looked on the day I reached Mizoram, here it is. See the difference. I'm also putting up the picture here because whenever I tell my friends that I can't meet anyone yet because of my pimples, they'd be like "i van lerh em em, a ho lutuk!" Trust me, if you had a face like mine in the first frame below, even you wouldn't want to step out anywhere! 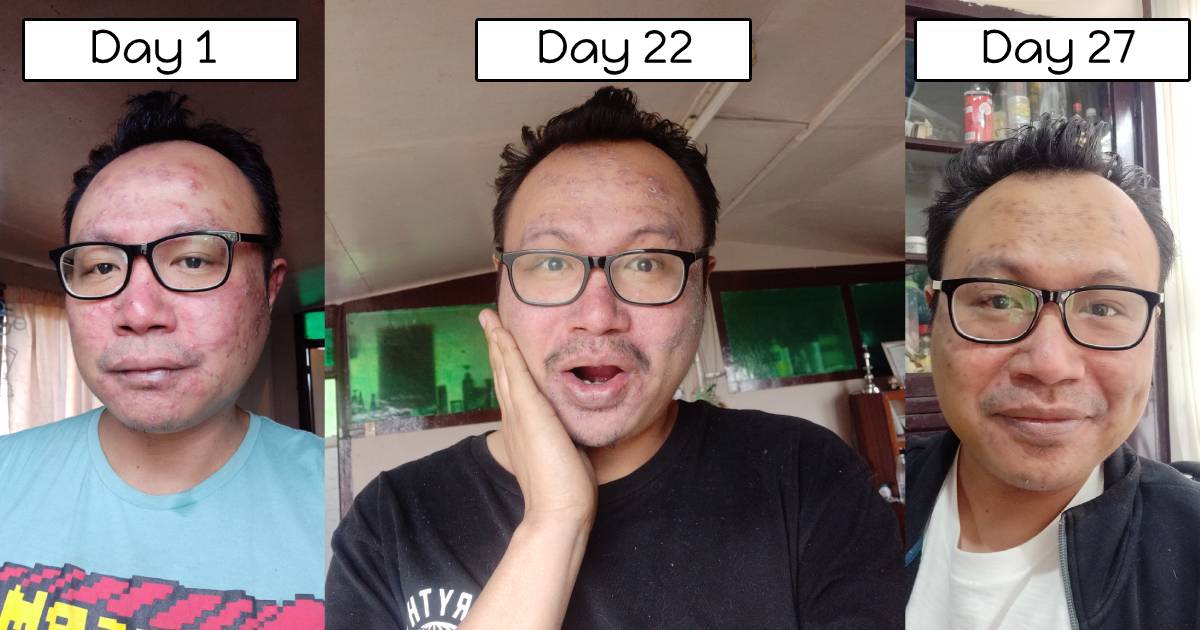 I looked like one of those extras in a survival movie or somebody who's just about to turn into a zombie after being bitten by one.

Other than my appointments with Dr. Mathlengi at her clinic in Chanmari, I remained confined to my house. I didn't go to Church or even to attend the Christmas service or the Christmas community feast the next day. I also cancelled my planned Goa and Bangalore trips, hence missing my dear Mumbai flatmates Sid and Shweta's big wedding! :( I was soooo looking forward to their wedding, especially since I was with them right from the very beginning of their romance and I was the only one from office who knew about their relationship and kept it a secret for so many years.

But being on a self-imposed house arrest until my pimples heal completely, I have come to realized how easily we take things for granted. How we must avoid taking selfies or how much we envy those who do. Now I understand why good looking people care so much about beauty products because not good looking people like me can also be affected. It's like that saying, "How can I face my problem, when my problem is my face?"

On the bright side though, my friends told me that this was the perfect time for me to actually venture out and look for a girlfriend because anybody who can love me when I look like this is somebody who will definitely love me for the rest of my life, lolz.

So until my next blog update with a hopefully much better face, cheers for now everyone.

Posted by Mizohican at Saturday, December 28, 2019 No comments: