I suck at a lot of things, but perhaps what I suck the most in life is probably my taste in shoes. I just cannot seem to have the talent or ability to judge whether a shoe looks good or not. I'm talking about Men's shoes here.

This probably stems from the fact that I've never really cared much about shoes my entire life. Even during my basketball days, I was happy wearing a simple "action" sneakers whereas my teammates (especially my Mizo teammates) were always asking their parents for the latest Air Jordans and Reebok Kamikazes.

Guess my folks were quite fortunate because of that :D

For me, a good shoe used to mean something cheap. Something that I could get at a great bargain. If I see an offer from Jabong or Myntra saying "Buy 3 shoes for just ₹ 700" you can bet your ass I would go for it!

I still remember 4 years I ago when I was in Gurgaon and Delhi on a business trip, my dear friend and fellow blogger Suzanne took me to ZARA at DLF Promenade and selected two shoes for me, just like that.

Suzanne told me my choice of shoes and sense of fashion was horrible, and that's what real friends should do. Be frank with each other. Better than just staring at my shoes in disbelief and then snickering and bitching about my "poor" taste behind my back. You can see the shoes she got for me from the link above. Those were my very first "modern" shoes :)

As the years went by, I continued buying more and more awful shoes, except for maybe 2 or 3 shoes which were selected by my ex. Those were the only good ones I had. And so recently, around two months ago, my friends here in Pune said it's high time I had an intervention.

They sat me down in a room, tied me up to a chair, surrounded me and then lectured me on the importance of having good shoes, and since I'm single again now, they said most women who meet a guy for the first time judge him by the shoes he wears! I seriously didn't know that. Is that really true?

And so we started shopping for new shoes. Thus began my shoe chronicles :P

Just to be clear, these friends of mine who intervened and volunteered to help me shop were all women and they were even more excited than I was to buy my new shoes. Amazing bunch of friends. The first shoe they selected for me was a pair of Vans Prison Issue (Twill). 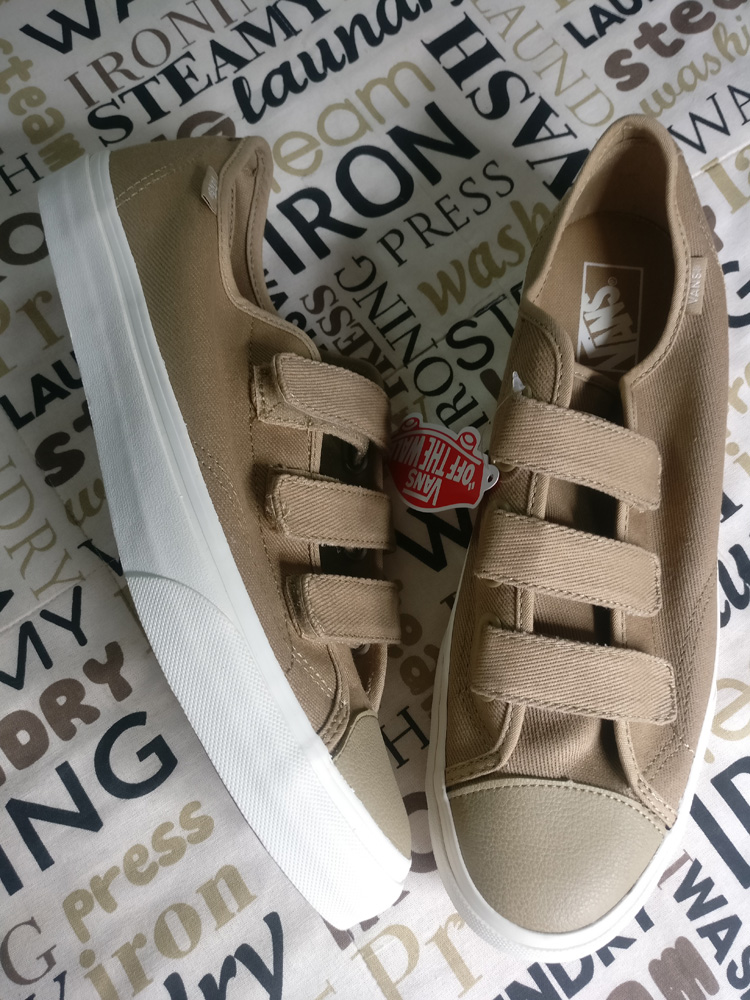 At first I was like, "2500 bucks? No way, look for something below 1000 bucks or even 500 bucks". And then they gave me a tight slap on my head and after that I didn't complain about the cost again.

The second shoe they selected was a United Colors of Benetton Brown 901 sneaker. 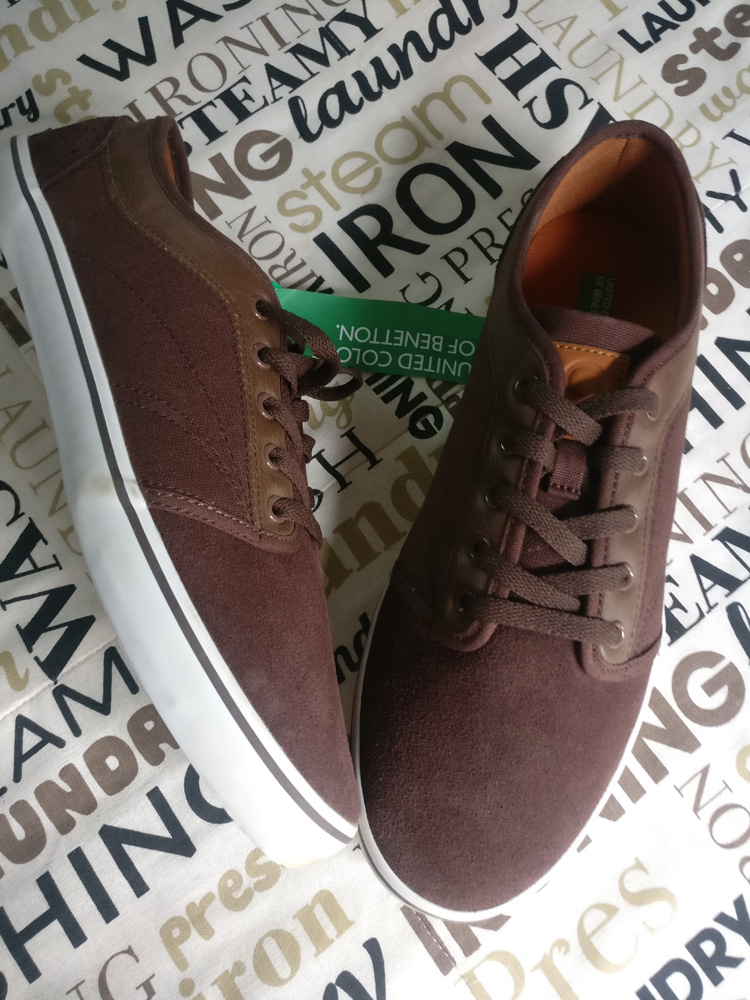 I exclaimed in surprise, "United Colors of Benetton? I thought they make only clothes, when did they start making shoes???" I got another tight slap on my head.

After that they gave me the freedom to select the ones I like. I selected 10. They shot down all 10 immediately. Finally they asked what color I fancied, and I said I didn't have any white shoes, you know, for those days I go golfing or participate at a wine-tasting festival.

Unfortunately, they didn't see past my sarcasm and so they chose Forca by Lifestyle. 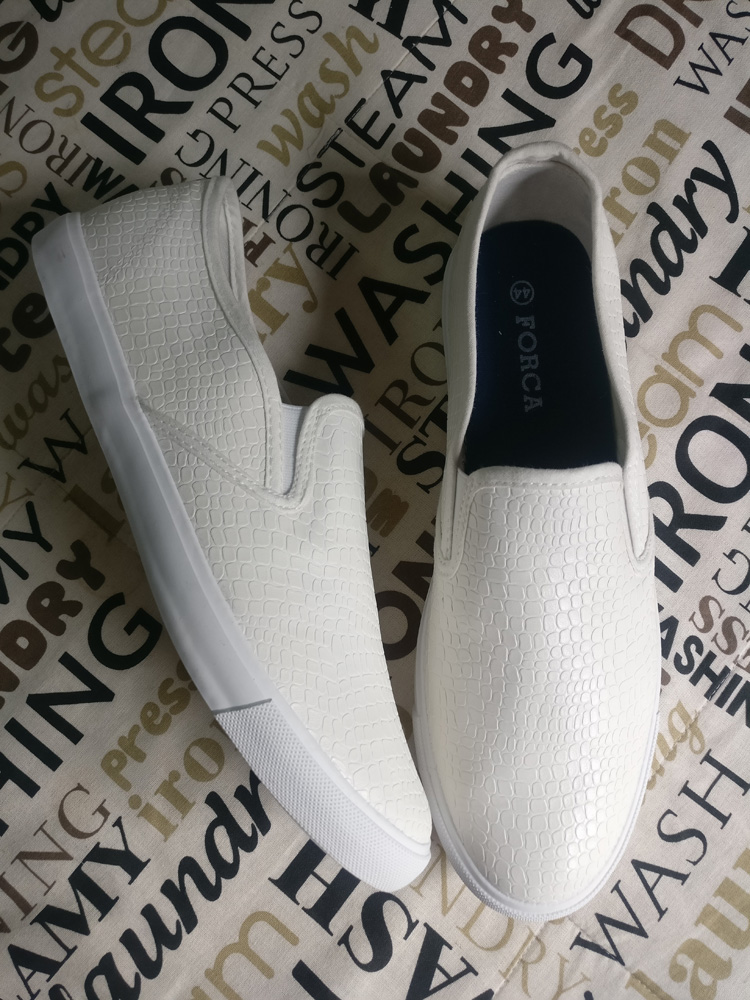 For the fourth shoe, they finally allowed me to buy what I liked. Coffee Loafers by Roadster. They kinda liked the color and were okay with the shape, hence the reason why they allowed me to buy it, though the actual reason why I liked it was because it had a unique strand of jute rope veiled around it! 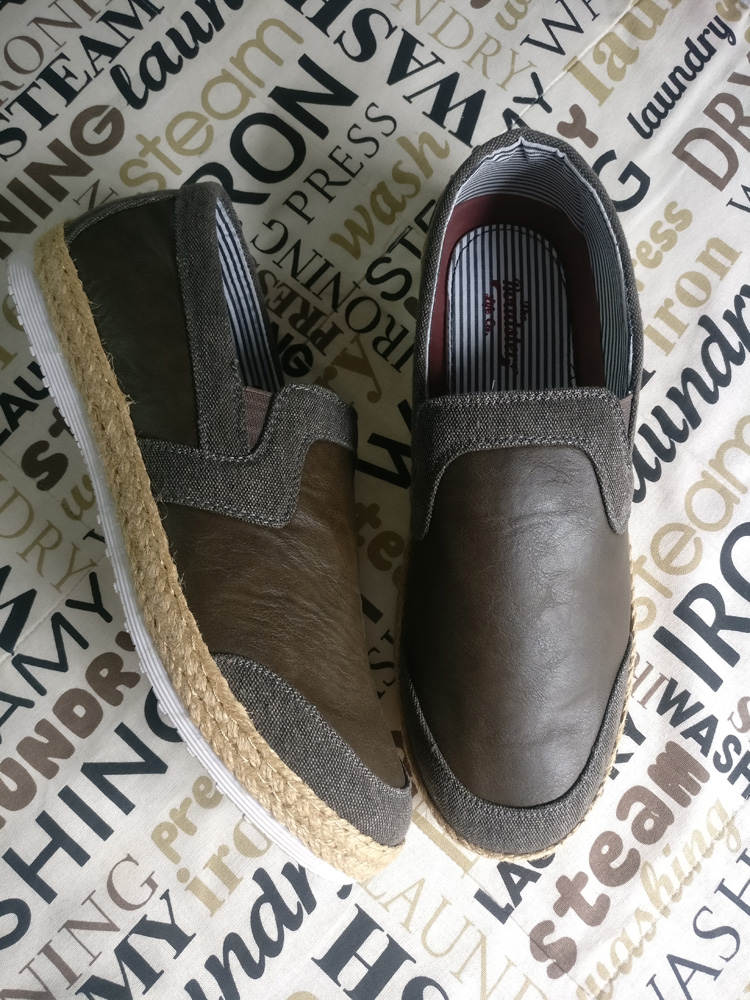 Jute sack, known as "buara bag" in Mizo are used mainly to store sand and bricks. Jute is also used as a rope, so I was thinking if I was out hiking in the jungle alone and I fell in a deep pit, I could easily pull out the jute strands from this shoes and make a rope and climb out. But I didn't tell my friends that was the reason why I wanted it :)

I also bought my first formal shoes from Hush Puppies. 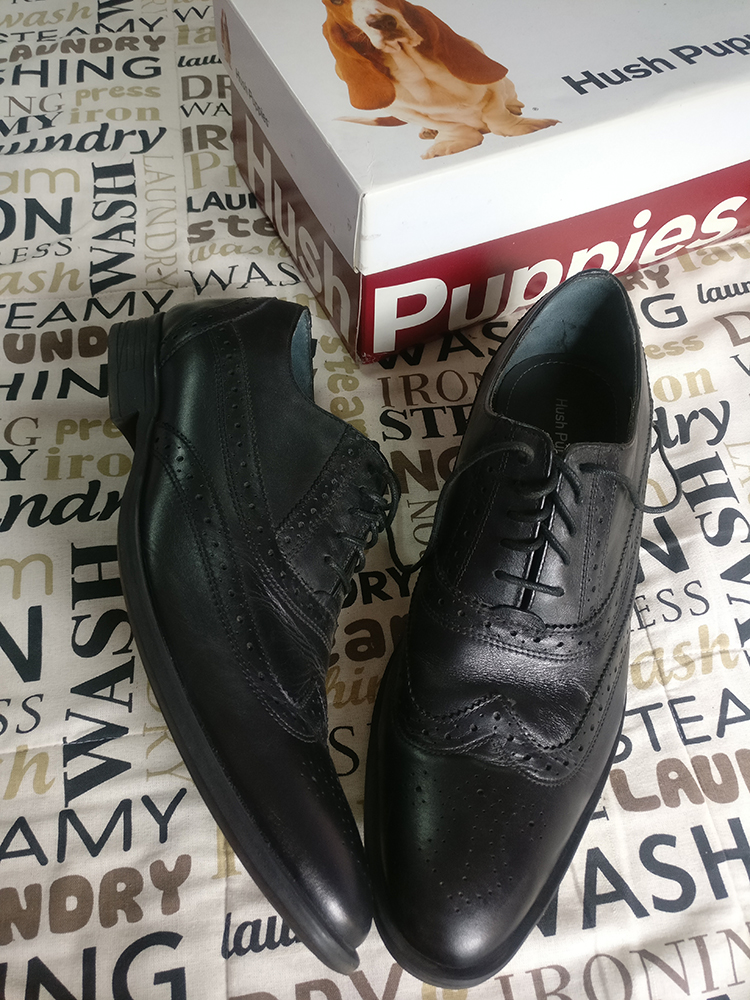 I always thought Hush Puppies had only women's shoes and bags. I was wrong. I even doubted my friends who were selecting the shoe for me and mistakenly asked them, "Wait, how can you know if this formal shoe for men looks good or not? You're all women" I said. "You're such a sexist!" they replied, as they slapped me on my head again. Then they turned around to the other guys in the room and asked all of them, and they all said it was a beautiful shoe.

I even bought new football shoes, because I really needed to start playing and losing weight again. I selected a Fila Men's Restart Football Boot, which was an apt name because I too was just restarting to play again. 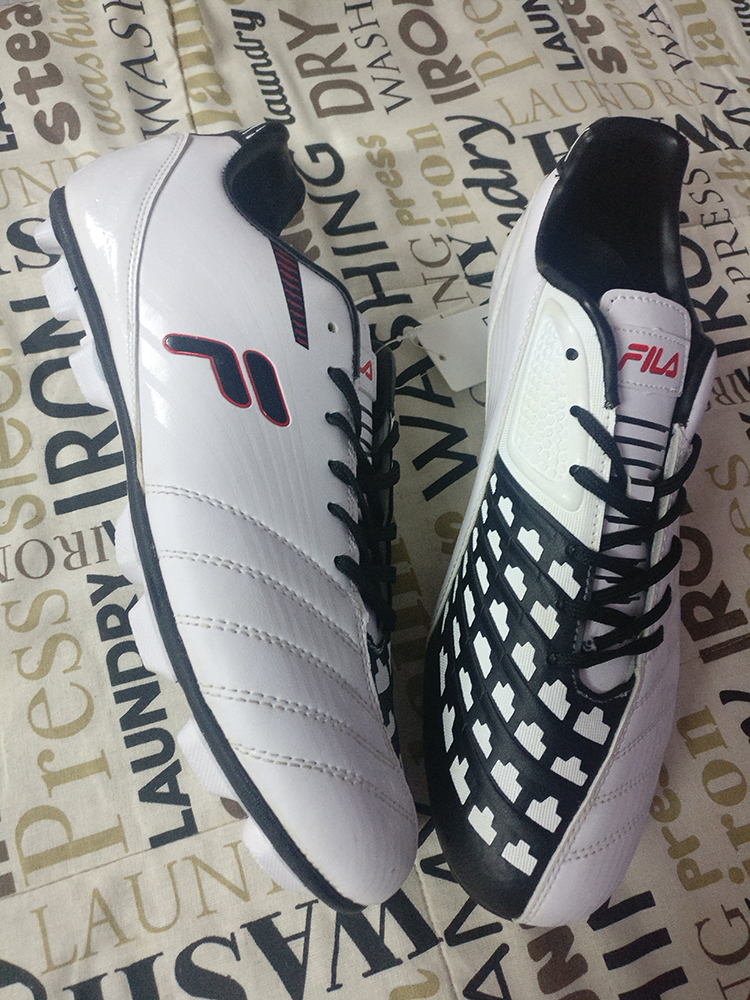 Another shoe my friends really loved, and cursed that it wasn't available in their sizes, was this shoe from United Colors. They were hysterically exclaiming about how awesome the color was, but frankly speaking, I thought it looked like those shoes the CRPF constables used to wear during their morning jogs outside their camp (they used to jog past my house every morning). 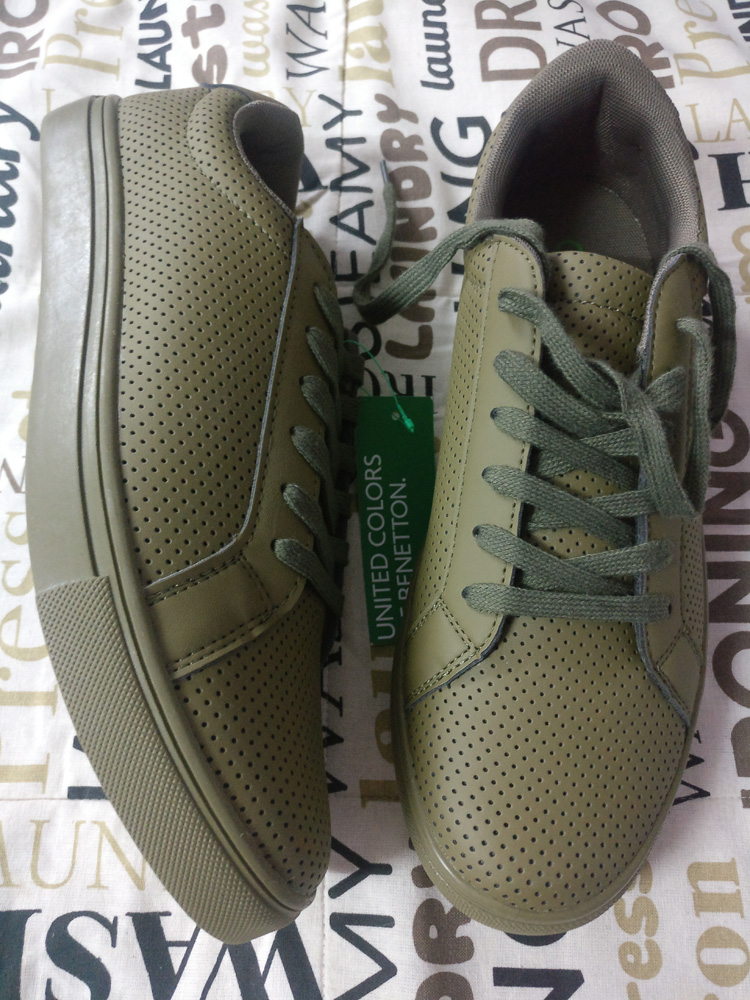 Of course I didn't tell them that, lest I received another smack on my head :D Even other friends who saw this shoe later complimented on how beautiful the color is. I just nodded my head knowingly.

Here is one shoe they selected that I liked. Again from United Colors, a black and white striped loafer. It is extremely comfy as well, not that I'm saying the others are uncomfortable. I think I have worn this to office the most number of times from this list. 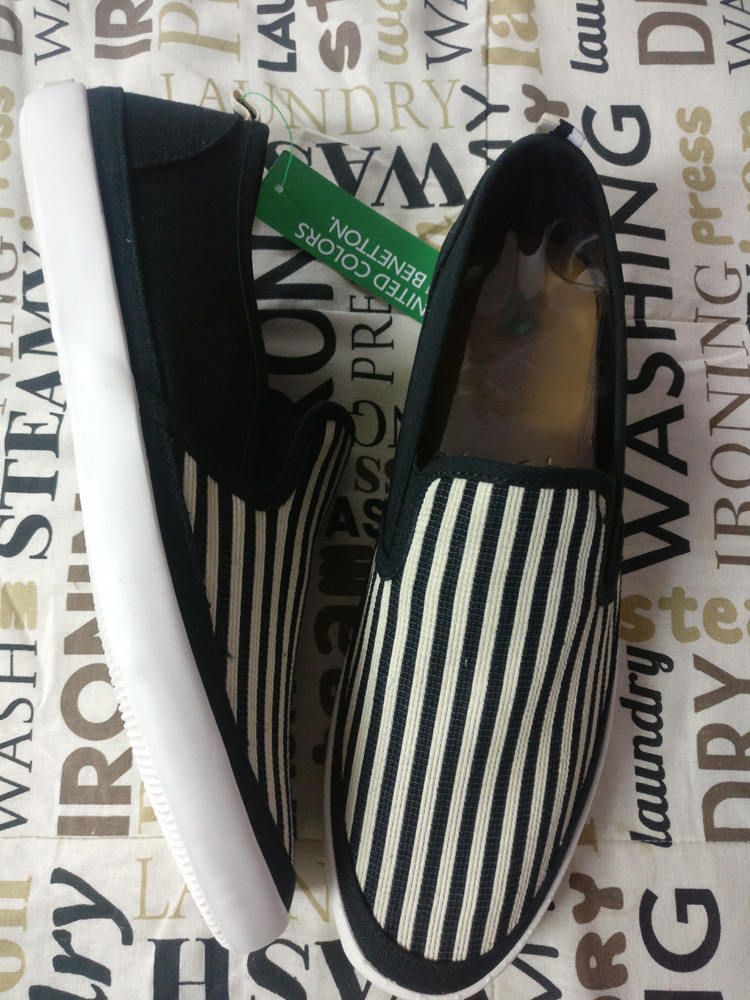 Later I selected this shoe on my own and my friends were relieved that I was finally starting to have a good sense of style. They looked at me with tears in their eyes, happy to see that their baby boy had finally grown up. They gleamed with such pride in their hearts. :P

The one I selected was this Blue Striped Sneakers from United Colors of Benetton. 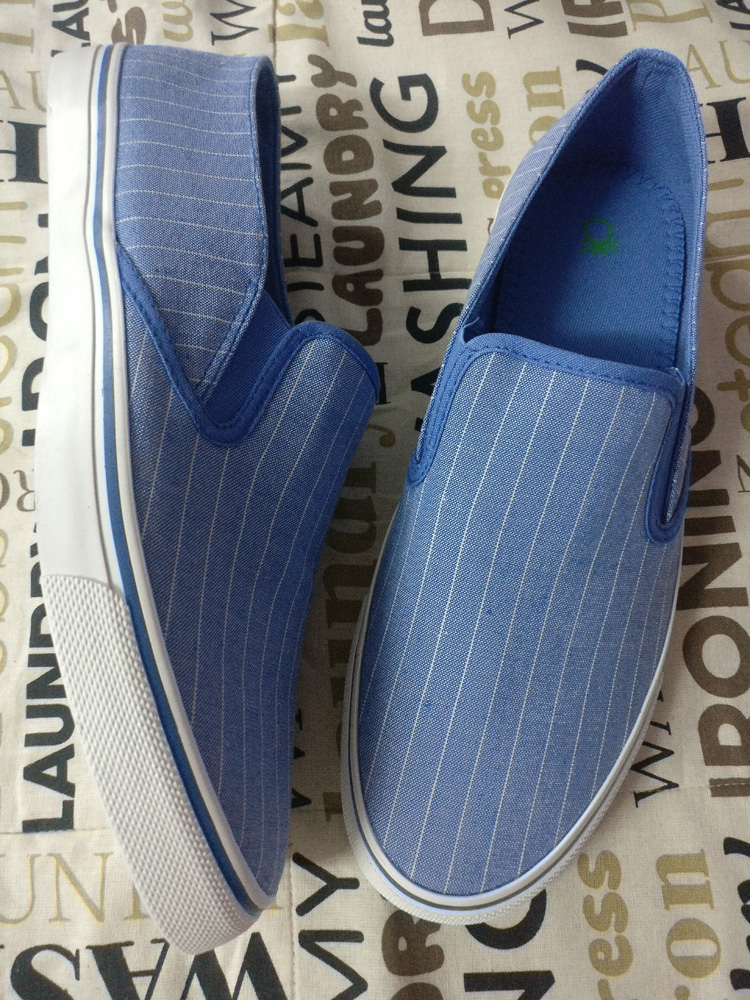 The next shoe I selected was approved immediately too. It was again from United Colors of Benetton. Yeah I was starting to feel the rhythm now. 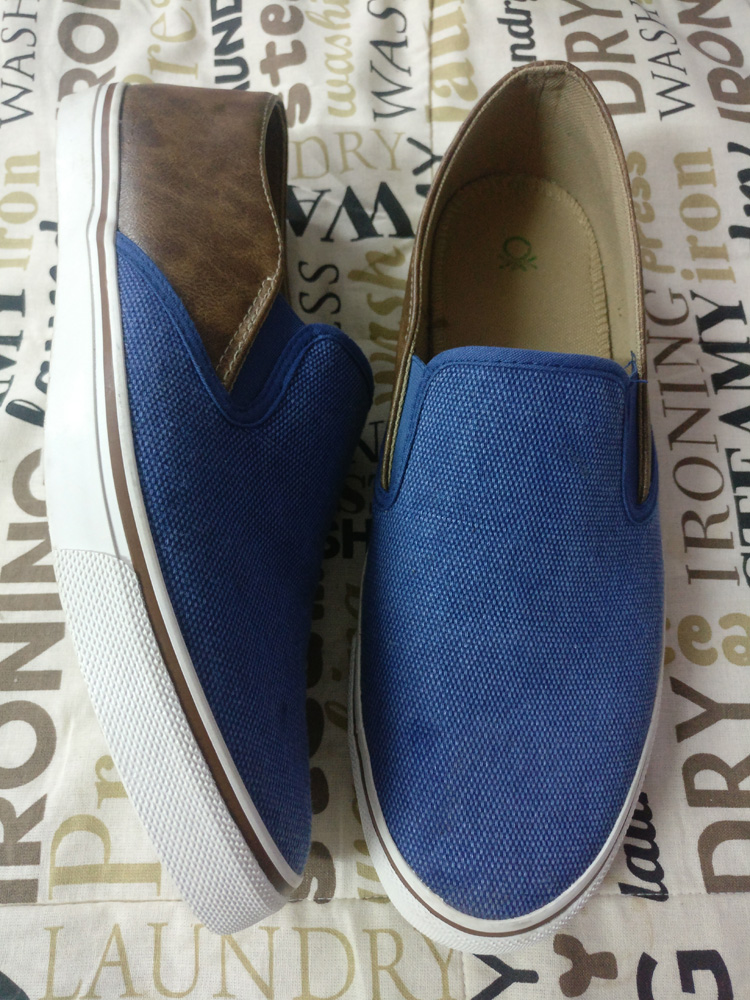 I was so glad that I started talking like a fashionista, telling them how I really love the way the blue and the brown blended together to form a surreal fashion fusion of artistic fashionism without giving away the fashion of this season's fashionic fashion.

They smacked me in the head again :D

Three months ago before going to Goa, my sister and cousin came down to Pune and selected a chappal for me to wear at Goa. It was from H&M and they really loved it, but I absolutely didn't. I even said it was "thring eee", but uh uh, everybody who saw it loved it!

Apparently, that style of sandals is "in" these days. Unfortunately, I'm not putting up a picture of it as I have worn it many times now and I didn't take a picture of it (like the ones in this post) when I bought it that time. But here is another chappal I bought recently that all my friends really love. It's from Hidesign. 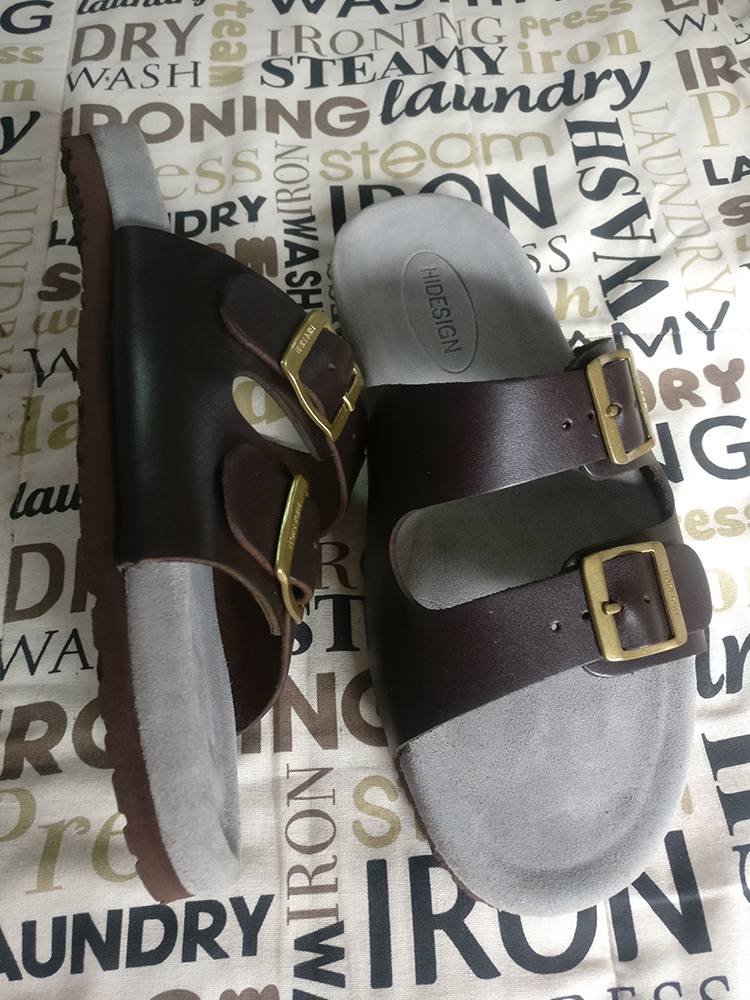 My friends even said I can wear this chappal to a 5 star hotel lounge party or even at my private helicopter and it will still blend in well. Great. Now I only have to buy a helicopter. :P

I also told my friends I wanted boots, but they were against it, telling me that I would never wear it. But I pleaded and pleaded, and so finally I got these two awesome boots - A Mactree Black Boots… 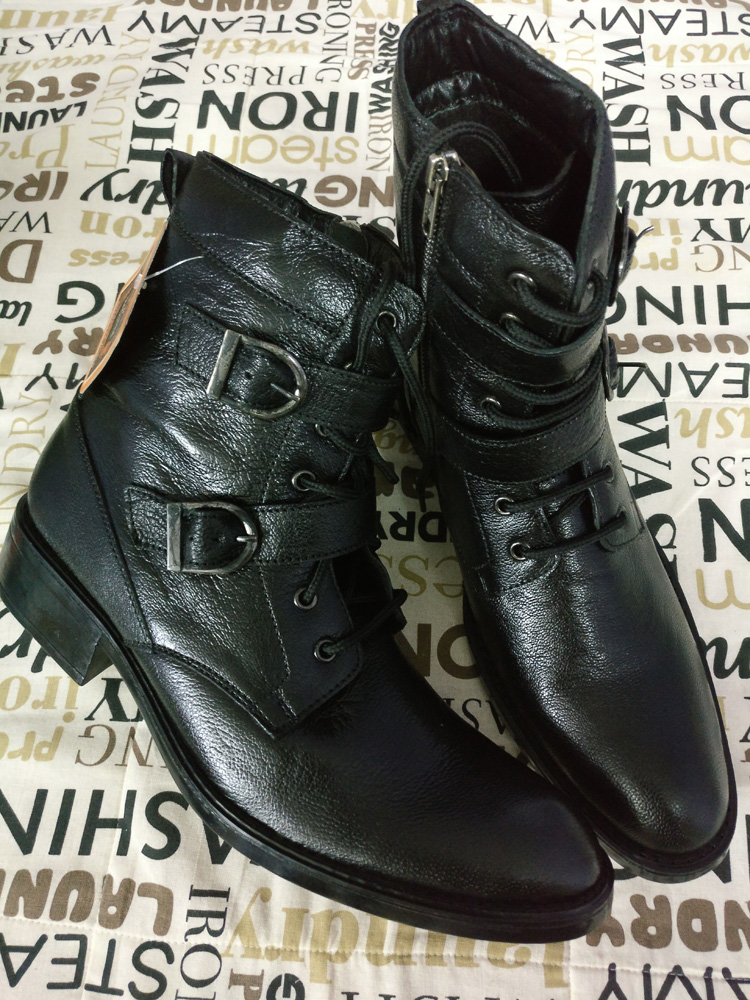 …and a Buckaroo Arnaldo Brown Boots. 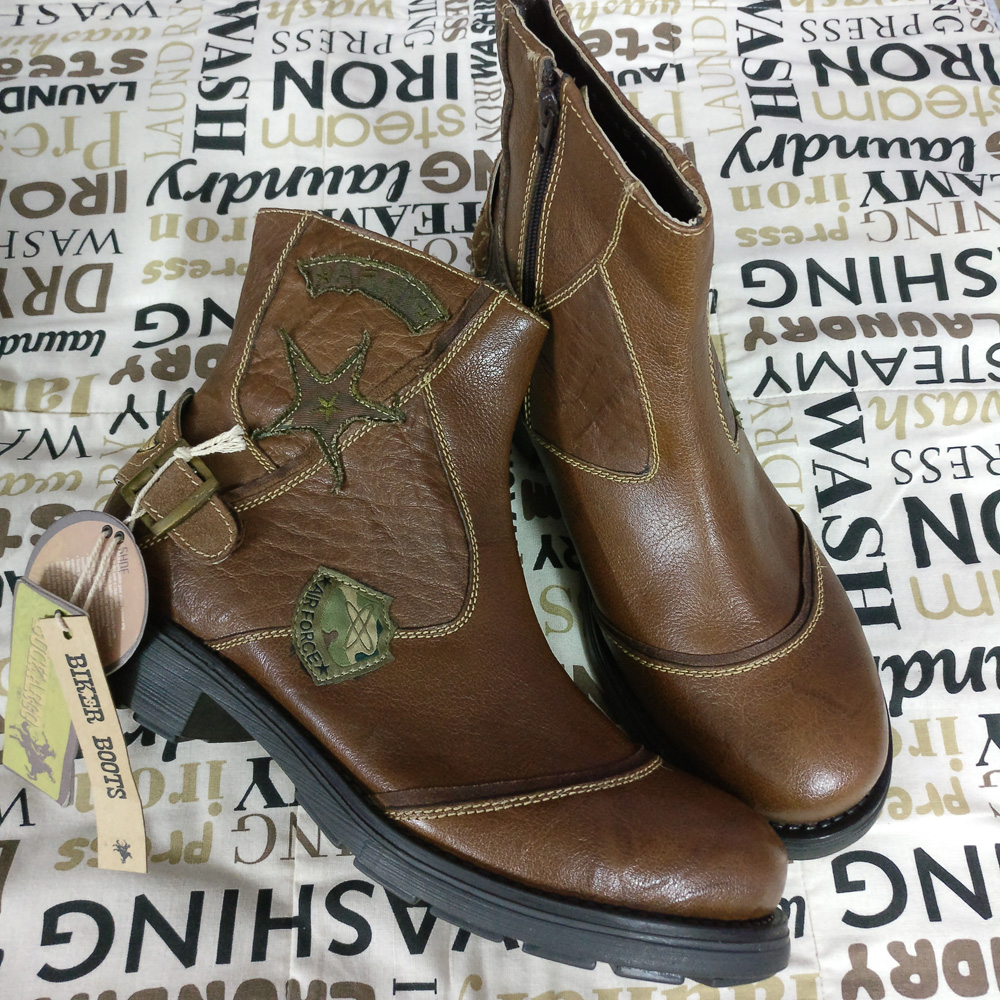 With that, I think I'm all set for the next couple of months. Maybe I'll buy one more shoe, a high-ankle sneaker for basketball as some of my friends play every weekend, but other than that, no more new shoes for the rest of this year.

I think I'm finally starting to understand the value of having good shoes. And yes, I have noticed a few changes ever since I started wearing them to office… Like earlier, none of the women in our office building (comprising of seven different companies) would give me a second look, but the other day, as I was walking across the common cafeteria, I could see all the women glancing at me, some of them nudging their other female friends to look at me… of course later my colleague told me they were looking at me because my fly was wide open, which it was, but hey, it could be because of the shoes too! :D

And just the other night, my friend Zama invited me to his place for a party. He stays just one block away, but since it was raining, I didn't want to get any of my new shoes wet, so I didn't go. Hours later the cops raided his place and took everyone to lock-up. Had I been there, I would have been caught too. See, it’s all because of the new shoes. New shoes are good :)

So that is my short update for this week. In case you hadn't noticed, all the images are now hosted at my own server at AWS. I will slowly be editing my old blog posts too. Until then if you want to view a particular old post which has images disabled, kindly send me a request through mail and I'll keep that post on a higher priority.

Cheers then, happy weekend everyone.

Expensive friends you have. You bought 10+ shoes in a single day!

sad to hear about the ex