To be honest, the past four days didn't feel like the usual lockdown to me, because I finally got to go outside my locality, though the circumstances weren't very favorable. On the afternoon of my birthday, a few minutes after I had just published my birthday blog post, we received a message that one of our cousins and his wife had met with an accident!

Everything was topsy-turvy right then. Multiple people were trying to call them, and of course only one person could get through. Apparently, they were already at Aizawl Civil Hospital, and they were both still disoriented to say anything coherently over the phone.

My nephew went and got a permit from our Local Council, and so my aunty (the accident cousin's mom), her neighbor, my nephew and I rushed to the Civil Hospital Aizawl immediately (we all live together in one colony). 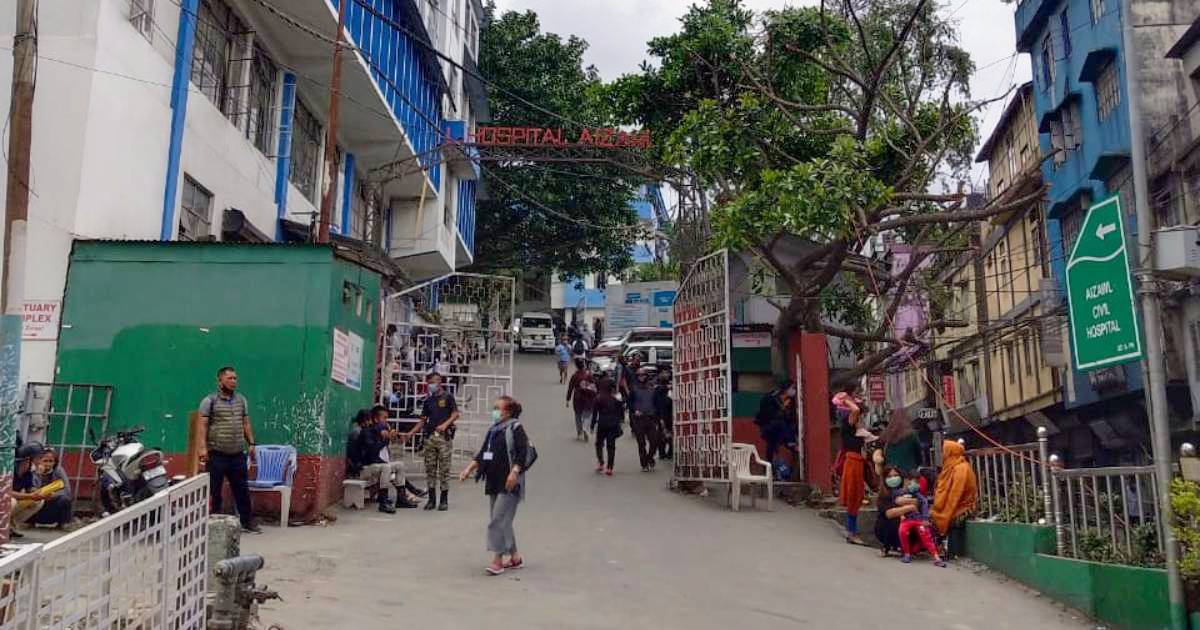 Note the missing "CIVI". :D Happened due to the recent heavy rains and wind, I guess.

Inside Civil Hospital Aizawl, people weren't allowed to enter without masks on. And there were staff members stationed at every department with a hand sanitizer and you must compulsorily sanitize your hands if you want to enter the building. By the way, Civil Hospital Aizawl is a CoVid-19 free hospital.

At the "Casualty", my cousin's wife Fakteii wasn't very serious, thankfully. She just needed a few crepe bandages on her leg. 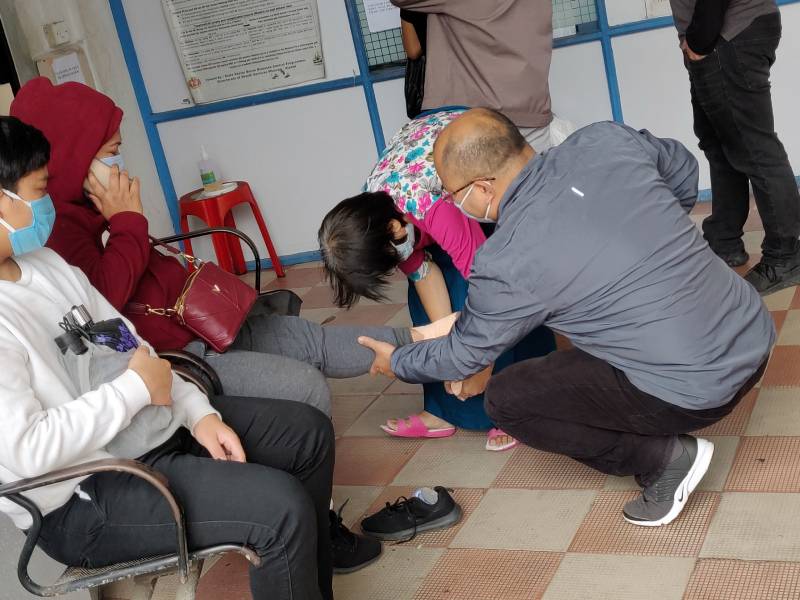 My cousin Hriatpuia too didn't have any injury on his head. However, he couldn't walk and so he had to be wheeled to the X-ray section. 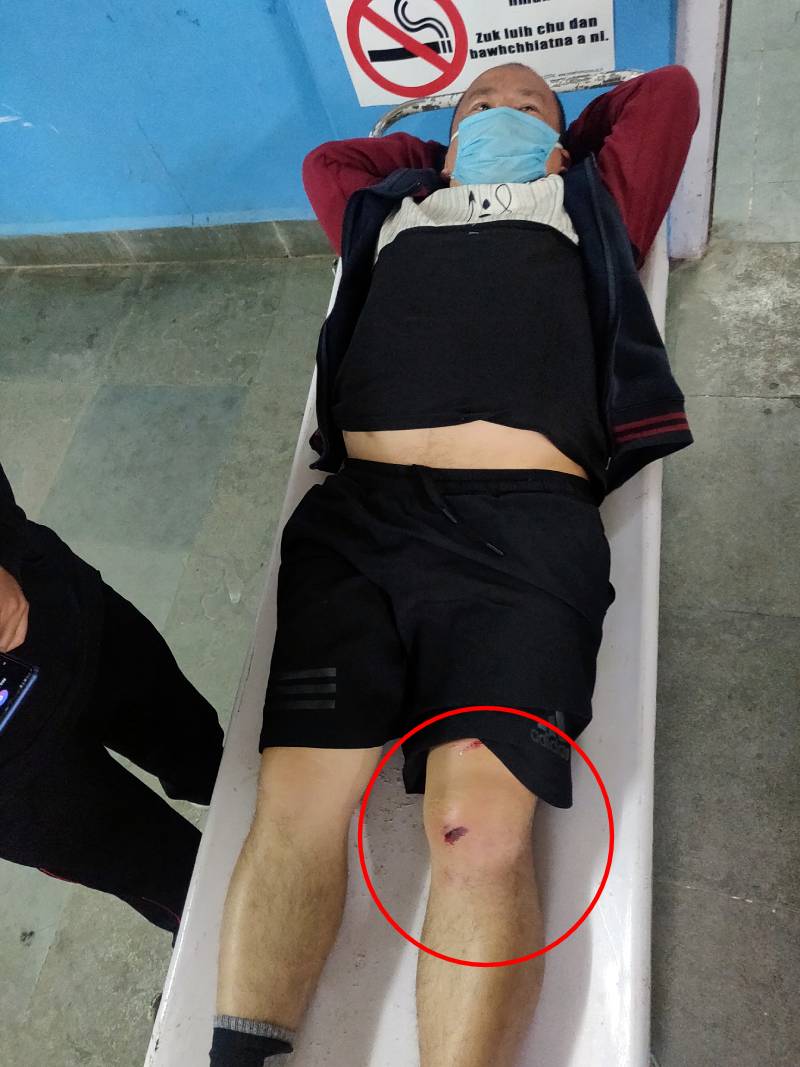 Apparently, they had taken a permit from the Local Council to go and get fresh vegetables from Fakteii's town in a scooty. On their way back, a bike which was speeding from the opposite direction lost control and hit them. Even though it was a head-on collision, they had both braked and slowed down before the impact, and hence the reason why it wasn't a very serious accident. The person who hit them wasn't even injured.

The X-ray results soon came out, and turned out, my cousin had a broken knee, which required an operation!

I was too busy wheeling my cousin on a stretcher from the Casualty to X-ray and back to Casualty and from there to the OPD for dressing and then to the Ortho ward, that I didn't get to take any pictures. Apparently there was this good Samaritan from Saikhamakawn who picked up the injured couple in his car and brought them to Aizawl Civil Hospital.

He refused to accept any cash payment from us, and he left once there were more of us at the hospital. How I wish I had taken his picture just so people could know who the fine gentleman was. Thank you so much, dear stranger from Saikhamakawn, for your kindness and tlawmngaihna.

The traffic police who had been assigned to handle their case was also helping me and my nephew wheel my cousin on a stretcher everywhere, lolz. I slyly asked my nephew if that is what traffic cops normally do, and he told me it is what traffic cops in Mizoram normally do. I love my community so much for this. (For those who don't know, Aizawl Civil Hospital is perched on a hill, so wheeling anybody around the hospital means pushing or pulling the person up or down an extreme slope, which requires even more manpower since my cousin weighs more than 100KG).

Once the dressing was completed, we wheeled him up to the Ortho male ward. 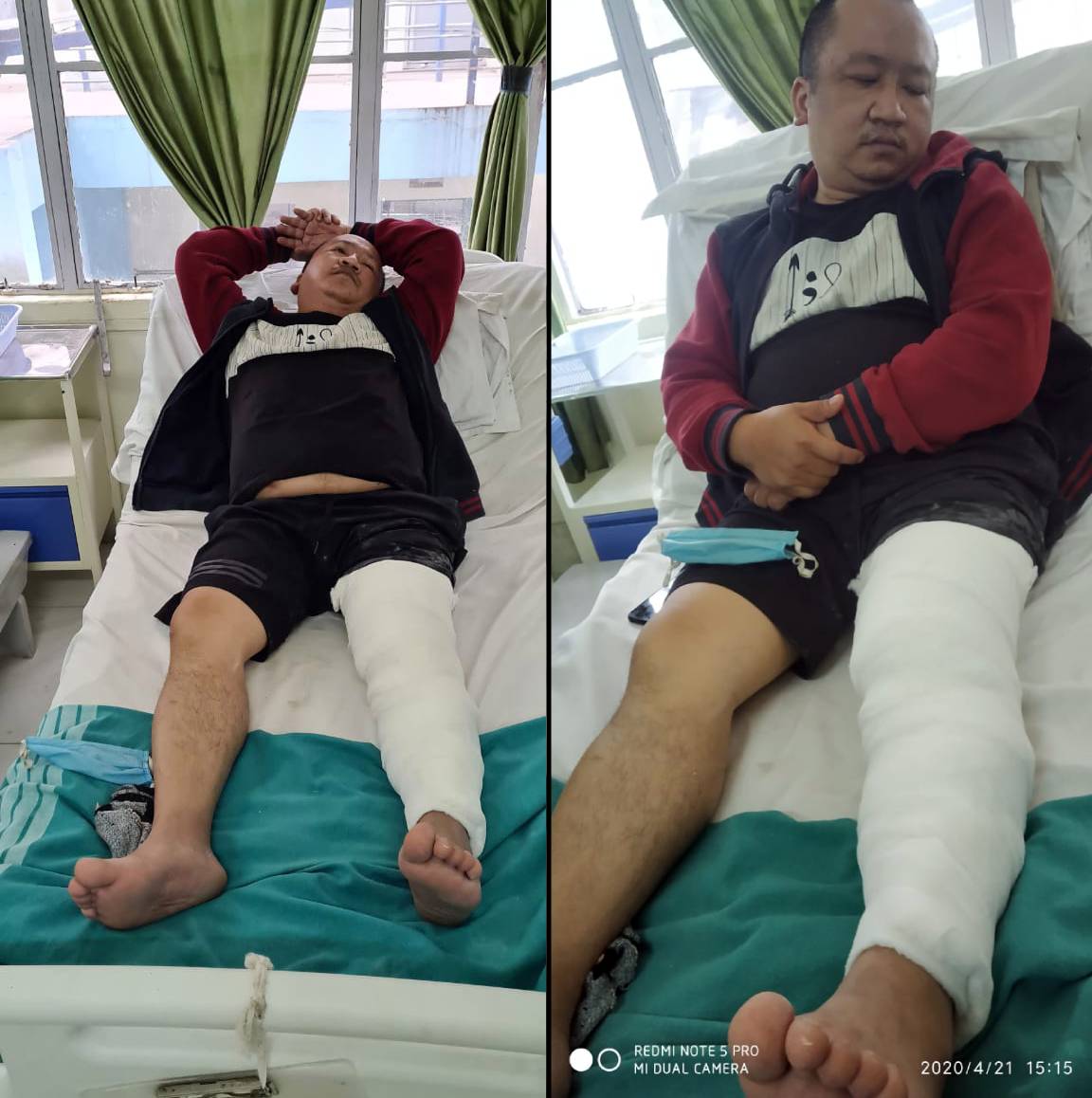 After he was all set up on his bed, the doctors and nurses told all of us to leave the ward immediately. Because of the ongoing pandemic, Civil Hospital Aizawl, which is a Covid-19 free hospital, is currently super strict on visitors and outsiders. 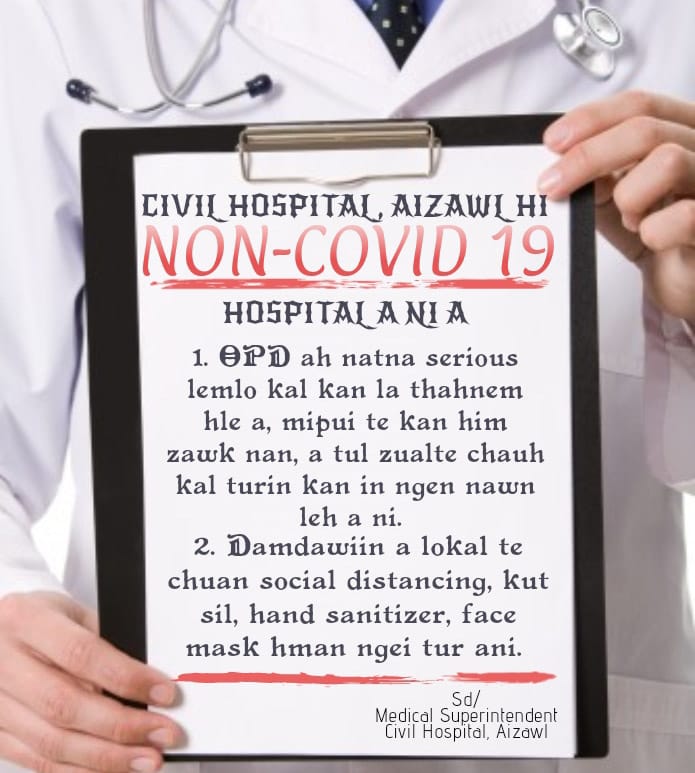 Only one person was allowed to stay behind, and so cousin Atea volunteered to stay with Hriatpuia for the night, while the rest of us left the Ortho ward.

At the Casualty section, we decided among ourselves who should take up different tasks, like who should go and collect the damaged scooty and vegetables, who should transport the injured wife back home, who should sort out the legal issues at the traffic office etc. Since it was still my birthday, I was excused from any of the tasks above and told to go home :D

By the way, no case was filed by us at the Police Station as the guilty party who hit them wasn't under the influence of alcohol and they were just driving faster than usual because of the empty roads. They extended their utmost apology and offered to pay all medical expenditures, and in our Mizo society, that is accepted.

I did get to meet my friend Jonathan Lalhmangaihzuala Chinzah at the hospital though. 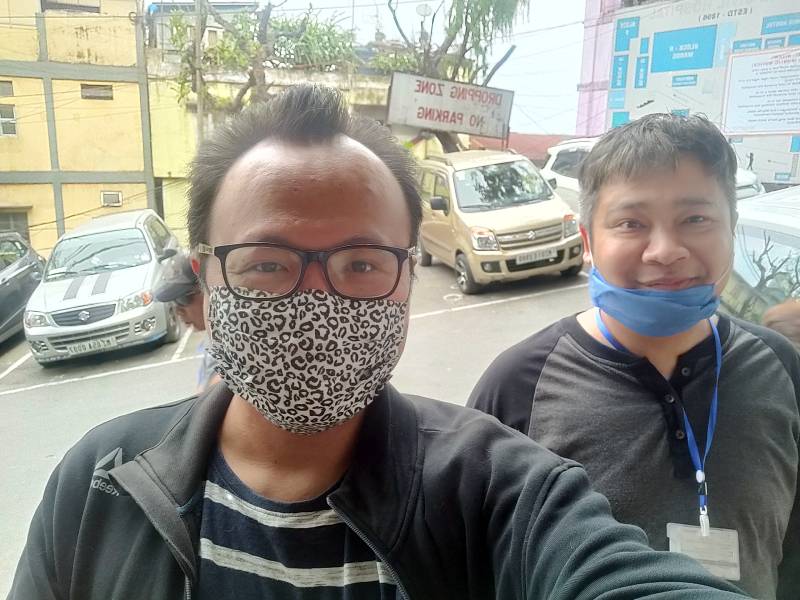 I didn't recognize him with his mask on initially, but when I saw a guy ignoring a 90-years old woman asking him for directions because he was too busy playing "Hustle Castle" on his mobile phone, I kinda suspected it could be him. And then he turned to the doctors and told them to use a resurrect mage with legendary amulet to bring the dead bodies back to life, I knew at once that the person had to be none other than Jonathan. :P

The next day was the surgery.

My nephew Ngaihawma went and got a permit for the two of us as we wanted to reach earlier than the rest of our family to help with the lifting and carrying. 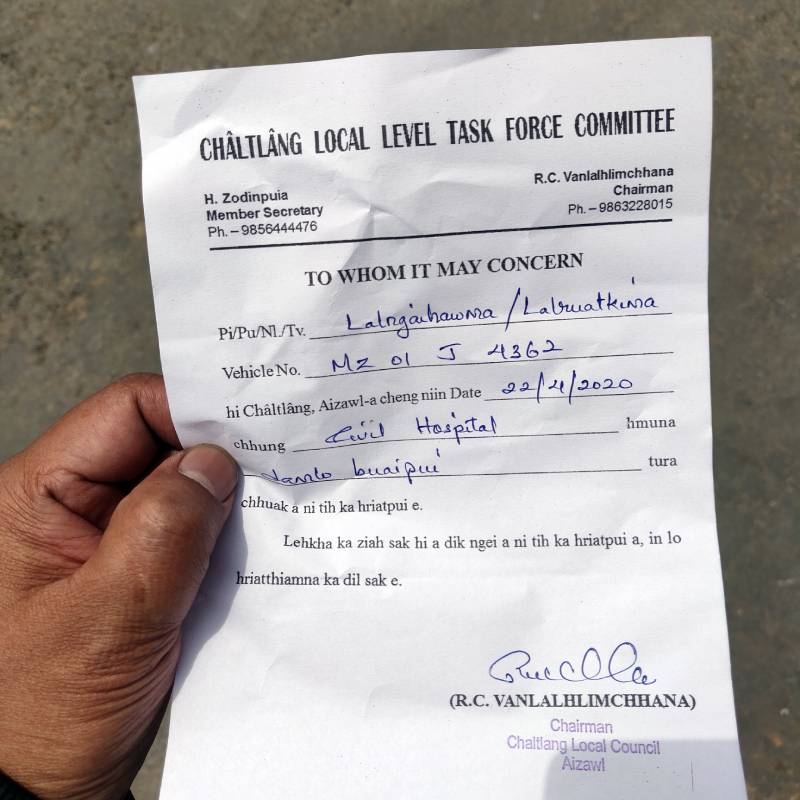 Unfortunately, our Local Task Force members were having breakfast, and by the time we waited for them and they finally gave us the pass, the surgery had already started. Luckily other cousins like Dingkima and Sangliana had reached in time to help cousin Atea with the lifting. 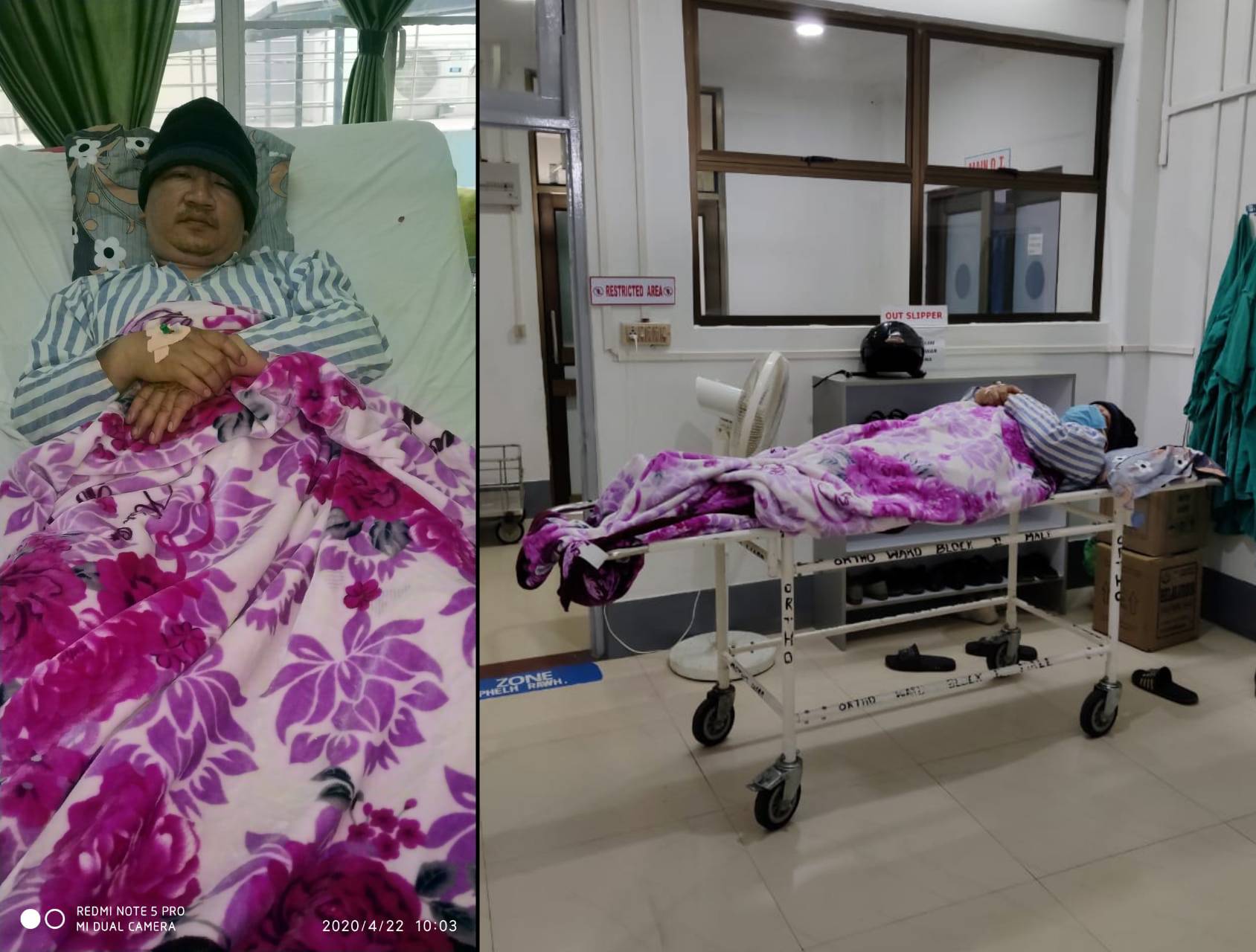 And so we waited for the surgery to get over. From what we were told, it wasn't serious, but in medical terms, it came under a "major operation". 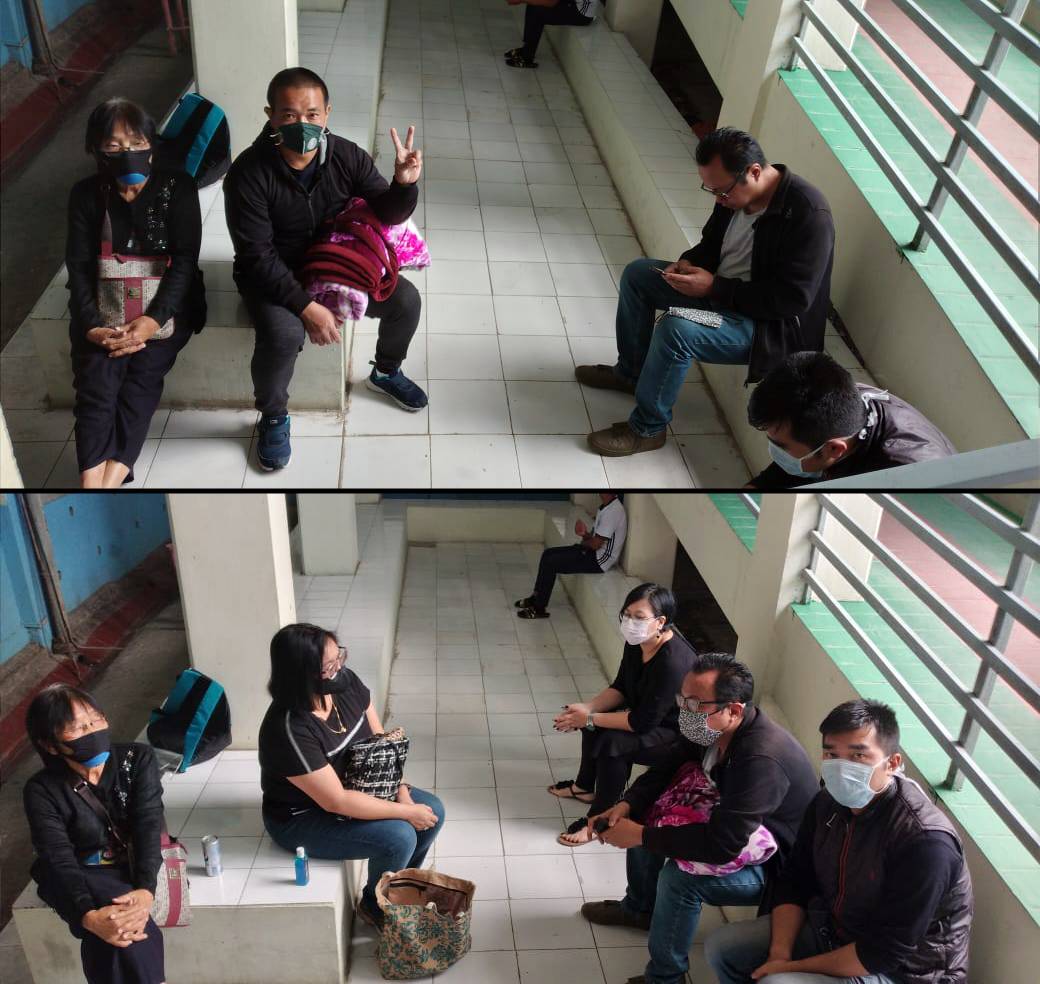 Finally, it was over in less than an hour! Operation success. We wheeled him back to the Ortho ward. 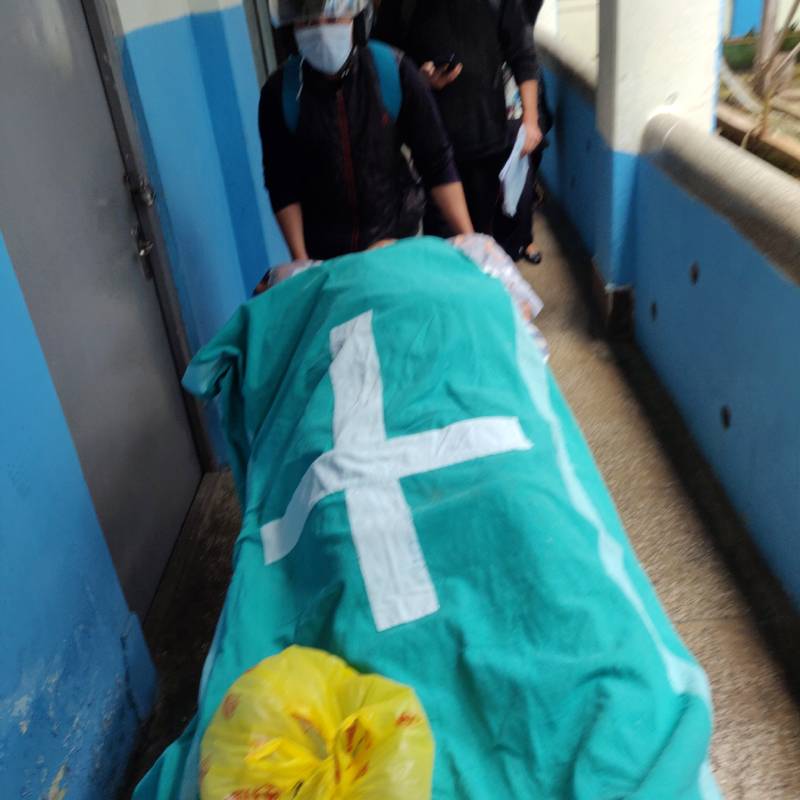 We had to be extremely careful as we placed him back on his bed. 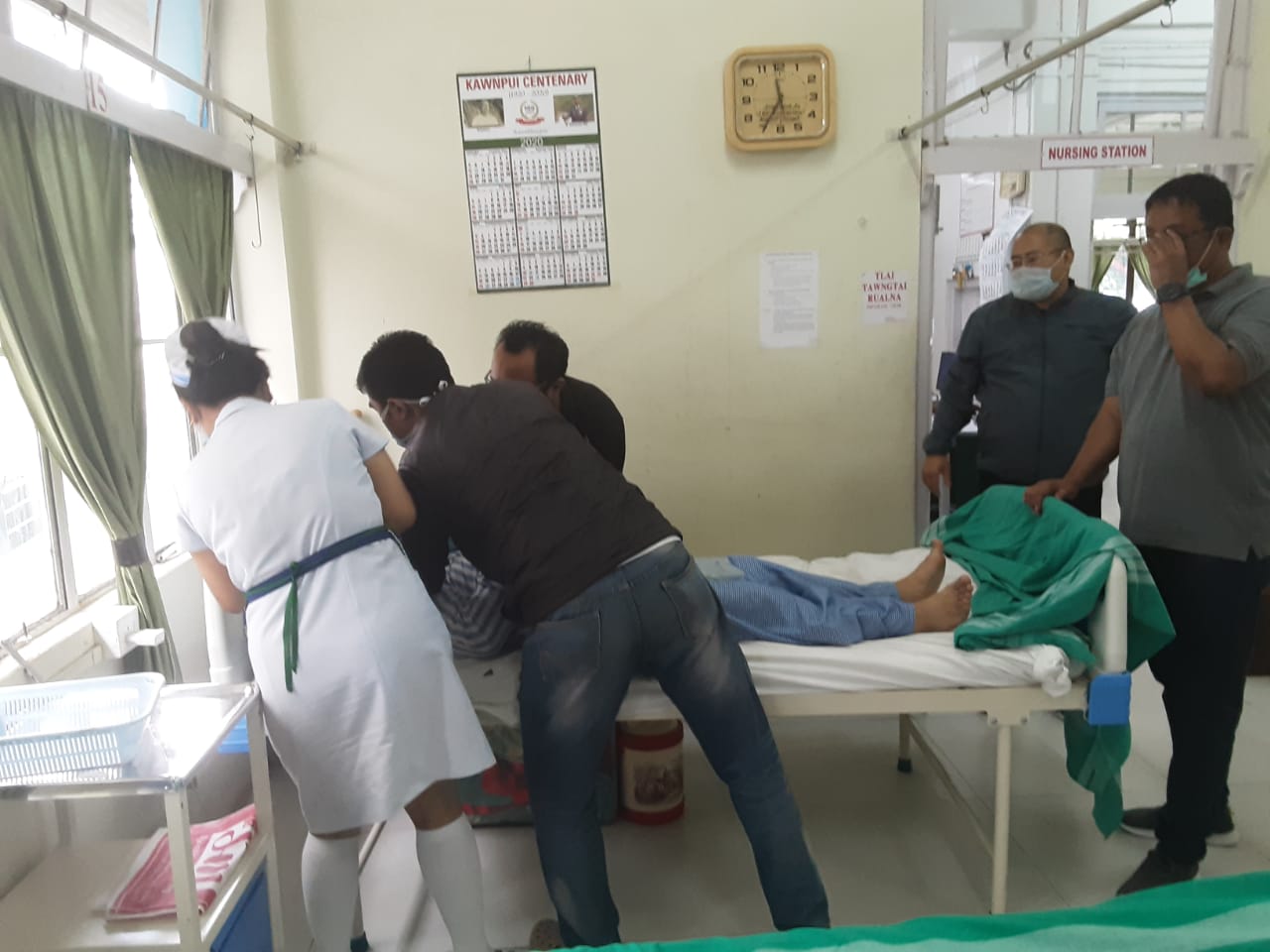 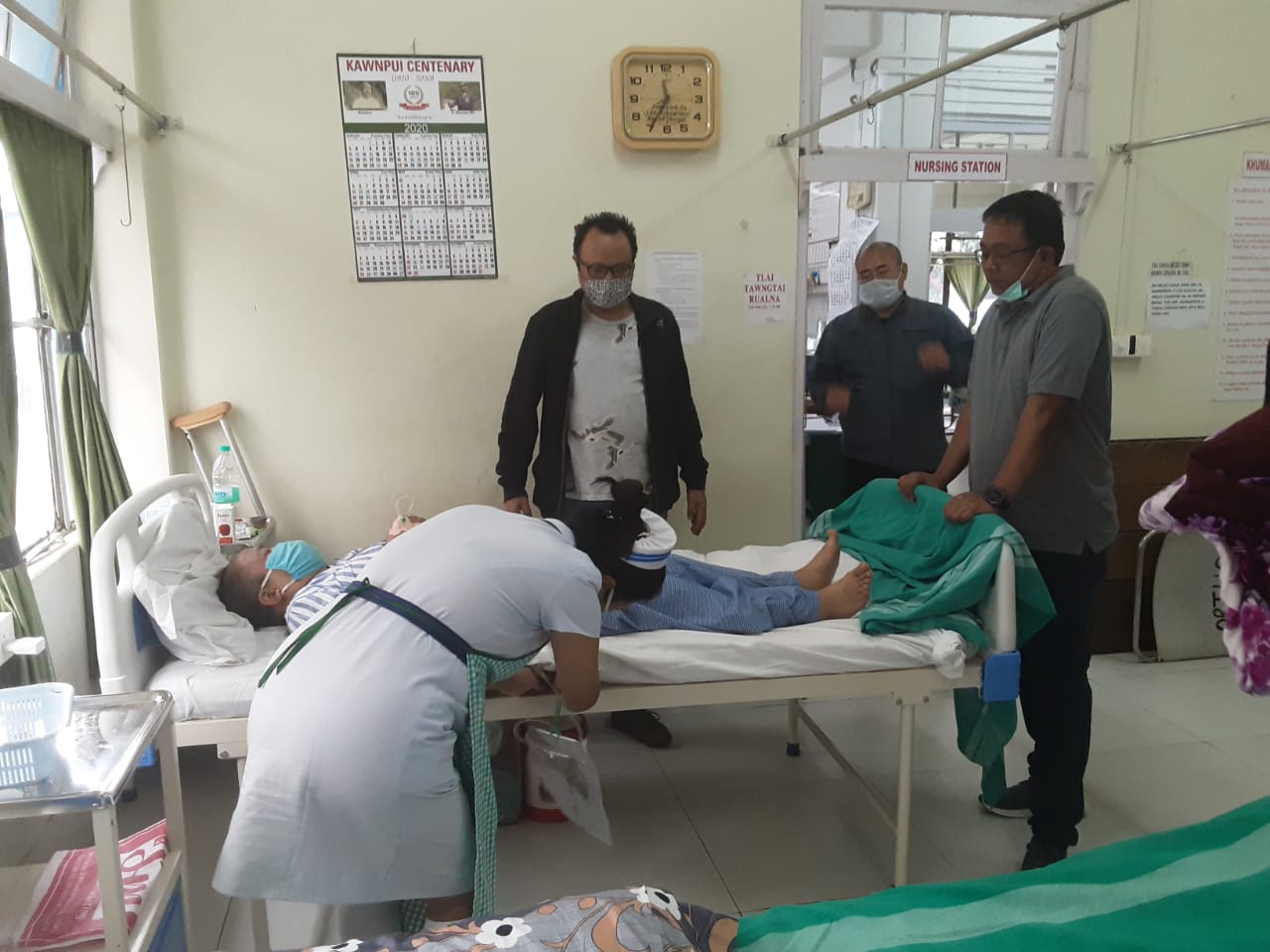 Soon, he was neatly tucked inside his bed :) 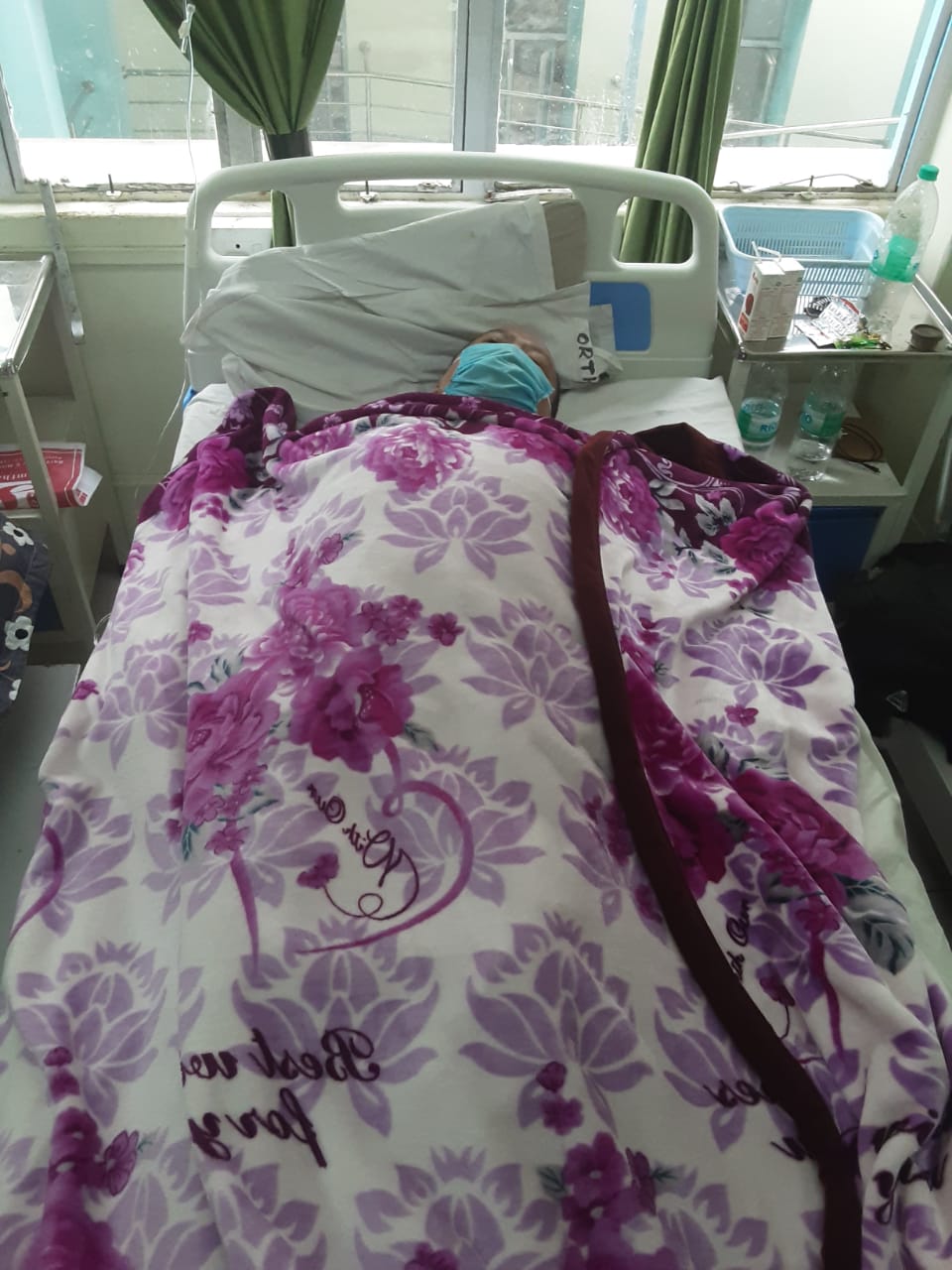 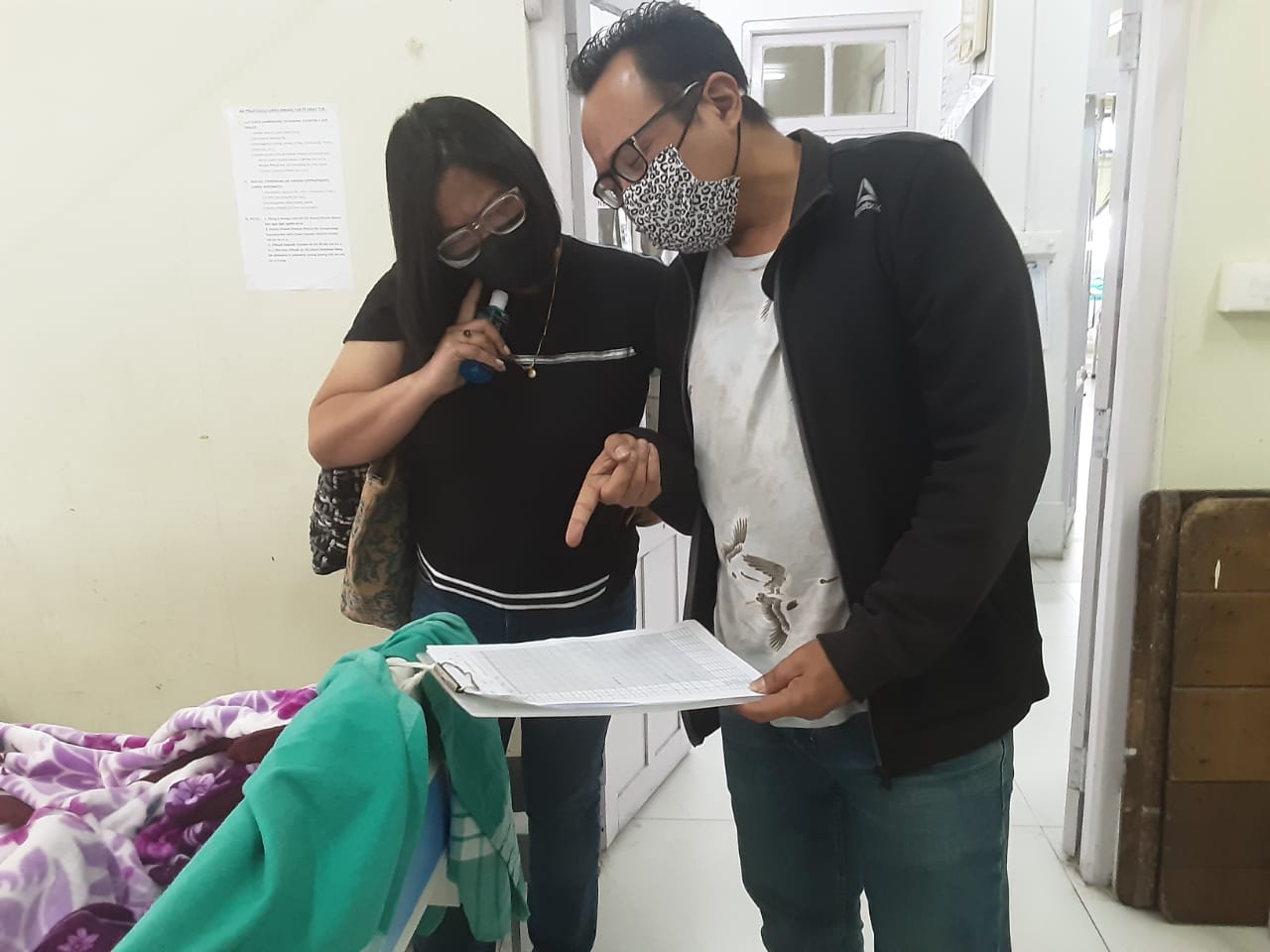 Dr. Love is not just an MBBS (Mizo Bachelor Boy Single) but he is also a very famous emotional-heart specialist :P

And so we bid our cousin farewell for the day as the nurses told us all to leave. Cousin Atea again volunteered to stay for the night, and the nurses also didn't allow different night companions being rotated among us due to the CoVid-19 issue. 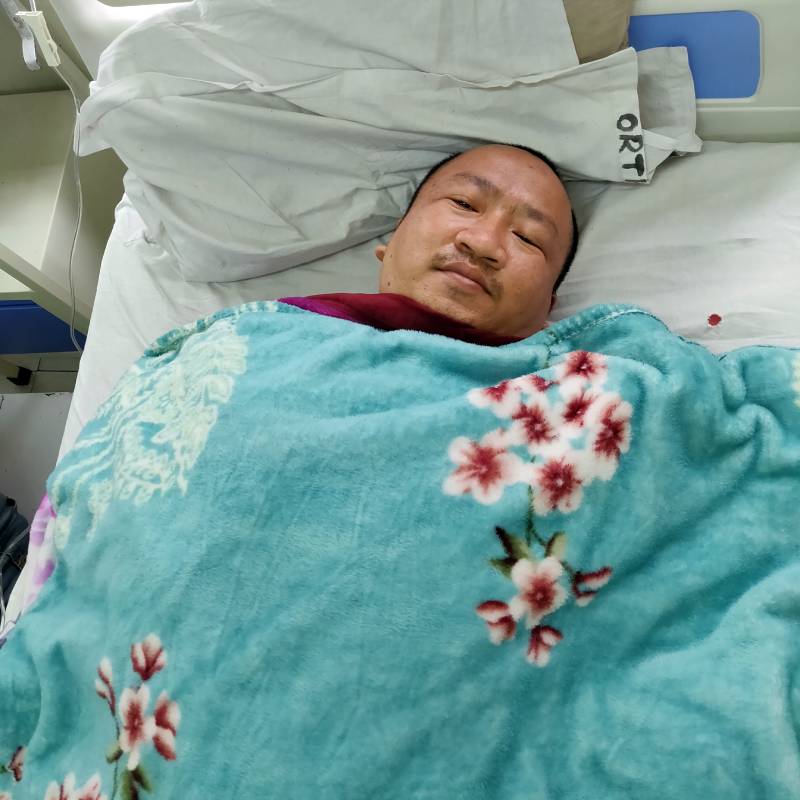 The next day, we were told early in the morning that "bodies" were required to carry my cousin for an X-ray. We went to get a permit but our Local Task Force office was empty as they were all eating breakfast, but instead of waiting like the previous day, this time we went to the Local Council President's house directly to get the permit.

And so, my nephew Ramozz and I went to Civil Hospital Aizawl immediately after that. 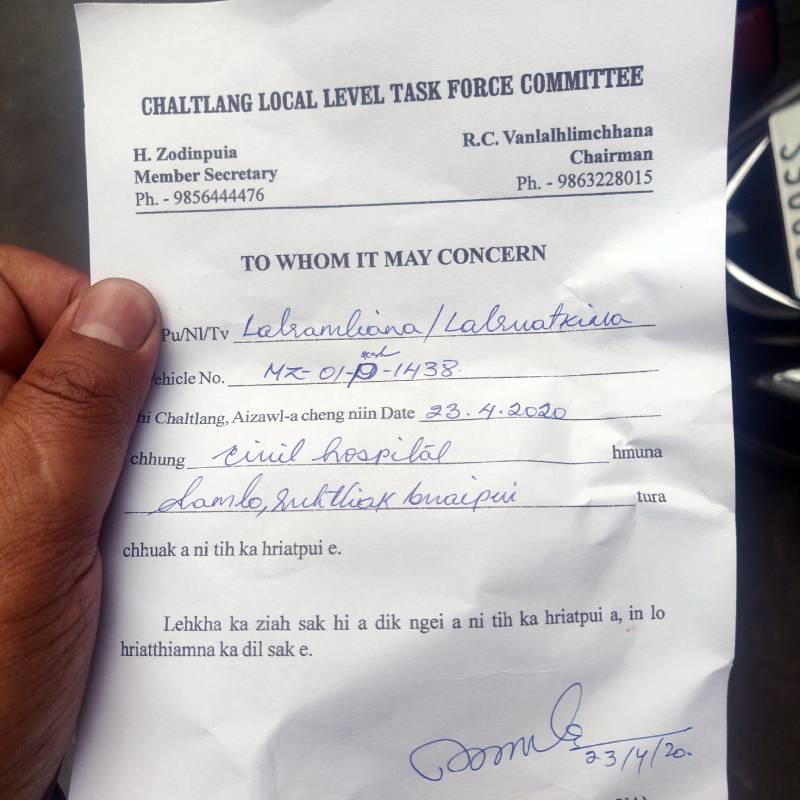 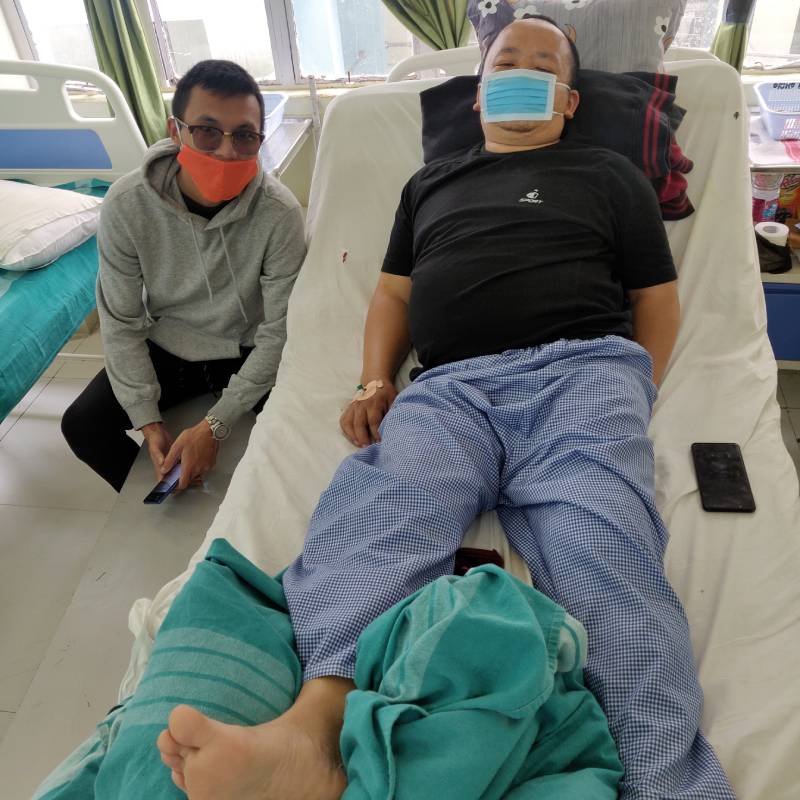 After carefully transferring him onto the stretcher, the two of us dragged him down the narrow winding pathways. 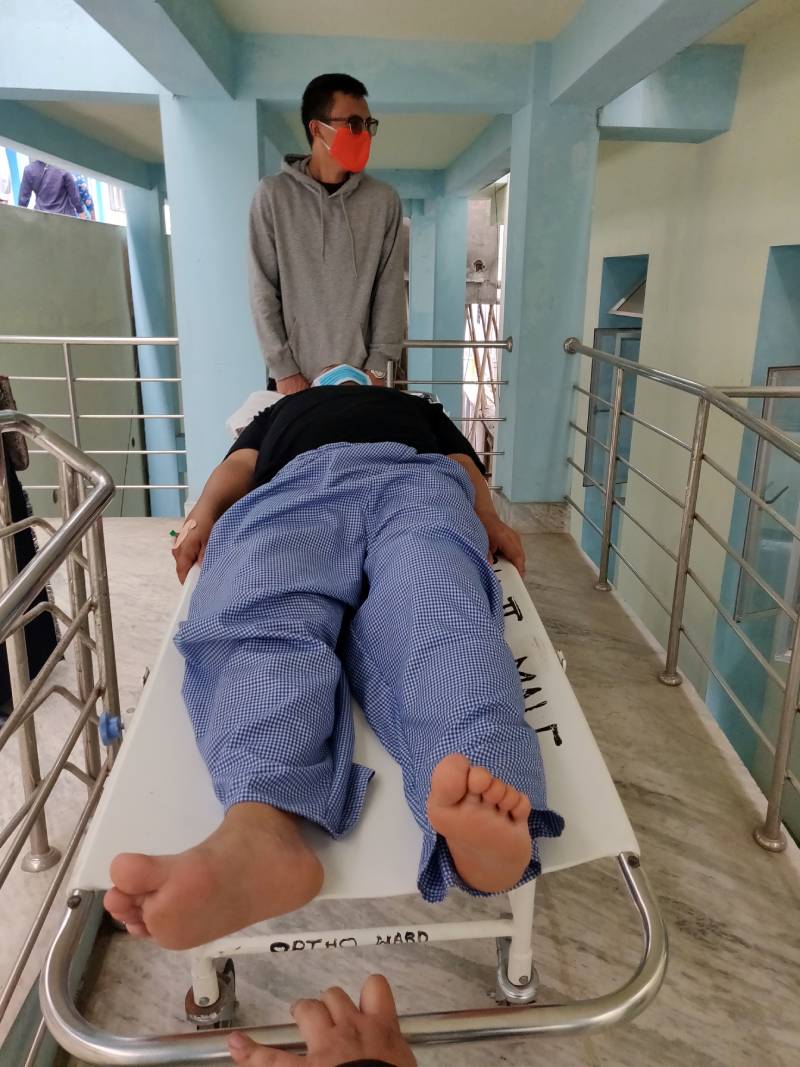 At the X-ray section, there were already a couple of patients waiting in line, but we were given priority due to our situation. 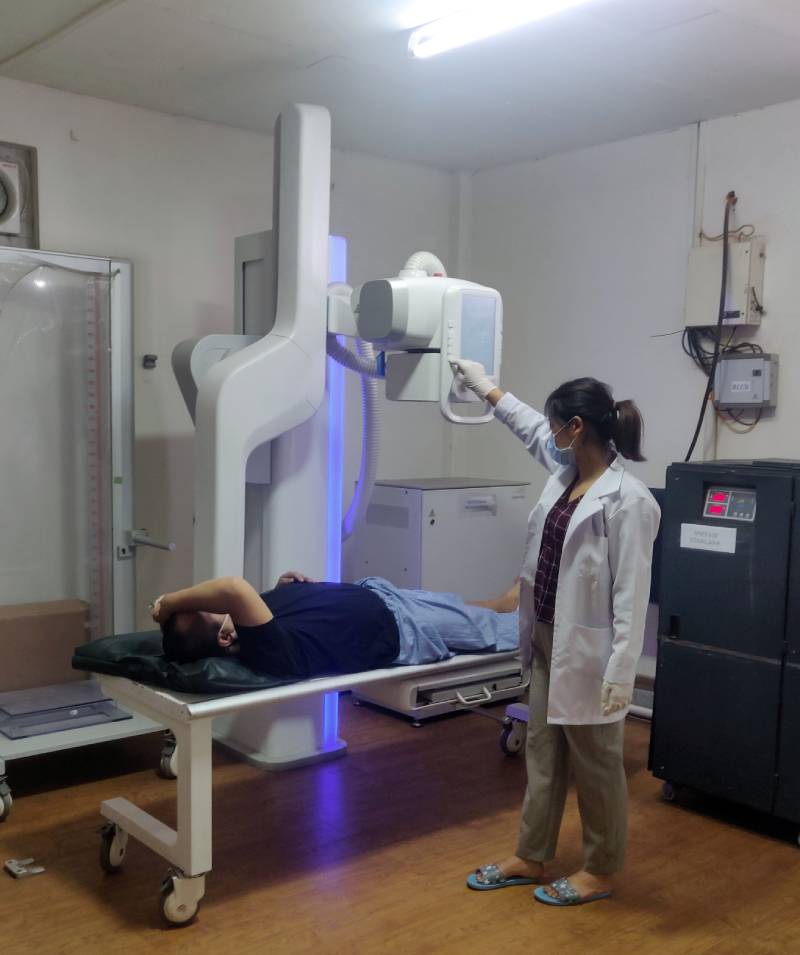 Another nephew Xavier arrived and once the X-ray was over, Xavier and Ramozz dragged him up on the stretcher back to the Ortho ward, while I was finally free to take pics, lolz. 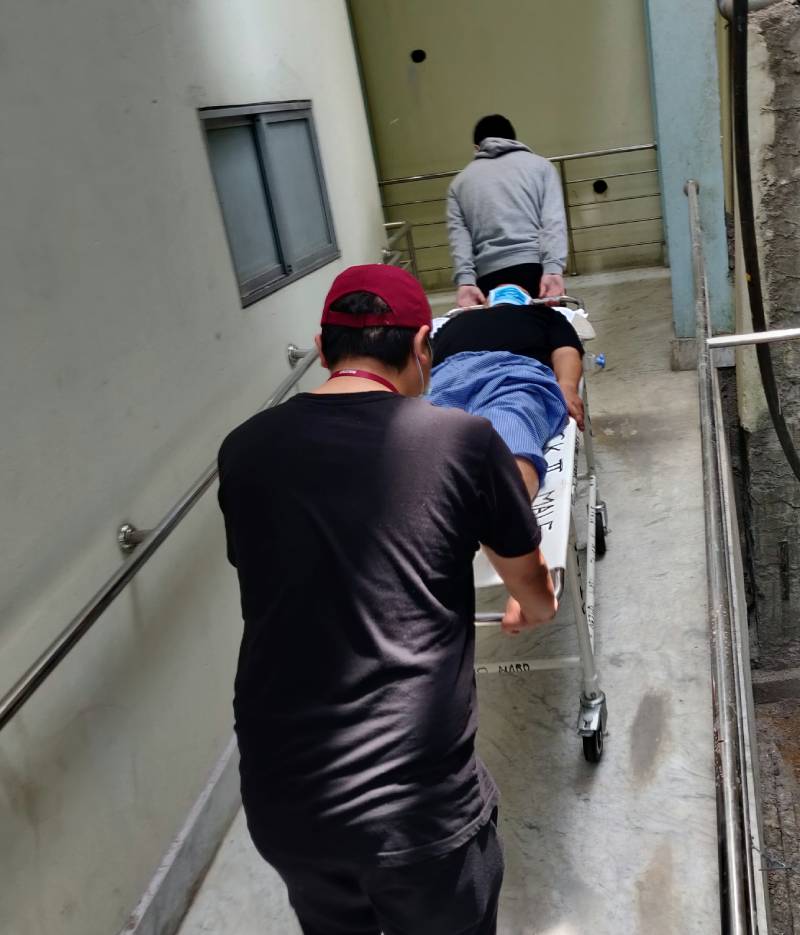 Dr. Love told the patient he could soon be discharged :P 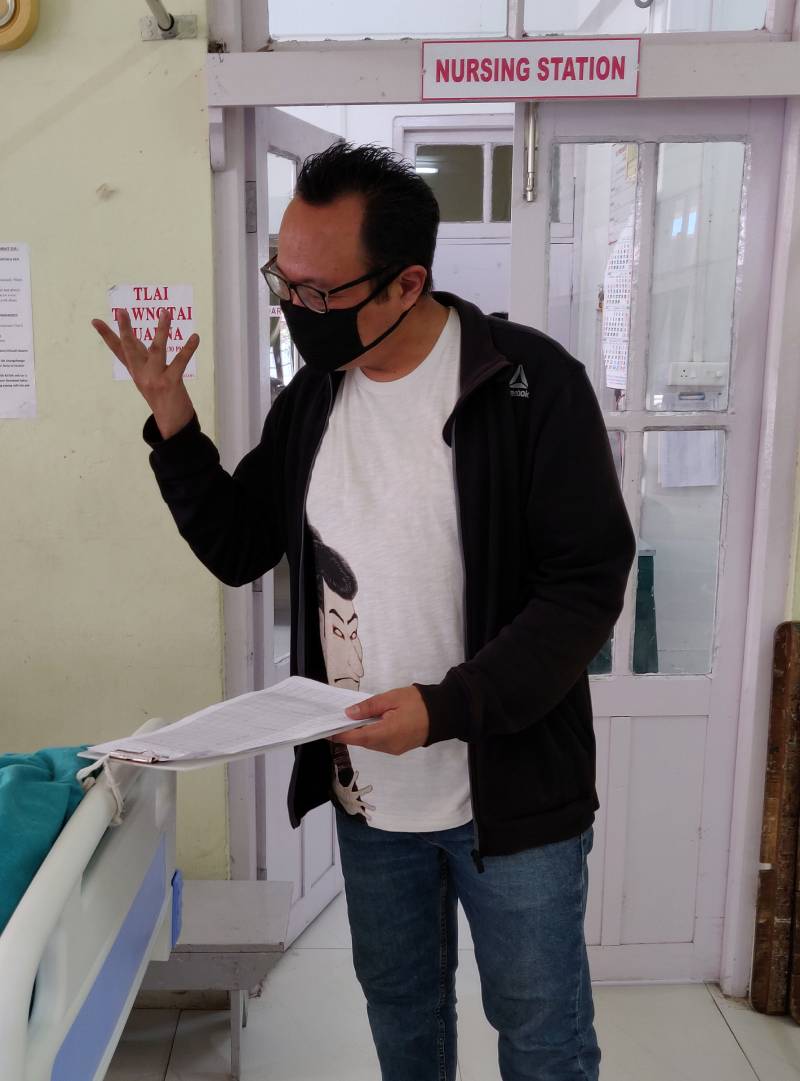 Jokes aside, my cousin's X-ray result was "very good" according to the radiologist. 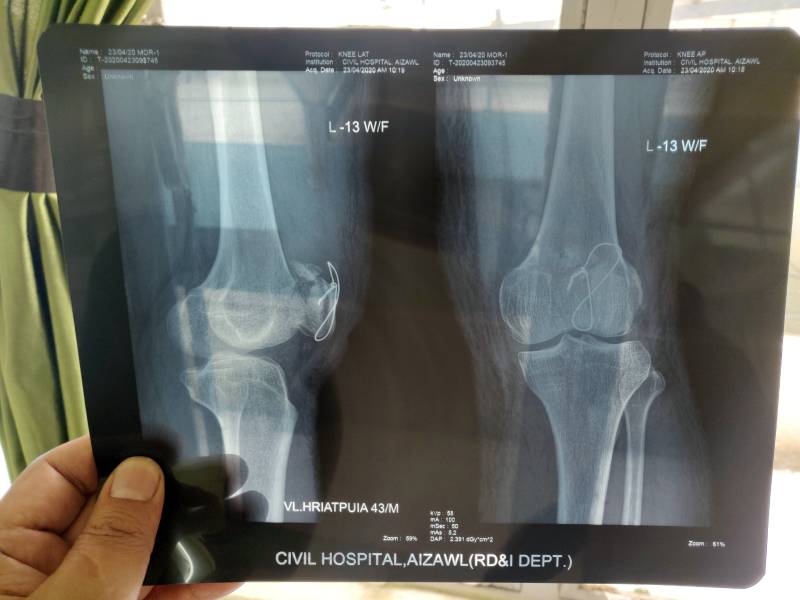 To celebrate, my cousin had to pee, and so my two nephews hid him from public view while he did the needful into a pan :D 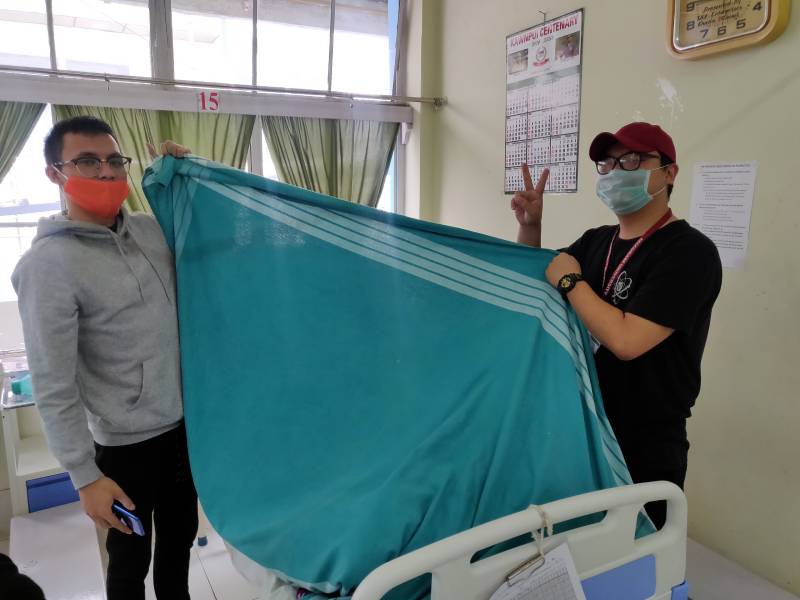 Again we were told to go home after that. After we reached home, we received the good news that he was to be discharged, as the hospital wanted to keep those admitted at a minimum.

Since we had just reached home, other cousins like Sangliana and neighbours Tetea and JK-a helped with the transportation, while the rest of us waited at our colony for their arrival. 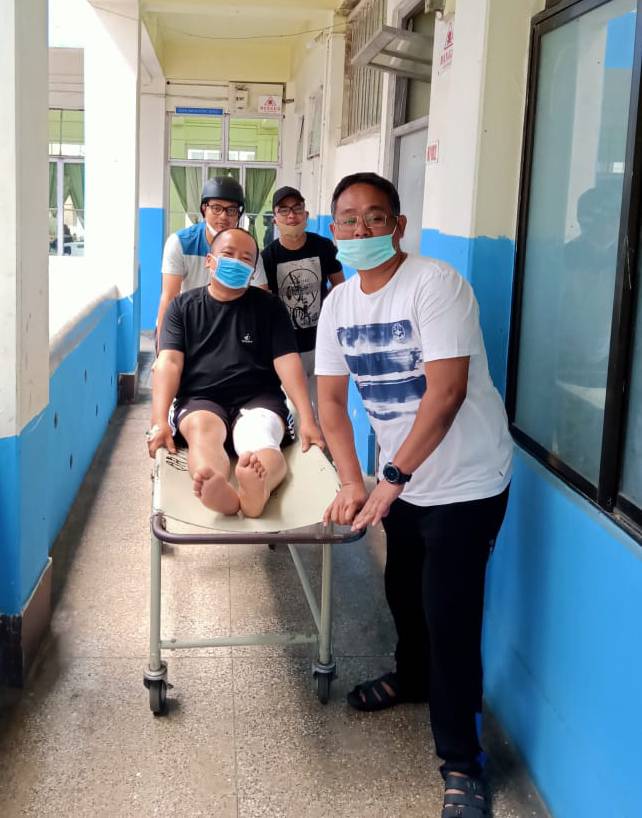 Once they arrived back home, we carried him on a stretcher and laid him on his bed. 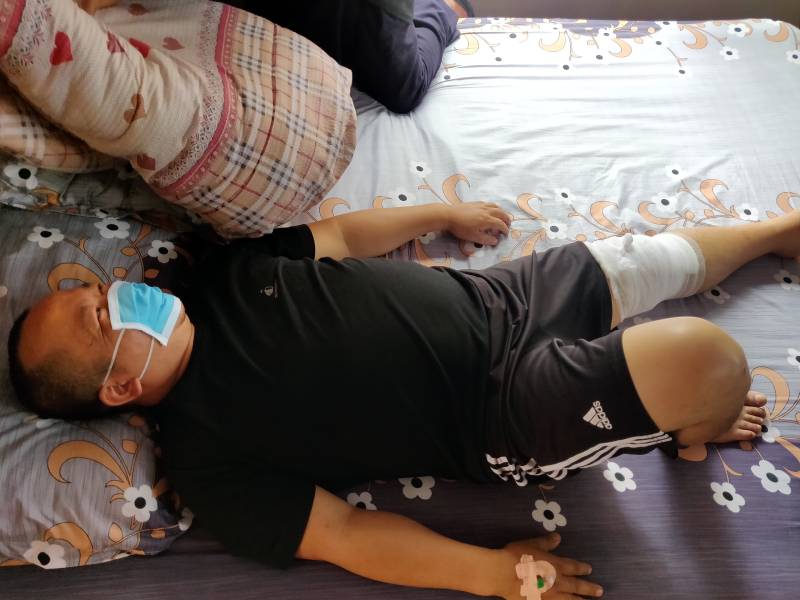 And so, that is what's been going on with me for the past 4 days. We are all so thankful that the injury is not very serious, and right now it's all about recovery for my cousin.

It was also a very different feeling to see the hospital with such a small crowd compared to before, and deep inside, I still find it hard to believe that all this is real, that it is not some nightmare you and I will suddenly wake up from.

And while people who do not have very serious ailments are advised not to go to the hospital, do remember that there is the entire medical staff from doctors and nurses, receptionists, ward boys, lab technicians, canteen in-charge, medical store keepers, security guards etc., at Civil Hospital Aizawl who MUST report to work every day.

Let's continue to keep them in our prayers. Take care for now everyone.