I've had my fair share of encounters with different species of snakes, from the tiny garden variety of non-venomous snakes to the extremely venomous politicians who create communal or racial discord for the sake of gaining votes.
But I really wasn't prepared at all when I came face to face with a 6 feet long cobra last week! 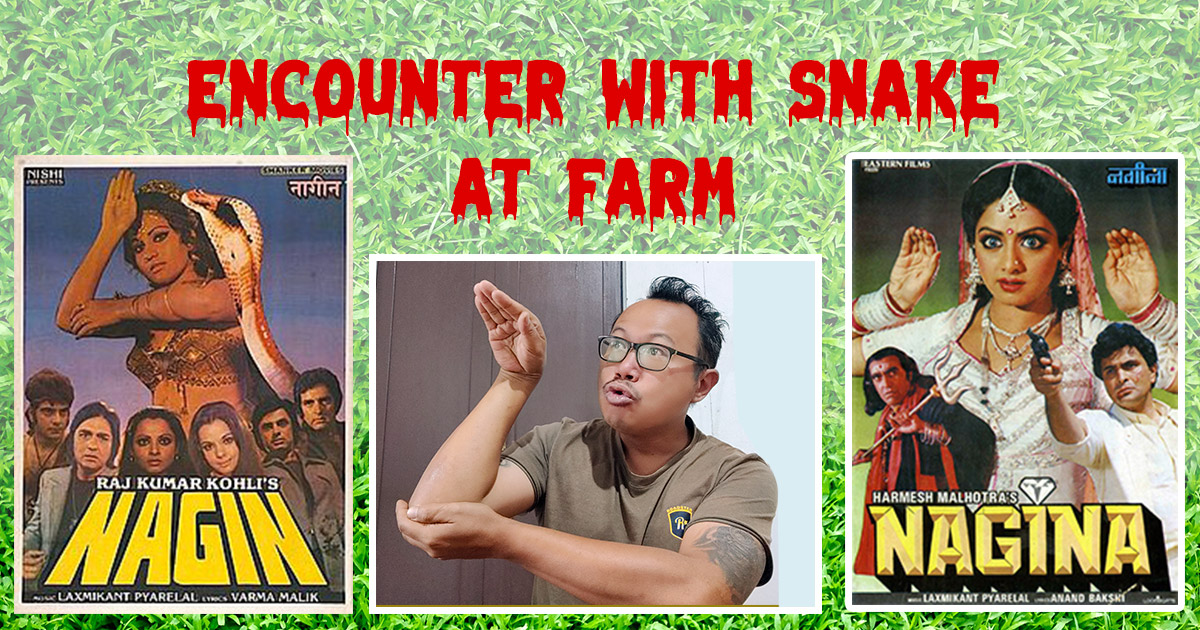 I've been staying at our farm for more than a year now. And for the past 1 month, I've had the delightful companionship of our adorable dog Dobby. Some of you may have read his guest articles on my blog - "Goodbye Dehradun" and "Hello Mizoram".
I won't write much about Dobby's experience here at our farm as he wants to write those posts himself, so do visit again to read his upcoming updates. 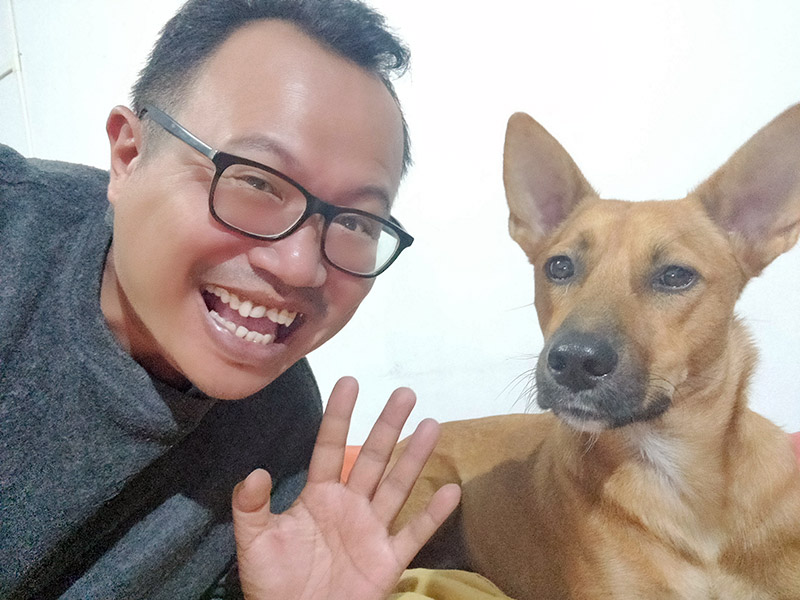 Everything became merrier and happier at our farm with Dobby by my side, except last week when we encountered a cobra! I almost got a heart attack, not because I'm fearful of snakes but because I feared for Dobby's life as the cobra was in full attack mode, ready to strike him!
So here's what happened.
Dobby and I wake up every day at 5:30 AM. That's farm life for you. I let him out of the farmhouse after that so he can pee and poop and do any other business required, while I start getting ready for the day. I make my bed, freshen up, make coffee, cook breakfast, wash the dishes, sweep the farmhouse etc etc.
He eats breakfast at around 8, and once he's full, he usually lies down on the lawn in front of our farmhouse basking in the warm sunlight, while I prepare to eat my breakfast. 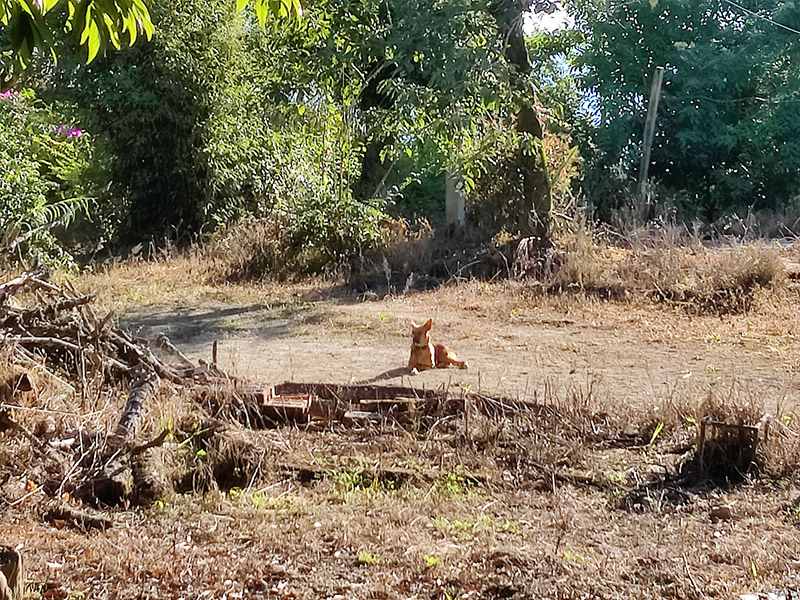 That fateful day, while I was eating my breakfast, I heard Dobby bark from the lawn. He barks at anybody entering our farm, like bawngchawphur (cowherds looking for fodder) or farmers from neighbouring farms who use our farm as a shortcut to go to their farm.
But this time, his bark was unusually longer and more aggressive. I started having a bad feeling about it so I went to the window to look at him. He was actually barking in the opposite direction, towards our barn! 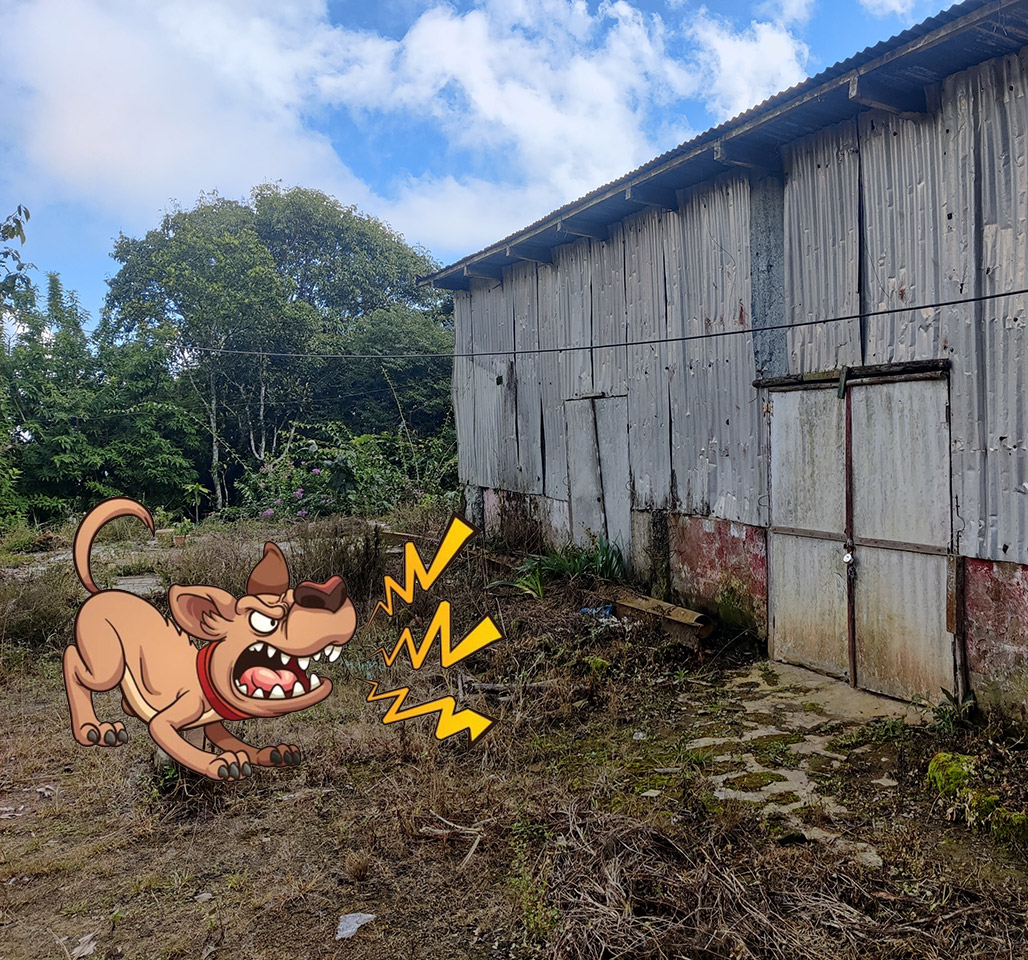 I was like, "What the hell?" and ran outside immediately.
None of those bawngchawphur or neighbouring farmers come near our barn so I was thinking it could be drug addicts looking for items to steal, or probably some wild boar who ventured too far away from the forest area.
As Dobby saw me run out from our farmhouse, he ran towards the back of our barn and continued barking. It was only when I reached there that I was completely shocked. He was barking at this big ass cobra!!! 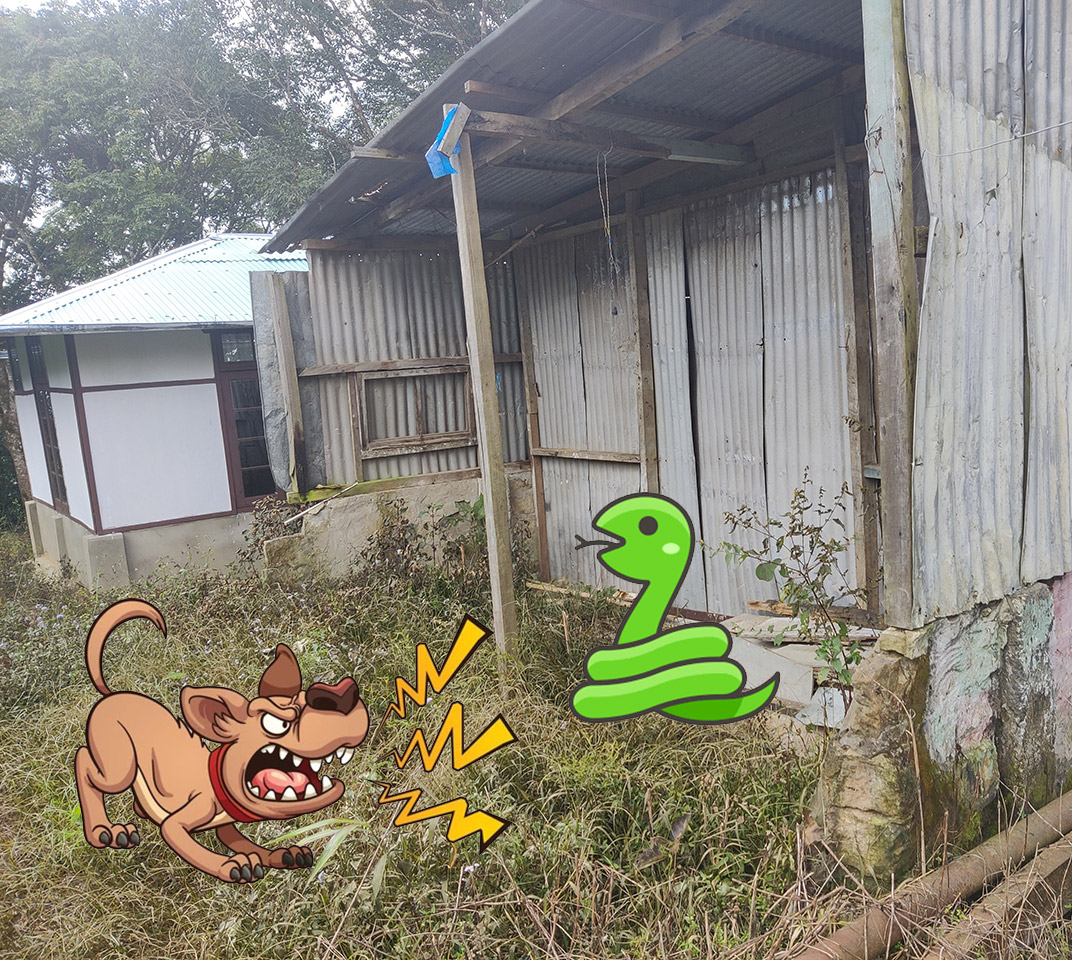 In all my time of living at the farm the past one year (or the many times I used to visit the past 20 years), I had never seen a cobra. I've seen those small scrawny snakes many times and they didn't bother me as they just slithered away. But a freaking cobra? Hells no! I never for once thought there could even be a cobra at our farm.
I grabbed Dobby by his collar immediately and pulled him back inside our farmhouse and locked the gate. 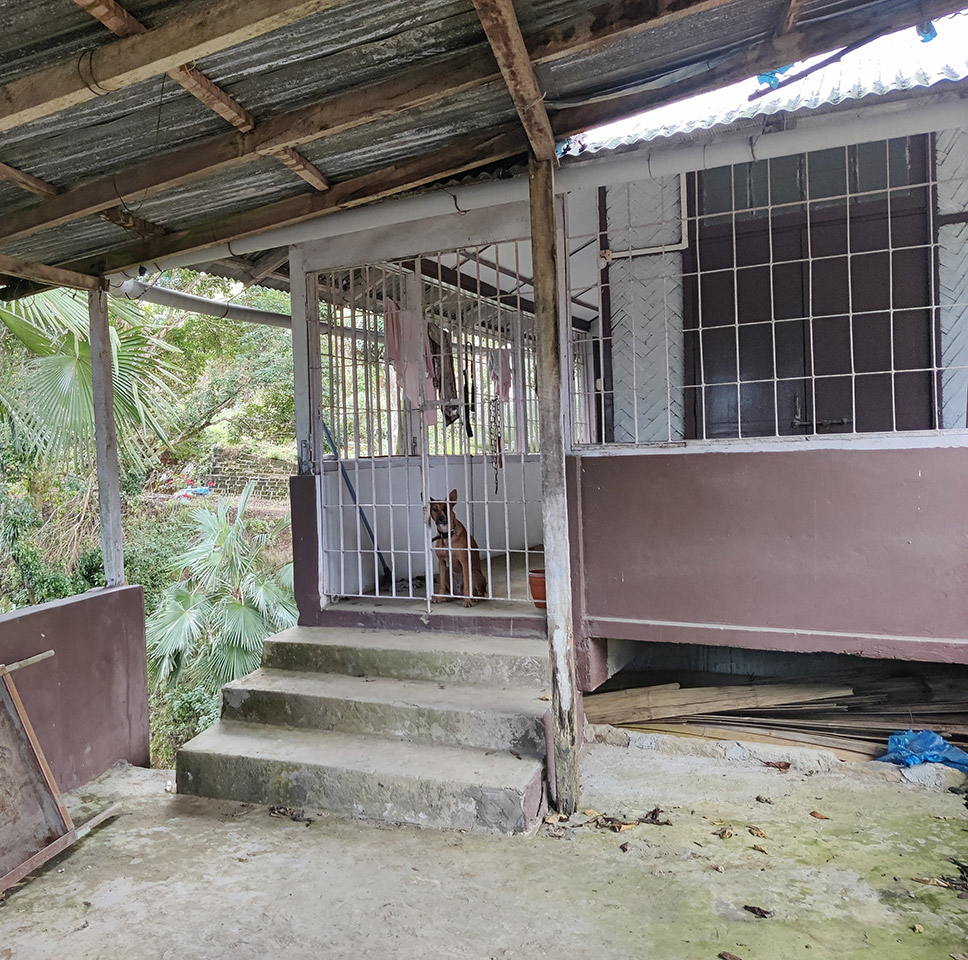 Once inside the safe enclosure of our farmhouse, I called up Pi Thuami immediately. She's one of our neighbouring farmers. Luckily for me, she was already working at her farm and she said she's sending Pu Huma down right away. 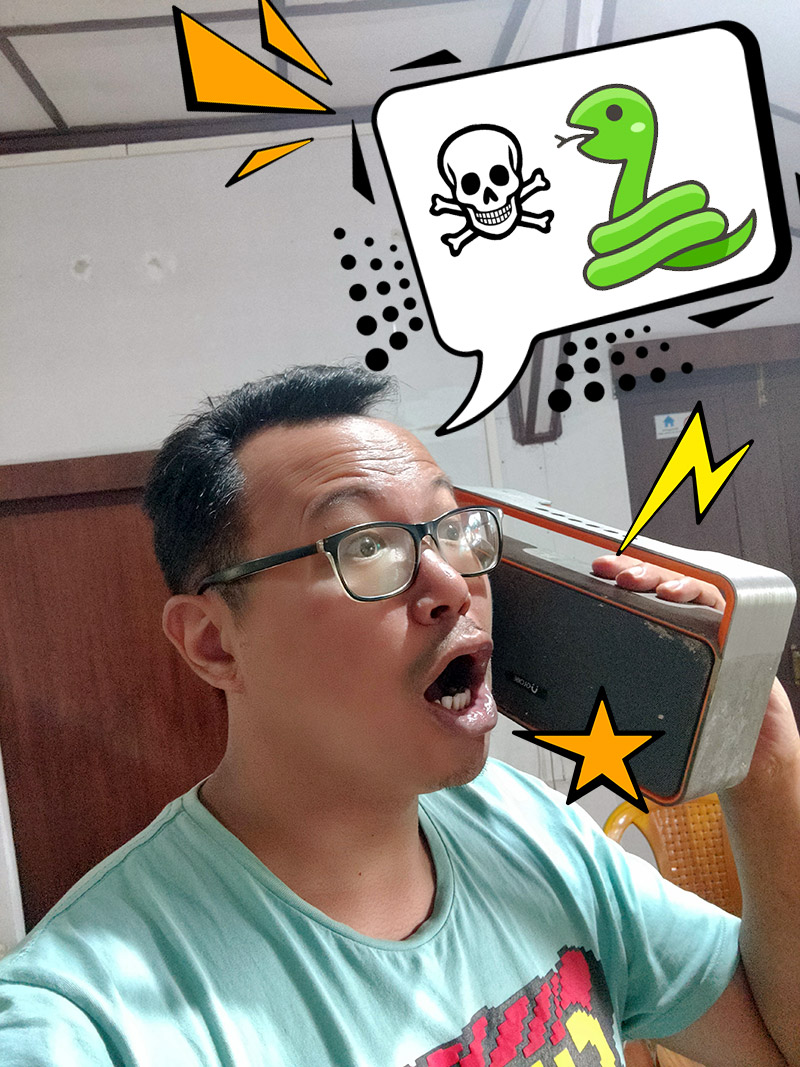 As all our farms are connected with little or no boundary walls, a cobra in our farm is as dangerous to me as it is to them too.
When I saw Pu Huma running towards our farmhouse with a stick, I opened the gate again as I wanted to take him to the back of our barn where we spotted the cobra.
But bloody hell, the moment I ran outside the gate, the freaking cobra was right next to me IN FRONT of our farmhouse. It must have slithered all the way around our barn towards our farmhouse while I was speaking to Pi Thuami on the phone.
I completely didn't see it. It would have definitely bitten me had it not been for Dobby's warning! I jumped away just in time and Dobby threw himself between the cobra and me as I regained my composure.
I panicked and hurled whatever I could find around me towards the cobra - empty water bottles, twigs, YMA cups and even a tualhmunphiah (Mizo version of a besom broom). None of them hit the snake of course and it only made it more aggressive.
It was already standing as tall as me, head completely spread flat and hissing loudly at the two of us, ready to strike. My biggest fear was that Dobby would lunge at the cobra so I was screaming at him the entire time not to attack.
I think the snake was distracted or confused with the mixture of Dobby's vicious bark and my shrill scream because it didn't notice Pu Huma who was running towards our farmhouse the entire time. As soon as he reached our spot, he whacked the snake right on its head with his long bamboo stick. 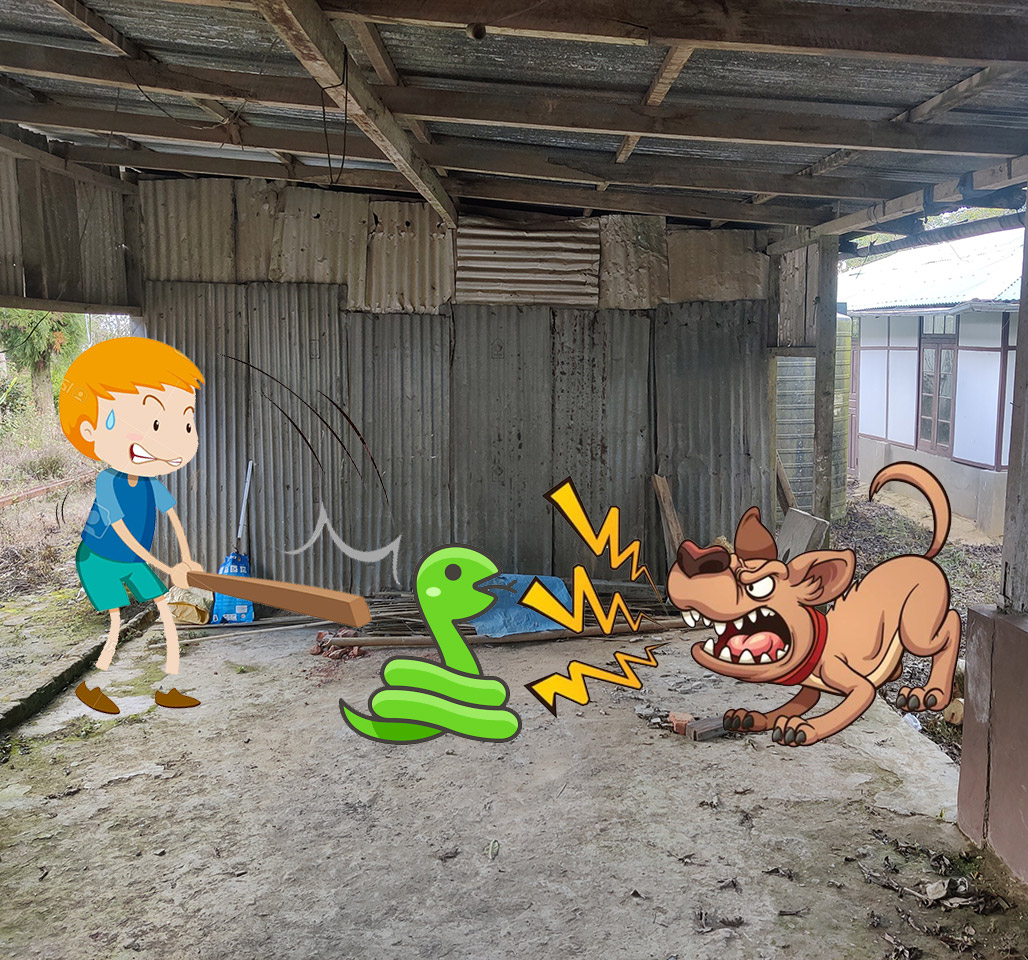 Whack, whack, whack.
I grabbed Dobby by his collar again and held him tight, while Pu Huma continued beating the snake. Finally, the snake was motionless and then Pu Huma took out his sharp chempui and chopped off its head.
Everything felt so unreal. My heart was beating faster than Pu Himanta Biswa making up yet another lie on why Mizoram retaliated against Assam.
Pu Huma then took the dead snake (and detached head) with him to discard at a nearby cliff. 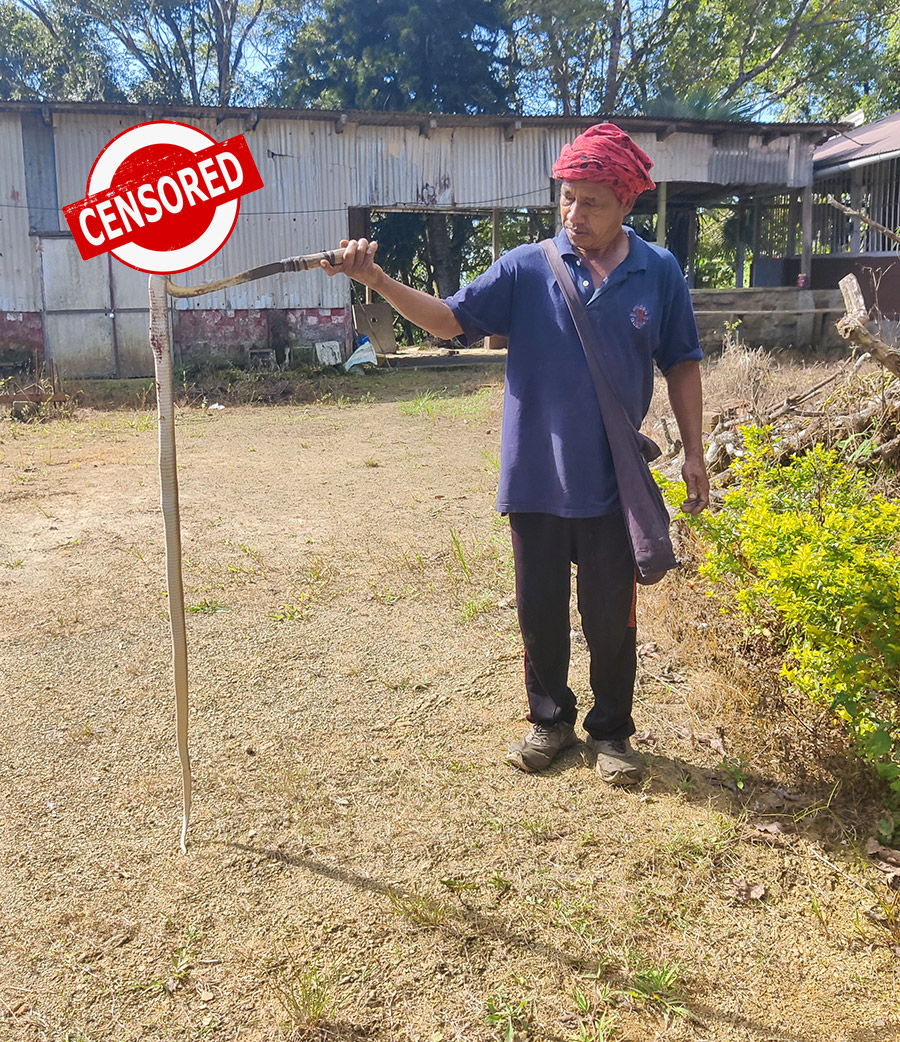 Man, that was such a harrowing experience for me. More than my life and well-being, I was worried about Dobby's. The little idiot had never encountered a venomous snake before. One bite from the cobra and that would be it for him. :(
Had he just barked at the cobra from a safe distance, I would be okay with that, but watching him just inches away from the cobra ready to pounce, man, my heart stopped beating right then!
Dogs very rarely survive a fight with a venomous snake. That's a fact. Yes, they end up killing the snake eventually, but because of the snakebites inflicted on them during the fight, they too eventually start frothing in the mouth and die too.
With no anti-venom with me or clinics nearby (the nearest is Vety college at Selesih), that would have been Dobby's last day in Neihbawih. I thanked God profusely for keeping Dobby safe.
I was still shaken up after Pu Huma left. I called up another farm neighbour Pi Zuii and hired her for a half-day chore. I spent the rest of the day locking up Dobby inside the farmhouse while Pi Zuii and I sprayed FIRE (Paraquat Dichloride 24% SL) herbicide all around our farmhouse, barn and yard.
The logic was that the herbicide won't kill snakes but it will kill all the grasses and plants, thus making snakes more visible next time. Pi Zuii and I also cleared all the garbage around our farmhouse because they attract rats, which in turn attract snakes.
Lalani also told me to make a compost pit for leftover waste disposal far away from the farmhouse as that would also pull away the rats from our farmhouse, ergo, the snakes too.

But I still can't fathom why that cobra came towards us. Even Pi Zuii and Pi Thuami were surprised. According to their vast experiences with snakes in Neihbawih, they said the snake always slithers away from humans as it is their survival instinct. So why did this particular cobra behave unnaturally? That was so scary.
Trust me, I really didn't want to kill the snake. I only wanted Pu Huma to help me scare the snake away, but unfortunately, it resulted in the loss of its life. Apart from the needless violence, we could end up disrupting the ecology too. The increase in the rat population in Mizoram is already attributed to the demise of the snake population.
Likewise, Lalani told me that currently in Mizoram, the population of cobras has increased exponentially because people killed a lot of King cobras, the main predator of cobras. Could that be the reason why we just saw a cobra so brazenly approach human settlement in broad daylight?
All our actions have consequences, especially when it comes to the balance of nature.
As of now, I'm extremely careful whenever I venture out from our farmhouse. I always carry this long bamboo stick with me now and I look everywhere first before taking any step, lolz.
When I trekked downhill to buy my weekly supplies from Pi Biki's shop (the nearest shop from our secluded farm), I narrated the incident to her and the number of times I must have cleared our thick overgrown terraces cutting weed and tilling the soil without being aware of a cobra nearby, and how I don't think I can do those ever again.
She laughed and said, "Snakes are so funny, right? When it is alive, we aren't scared of it because we're unaware, but once it is dead, we are so scared of it".
True indeed! :D
Posted by Mizohican at Tuesday, November 16, 2021