Wanna spend a freezing Delhi morning jostling with thousands of other people in a cramped and tiny place with lowlifes all around you attempting to steal your wallet or mobile phone while grabbing your ass or breast if you happen to be a woman?

Ok that did not come out right. Lemme try it again.

Wanna spend a cozy Delhi morning shopping at a large open area where you can buy some of the best goodies available in the market at a really discounted price which your friends will definitely envy you for?

Ah that sounds much better

That’s what we did this Sunday. We went to the infamous “Sunday Market”, also known by its street name as “Chor Bazaar” [Thieves’ market]. Trust me, people did not call that place “Chor Bazaar” for nothing; the place earned it. Not only will you find a lot of stolen goods at that place, you will even find your own stolen goods over there.

There’s the story about the guy whose watch was stolen the moment he stepped inside “Chor Bazaar”. As he walked a few more steps ahead, he found his watch already displayed at the showcase of one of the shops, completely polished and shining like new

. And then there’s the legend about the guy whose mobile handset was stolen while he was ON the phone… he didn’t realize the theft for the next few minutes. Hah, exaggerating, am I? Yes, but at least you get bits and parts of the picture right?

If you look around carefully, there will be four main types of merchandise available at the Sunday market :
Below are two photographs taken by my girl. You can also find them at “Chengkawlbial : Sunday Market [Chor Bazar]” post. 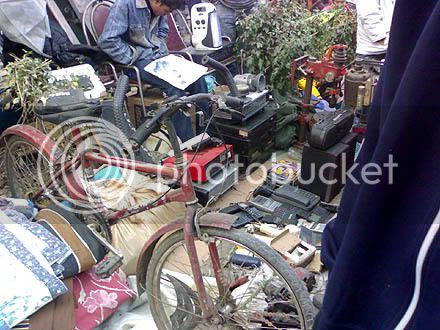 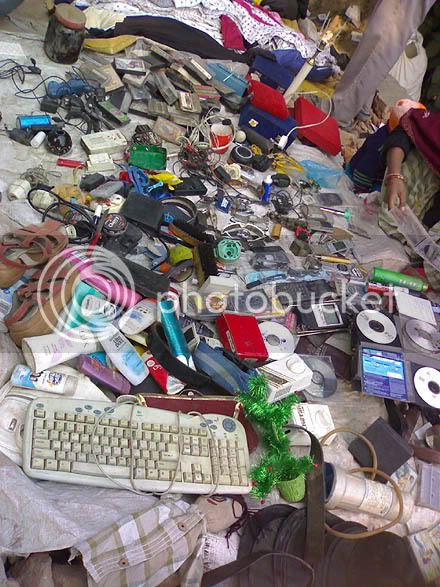 Amazing isn’t it? The above two photographs were taken at the “stolen goods” section. Have you guys ever played those “Mystery Games” type of games on your computer, where you have to find hidden objects in a room filled with different objects? See if you can find the following 10 objects:
Hint: 3
Time remaining: 5 minutes

That’s what I am reminded of after going through that section. Eventually we never bought anything from the “stolen goods” section, not because of any such moral values but rather because we didn’t find anything we like.

From the other sections, I bought this amazing multi-purpose tool box for just 100 bucks!

My girl was immediately like, “what’s with you guys and the NEED to have tool boxes?” And I looked at her nonchalantly and said, “Baby, you can make fun of me but never make fun of my tool”… ok that didn’t come out right again, what’s wrong with me today! I told her bluntly, “Baby, it’s a guy thing, you wouldn’t understand.” And I added that toolbox to my large collection of other hardwares like hammers, chisel, saw (mini), nails, wrenches and screwdrivers. I love my tools and yes, I cannot live without them. Period.

And then I bought this amazing converse shoes for … guess how much?

1000? 800? 500? Well, you can get the same set of shoes from Reebok or Nike for around 2000 bucks. I bought the above shoe for just 300 bucks! Hehehe! And no, it’s not a cheap knock-off. I am quite an expert with shoes and can easily distinguish the cheap fakes from the originals. It’s definitely not one of those Chinese knock-offs like Adadas “Supperstor” instead of an Adidas “superstar”

I bought a couple of other stuff that day which were all at a good bargain. After that session, we all decided to go to the famous “Chandni Chowk” for lunch. And then we got lost on the way (we ask people where is Chandni chowk, and they say THIS is chandni chowk, and we’re like, where’s the foodstalls?), so we finally ended up eating at… McDonalds! Lolz. I know, we are so pathetic!

After lunch, we moved on to the other part of “Chor Bazaar” – The book section. You get tons and tons of books, any books, at a really really discounted price.

I saw one very sick sight. As we pushed and shoved our way down the narrow lane selling all those books, I saw one dude grabbing the ass of a muslim woman clad in a burkha. The poor woman reacted sharply from her eye expression, but the guy just moved on along with the crowd, grinning like the true asshole that he was. Fucker. And there was nothing that I could do, trapped in that huge sea of body masses rubbing against each other. Some people are so fucking sick, I just go mad thinking about it. Bastard.

I bought a couple of WW-II documentary books (“Dunkirk: The Patriotic Myth”, “Poland’s Agony” and “Hitler: The making of a Dictator”), for 20 bucks a piece! All hardbound and in excellent condition! Hehehe. It’s going to be a good week ahead.

Hoping to hit this market in the near future again, but the next time we go, we’re definitely going to make sure we eat at the Chandni chowk foodstalls.

Posted by Mizohican at Wednesday, December 12, 2007

I heard a story about a guy who sold a 'bada calculator' for a few hundred bucks, which turned out to be a snazzy laptop. And what about that one guy who bought the right pair of a fancy pair of sneakers after the seller promised him that he'd 'get' him the next left pair the next week. :-)

I miss Chandni Chowk - as crazy and suffocating the place can be, especially during summer...the oily, cholesterol packed food...

I love this kind of markets, where you can get cheap good stuff and nobody cares who you are and where you come from. Kinda reminds of Charminar, where according to a friend "You can find everything except God."

Hehehe.. That's some collection of stolen goods. Would anyone actually buy the Lux shower gel??

next time you find a "bada calculator", get me one...:D

Glad that you found something from the market :)

@ aduhi: Ah. Charminar. Been there too. Try going to that place with Arab frens and you will find out how much black money is available for "exchange" :) You can even get fake graduation certificates of any college you wish at that place too! lolz, even Harvard or Cambridge!

@ matey: Dunno... I didn't even ask how much, coz it was more or less empty. I was laughing away uncontrollably so I couldn't ask ! :)

@3d: hehehe... Thats what I was looking for that day too. A "bada calculator" :) But unfortunately couldn't find one.

@ Janice: hehe... I found more than enough things on that market :) Long time no see Janice.

LOL!!!
I really don't like crowded places... But, I've heard plenty of stories about Chandni Chowk...

Been there done that.. :D

and I got a high fever after their discounts when i was home.

Illusionaire, a man who loves to shop in flea markets is a man after most ladies' hearts ;D

If you're hankering for really good food, go to Karim's. The chefs are descendants of cooks of the Muslim kings. It's near Jama Masjid, all rickshaw drivers worth their salt know the shop. Try the chicken burra; is awesome!

All those shoes are stolen, mind u :D
There was a joke that used to float amongst NE students in DU.
"Oh, if you lose your the first place to check it is sunday bazaar"
Tch tch brother, I hope you didn't buy gifts for you dear ones from that place. Its called 'chor' bazaar for nothing :D :D
As kids, we used to buy our football/cricket kits from that place, but a bomb blast during one of our visits sure made us think twice about going to that place.

Gak! don't approve my previous comment (and this one), too many typos :P

all I can say is you guys have lots n lots of energy..whew...

btw, how much is the bicycle?..need to buy one, :P

Haha. I wish someone was selling a orginial Gucci Bag at your second hand/ chor baazar! I bought a fake Prada bag at this Chinese(where else?) market in NYC. Apart from the fact that it was only 30 $ and it looked superbly orginal,it was the best buy ever! I felt a little sad when I realized I didnt have the money to buy an original designer and had to make with a fake one. But I soon got over it when my friends back in Columbus went like -" WOW! Prada! you must have some money!" hehehe


So Kima, would you put in my request in the request box about stealing original designer stuff? :p

And tool box? I totally understand! I only wish I received a penny every time a guy asked me -" whats with women and shoes/bags?"

@ Pixie: You gotta experience it at first hand to have the real feel about it. Man, you're in for a reallll surprise :) Even I've heard about it before, but nothing can do justice to those hearsays one you experience it :)

@ diary: Thanx, will definitely try that out the next time we go. And yeah, thats the old Mizo saying, that a Man who loves flea market is loved by all the ladies. Lolz. How true! :)

Hehe, I'm so happy for you about your dupe Prada. But I hope you made sure it is a "Prada" and not "Grada" or "Prade" *WIDE GRIN* That kinda stuff really does happen if you don't check carefully :)

@ Jimmy: lolz, sorry brother, I read your comment only after publishing it, sorry :) Psst, the shoes I bought aint stolen :-P Dont try to take the "feeling" away from me, you rascal :-P

@ Almost: The bicycle comes free upon purchase of the candle-stand and (used) mosquito repellent. lolz. Yeah, you know where all my energy is coming from right? :-P

i should've definetly have to go there one day to get that keyboard..

"lolz, sorry brother, I read your comment only after publishing it, sorry..."
so you publish your comments first and then moderate them? Balls!

Gerry Armstrong was the commentator..

Ramos from Madrid gets substituted for Arjen Robben and Gerry armstrong goes.. now Ramos is off and in his place comes Van Persie .. hilarious..
and then he didnt even realise he makes the mistake

@ luke: It is indeed a grand market :) Lemme know when ur in town and I wouldn't mind giving you company. lolz.

No doubt, chor bazaar is one of those amazing places in Delhi that is definitely worth a visit but is not everyone’s cup of tea. Click here to know more about Chor Bazaar.