As I mentioned in my earlier post, sometimes it’s nice to update one’s blog with a record of what’s currently happening, no matter how frivolous that post may be, so that years from now I can read it again with glee. This time, I’m just making a quick update about the 2014 World Cup Round of 16 fixtures.

I’ve been supporting Netherlands for the past three World Cups, as is evident from my blog post updates in 2006 and 2010. Back then, I had very few Indian friends who supported the Oranje, because they were unknown to most people who don’t follow football. I on the other hand had been a supporter of Netherlands because of Arsenal legends like Dennis Bergkamp and Marc Overmars, and other legends such as Ruud Gullit, Patrick Kluivert and Van Basten. And of course because many of them were named “Vans”, just like me, Van lalruatkima :)

Everybody would mock me in office for supporting such an “underdog” team as they rooted for the typical clichéd Brazil, Argentina or Spanish teams. I’m not saying there’s anything wrong in supporting those teams. If you like the players, you sure can support any team you want. But if you don’t know anything about football or you’re hardly interested in the game, then for the love of God just because you have a herd mentality, do not mock others who actually do follow football.

And then suddenly at the last World Cup, Netherlands made it till the finals, making all my colleagues and bosses (Yes, Meg, Tarana, I’m looking at you) eat their words.

And all of a sudden this year, I see Netherlands fans everywhere :D You know, people claiming they had been hardcore Netherlands fans at every World Cup, including one guy (much younger than me) who claimed to have never missed watching a LIVE telecast of the World Cup whenever Dutch legend Johan Cruyff played! Hahaaaa! I wasn’t even freaking born when Cruyff played his last World Cup match!

Anyhoo, like I said in my earlier post, this World Cup I’m actually not supporting for Netherlands for a change, all because of RVP. Being a hardcore Gooner, it’s really difficult to actually support the team he’s playing for… But I’m very curious and interested to know where all these so called new Netherlands fans who popped out of nowhere will be cheering for next World Cup if Netherlands doesn’t win the title or even gets knocked-out in their first match (that’s what I love about blogging, you know, it keeps a record that we can read years later) :)

This World Cup’s upcoming round of 16 is like this – 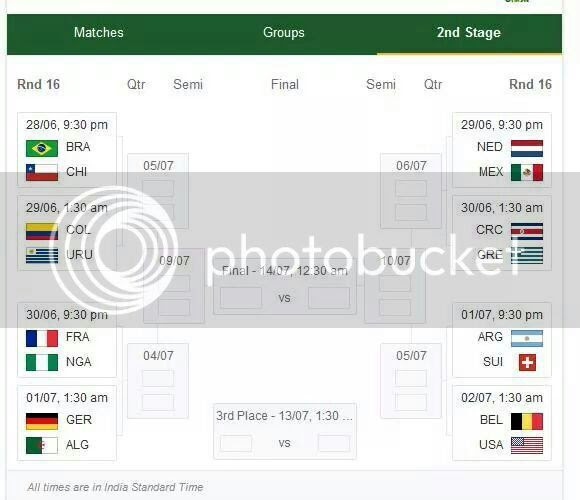 One quick look and most people will predict that the teams that will make it to the semi-finals are Brazil, Germany, Netherlands and Argentina.

But then again, that is just the vox populi. Anything can happen. I just hope the team I’m rooting for this World Cup - Germany (consisting of Arsenal dynamic trio Ozil, Podolski and Mertesacker) gets to lift the cup.

Until then, I will be cheering for whichever team Brazil, Netherlands and Argentina are playing against, starting with tomorrow - Brazil versus Chile. Comonnnnn Chile!!!!! :)

[Ps. Speaking of Chile, some of you may know that the company we started “FITH Media” was selected for the world renowned Start-Up incubator/accelerator program called “Start-Up Chile” last year from a total of 1577 applicants across 68 countries. It was truly an honor for us. And then in spite of all the nightmare I went through just to get my passport and Chilean Visa approved, we decided in the last minute that it was best for our company’s future if we remained in India and say goodbye to our Chilean dreams. My Chile Visa, as of today, is still valid till August 2014 actually! :) Our plan back then was to somehow sneak into Brazil once our incubator program at Chile was over and watch some of the World Cup matches at the venues. Too bad that’s not going to happen today. But still, to fix broken promises, I will be cheering for Chile more aggressively just because of that!]