Recently I wrote a blog post on reaching the milestone of owning 500 games on Steam and attaining Steam Level 50. I also wrote another post about accomplishing 10 Perfect Games (unlocking all achievements of that game).

A lot of my friends have been asking me why I haven't blogged about any serious topics in a really long time. In fact this year, I don’t think I have covered any serious topics like racism or culture on my blog. The thing is, writing about serious stuff requires time, in terms of research and cross checking facts. And I didn't have the time for that.

And I think I know who the culprit is for that.

My current 600 games + 30 Perfect Games + Steam user level 50 is not a very rare feat, there are many other Steam users with bigger stats than that. But the thing is, most of those people have been on Steam for 5-10 years now. I on the other hand, have been on Steam for just a year! Yup that's right. This coming December 31st, I'll finally start my second year on Steam!

Which really intrigued me - If I had achieved all the above stats in just one year, then just how bloody much time have I been spending on gaming this year?

I went to steamtime.info to get my answer.

The result shocked me! 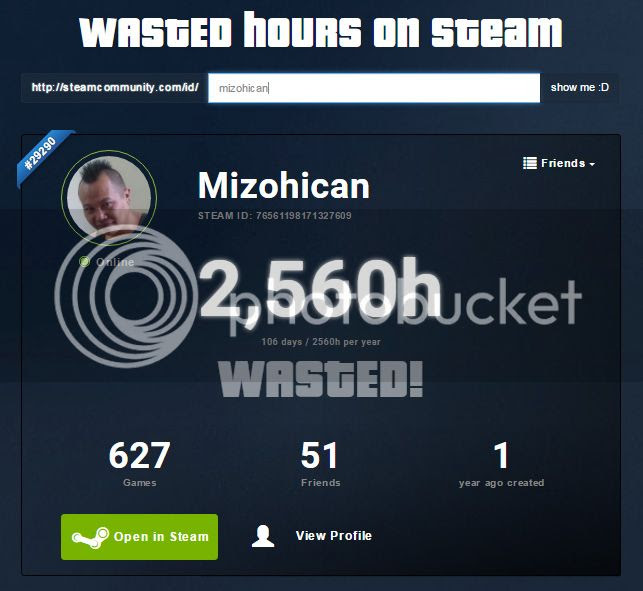 I sleep around 8 hours a day (I consider sleep a waste of time but more on that in another post), so that makes it roughly 2781 hours, which totals up to around 113 days.

So out of the 341 days this year so far, I have spent 106 days on gaming, 113 days on sleeping, and the remaining 122 days were spent on eating, working, travelling, watching football and TV shows etc. Man that is astonishing, and a little bit terrifying! No wonder I haven't been blogging much this entire year!

I think one of the biggest factor as to why I was able to spend so much time on gaming this year is because I'm in a long distance relationship. That means I don't need to go out for useless window shopping and stuff, or waste time exploring new romantic places together :) :P I just stay at home playing games the entire day when I’m not at work, and that also makes the missus happy because she knows I’m not out with other people. A win-win situation :D

But all jokes aside, this is a serious wake-up call for me. I don't even need to introspect; the numbers say it all - 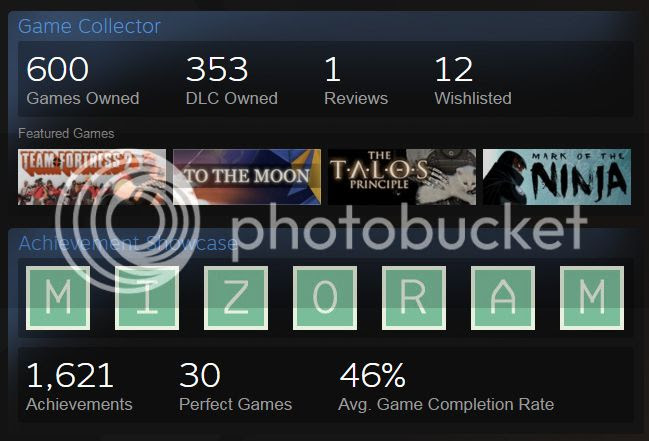 1600+ total achievements across 600 games with an average game completion rate of 46%. I'm going to make this my New Year's resolution - Spend less time gaming, and focus on all the other things I used to do before, like blogging, family, sports, outdoor activities etc.

I mean, being a couch potato and spending so many hours on gaming this entire year had taken a toll on me too. Every Thursday, my colleagues here would hire a futsal ground for a match (1200 bucks an hour) and when I took part in it, I realized I couldn't even run for more than 10 minutes! I mean, what the hell, I could rocket jump in TF2 and overtake any of my office colleagues or slash any monster with my level 150 Paladin, but there I was, out of breath in the real life.

But unfortunately that is where we live. Sometimes I wish I could just spend the entire day at my Neihbawih farm in Stardew Valley and focus on harvesting my cabbages and cauliflowers or exhaust my entire energy on fishing or mining. But sadly, that’s not possible.

As the title of this post says – "What time is it? Game Time!". This was the slogan we used to shout as a team before all our basketball matches, you know, those days when we were heavily influenced by NBA. It intimidated the opponents and pumped us up with adrenalin. Those were the days I was so fit and energetic, triple faking in air or hitting a fade-away from downtown. And that’s what I want to start doing again. Make the "Game Time" about real physical games again and not just PC gaming.

Posted by Mizohican at Wednesday, December 07, 2016