Last month, my OnePlus 6 phone suddenly stopped charging. No matter how many different OnePlus chargers I used, my phone absolutely refused to charge. Even with the phone kept on airplane mode and a charger continuously connected to it, the battery kept draining and draining...
20%... 10%... 5%... 3%.. 1%... Finally, dead.
And so that was it. The end of my 3 years old beloved OnePlus 6 phone.
I've been a OnePlus fan since its launch in 2014. I know I've mentioned this on my blog before, but I'll say it once again - I'm one of the first persons in India to own a OnePlus phone. :D
When OnePlus One phone was first launched globally in April 2014 through exclusive online invitation link only, the phone wasn't available for purchase in India yet, even if you're one of the very lucky individuals to get an invitation code.
My dear friend and boss Sidharth, CEO of Dentsu Webchutney, through his vast contacts and financial reach, managed to find a seller at eBay, somebody from USA who had just purchased it and was re-selling it at almost double the price! Sid was really curious to know what the big fuss was about the "flagship killer" phone that everybody was talking about, and since he was the leader of an IT industry with lots of money, he purchased it from that person.
Now remember, that was way back in mid 2014. The top phones of that time were the iPhone 5S, Blackberry Passport, Moto X, Nokia Lumia, Samsung Galaxy S4, HTC One and Google Nexus 5. And so it was very intriguing to read about an unknown and "unbranded" company called OnePlus entering the market.
Sidharth transferred the money to that eBay seller (while joking in his usual style, "Bh*nchod better not be ripping me off") and the much anticipated phone reached India within a week.
We toyed around with the phone for 2 days and finally Sid said "Cool", and then went back to his iPhone and Blackberry :D. Knowing how crazy I am about Androids, he sold the phone to me for the current market price, ignoring the extra amount he had paid to that eBay seller. Such an amazing guy Sid is! Best CEO and flatmate ever!
And that, ladies and gentlemen, was how I became the proud owner of a OnePlus One phone when it wasn't available for purchase in India yet.
By December 2014, people in India with invitation codes could purchase the phone online, and by then I was already using it for a couple of months. By early 2015, anybody in India could purchase the OP1 from Amazon and OnePlus website.
I remember how much I loved the OP1. It was way ahead of its competitors (of that time) in terms of processor speed, display, storage, camera, etc etc., while at the same time being sold at a much cheaper price, hence truly earning the tag "Flagship killer".
All the other top phones of that era were filled with bloatwares we couldn't remove, designed with clunky UI and prone to random crashes, whereas the OP1 was super clean and extremely easy to root and customize the way we wanted.
Ahhh... those golden years.
As time went by, I eventually bought the OP3 as my next phone, followed by the OP6, and now I have the OP9R. Here's my OnePlus family as of today. :) 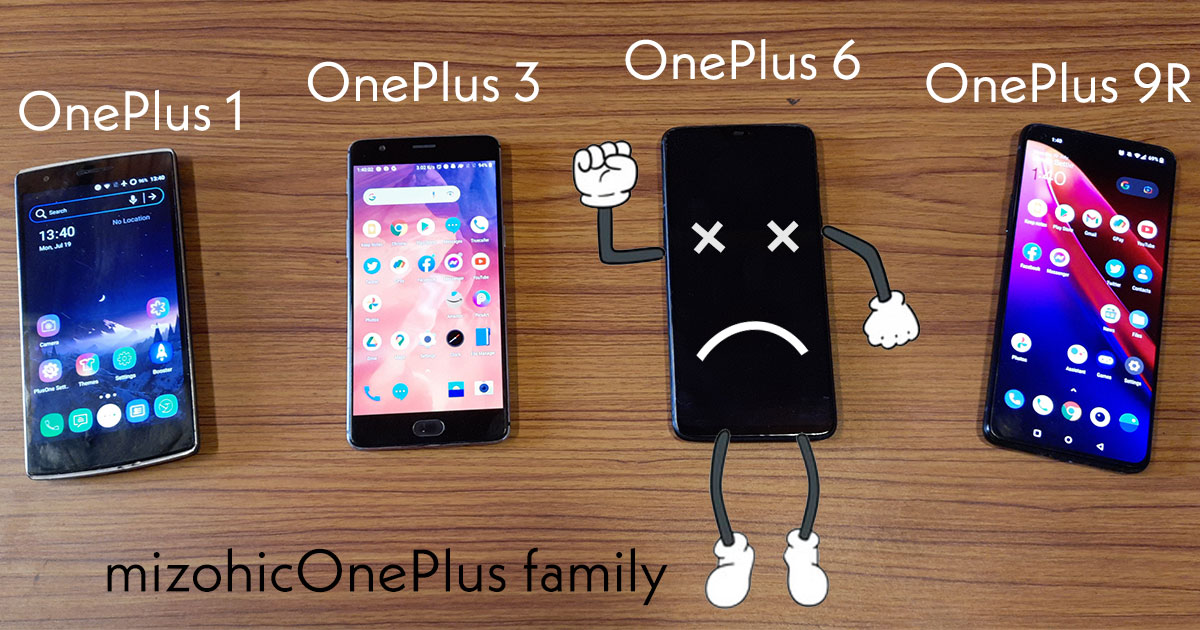 Am I still a OnePlus fanboy today?
Actually, not anymore. I mean, I was crazy about the OP1 of course. But all other new OnePlus phones after that slowly started losing their charm over the years. It was no longer inexpensive, and in fact it became a "flagship" phone, rather than the rebellious "flagship killer" phone it once was. It had joined the dark side.
There wasn't much of any ground-breaking innovative feature or advanced technology in their new productions. Many new "features" were more gimmicky than serving actual purposes. And the most disappointing part was that, every new model was just slightly better than the previous. That was it. An utter anti-climax.
Plus, there are now many phones in today's market that are as good as the OnePlus phones, if not better. Even OnePlus' sister companies like Oppo, Realme, Vivo and iQOO (all owned by the same phone manufacturer, in cases you don't know) are as good as the OnePlus phones.
And so, I decided not to purchase a OnePlus for my next phone. It was finally time to divorce and explore other brands.
The ONLY reason why I bought the OP 9R was because of the sudden demise of my OP6. I panicked. I didn't have proper time to research on which new brand to buy, especially since Amazon had JUST opened its delivery to Mizoram again.
For my privileged Indian brothers, let me inform you that ALL online e-com portals in India had discontinued their services to Mizoram for many months since the pandemic started. Every single item on Amazon was marked with a cautionary text in red - "This item cannot be shipped to your selected delivery location. Please choose a different delivery location."
Every. Item.
And then on 29th June, just after my OP6 had died, our state government finally allowed online deliveries again! What timing! I went to Amazon immediately and clicked on the first random item on my screen. The message "This item cannot be shipped to your..." was no longer there!!!
Yes, we were finally allowed to place an order! I bought the phone immediately. My payments too were confirmed. Having worked in the IT industry for many years, a part of me was praying that it was not some bug or an oversight, like some regional sales manager of Amazon got drunk and forgot to toggle off the switch for delivery to Mizoram, lolz.
The next few days were unbearable. Will my phone be delivered or not, was all I could think about. It felt too good to be true, you know. I mean, it was such a coincidence, what are the chances of online shopping being disabled for months after months and then suddenly being activated again just when my phone had died? :D
Finally, on 5th July, my OnePlus 9R was delivered! Yayyy.
And yes, talk about luck and timing. Mizoram is now currently on a lockdown again with all online deliveries prohibited, so if you visit Amazon website now and select any item, you will see the same "This item cannot be shipped to your selected delivery location. Please choose a different delivery location." message once again! Phewww! 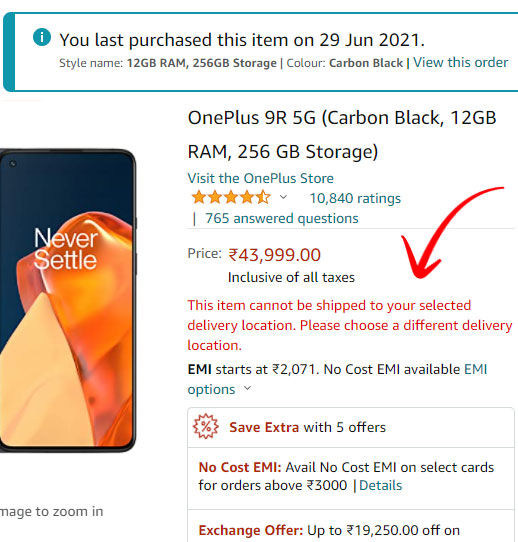 Yup, the same OnePlus 9R I had ordered just 2 weeks ago is no longer available for purchase today if Mizoram is the delivery location. I guess you can say, Lady Luck from Dehradun smiled on me. :D
Even though the OnePlus 9R isn't my ideal dream phone, I am happy with it so far. I really did like the specs of the new OnePlus 9 PRO, but no way am I going to spend freaking 70K on a phone, especially now that I am unemployed.
Hence, I'm content with my 9R. For the uninitiated, OP 9R is nothing but the OP 8T with a few firmware and hardware improvements (slightly upgraded processor and GPU but the same display, RAM, storage, battery, camera, dimension etc). Hence, an OP 8 or 8T user may not notice any difference.
However, for an OP6 user, it is a good upgrade. The features I like the most so far are the "wide angle" camera view option which my OP6 never had, and the on-screen fingerprint sensor. Initially, the rear fingerprint sensor of my OP6 was cool, until you realize you have to grab the phone or lift it every time to use it. I eventually disabled it because of that inconvenience. OP 9R's on-screen fingerprint scanner makes life so much easier.
So here's to the OnePlus 9R and hoping it will serve me many wonderful memories and take lots of wonderful photos for my future blog updates. :D
To end this post, here are a few photos of my OP 9R unboxing, taken with my spare OP3 phone. 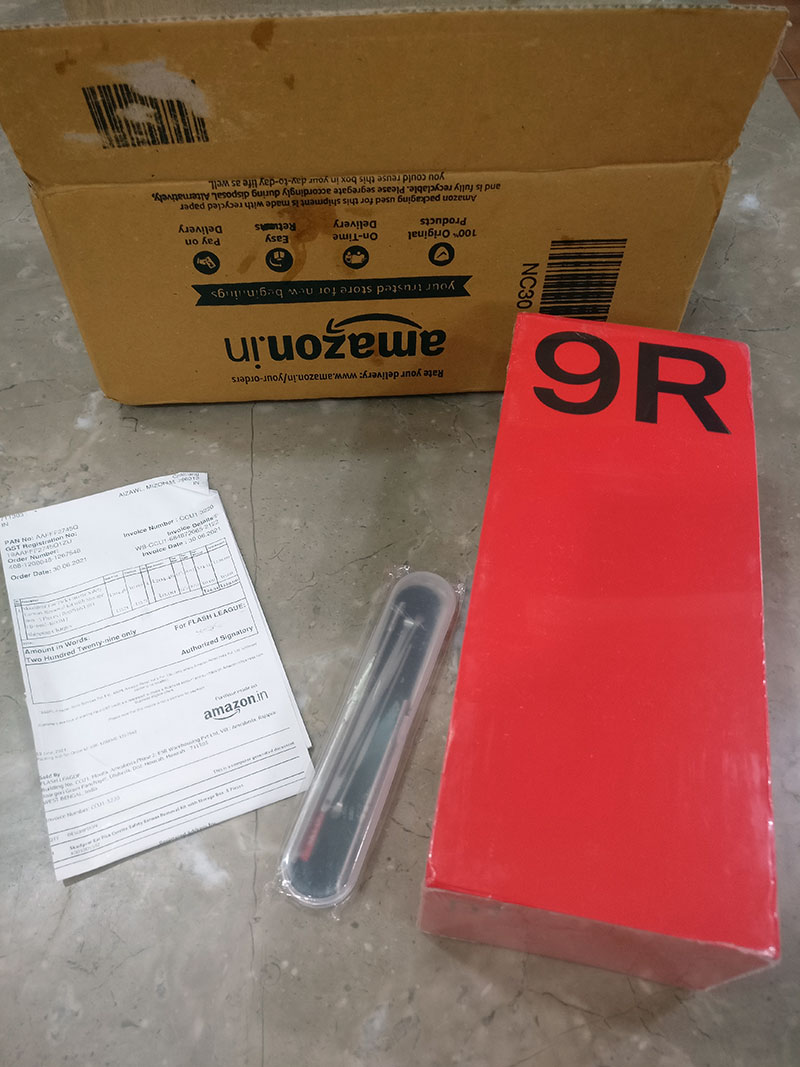 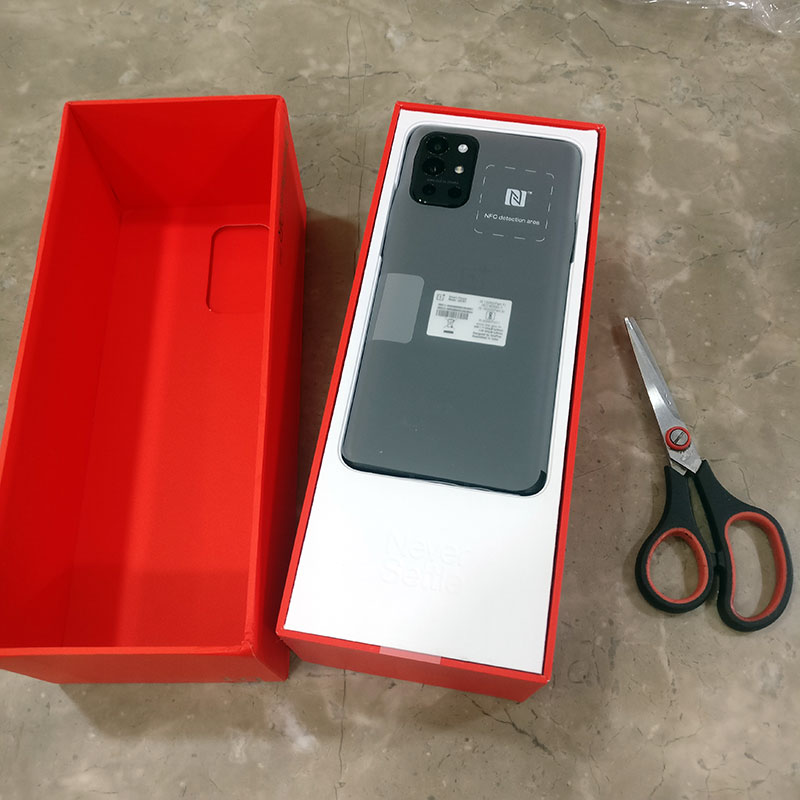 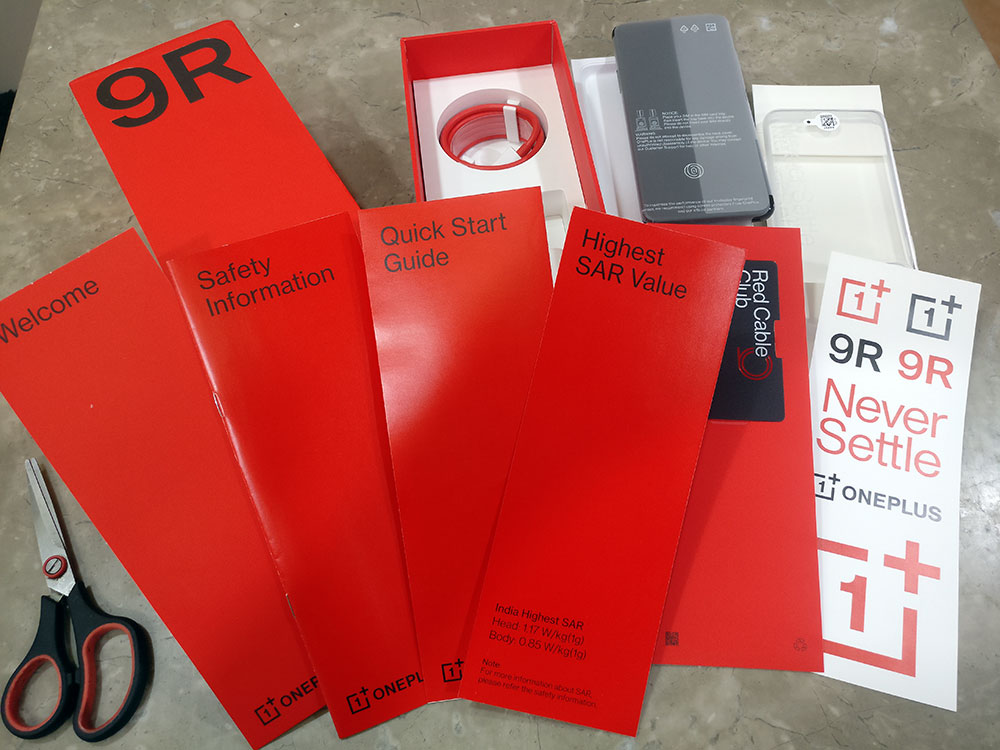 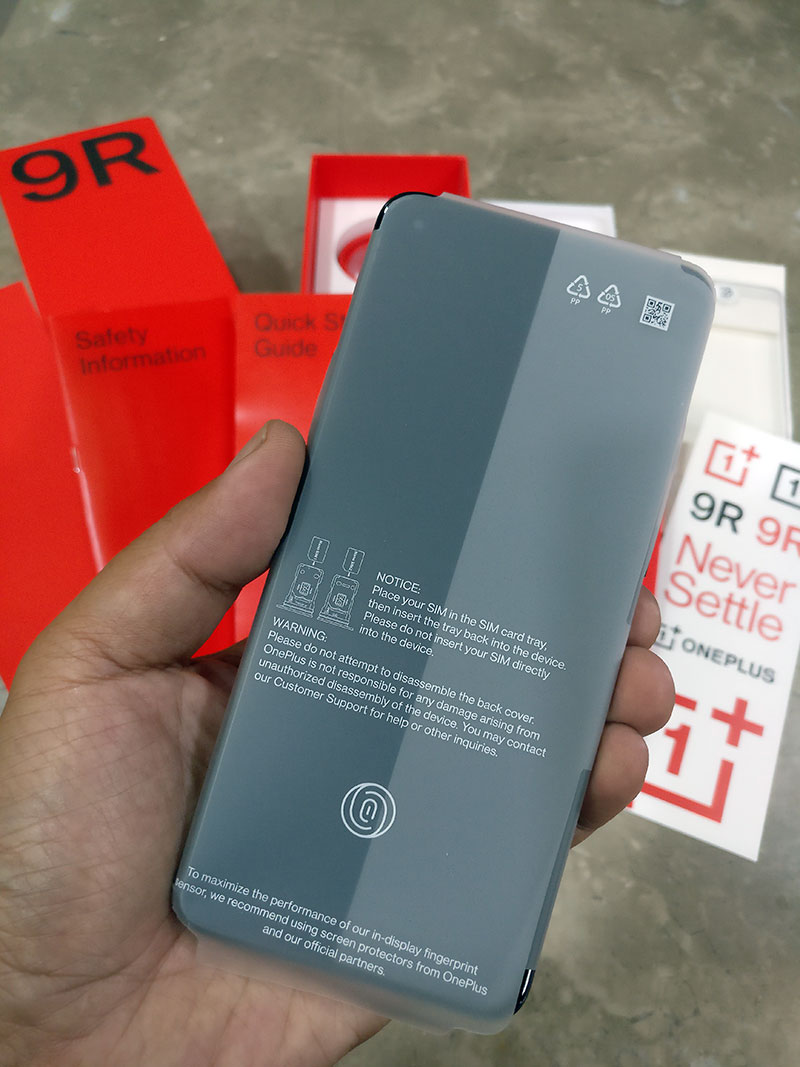 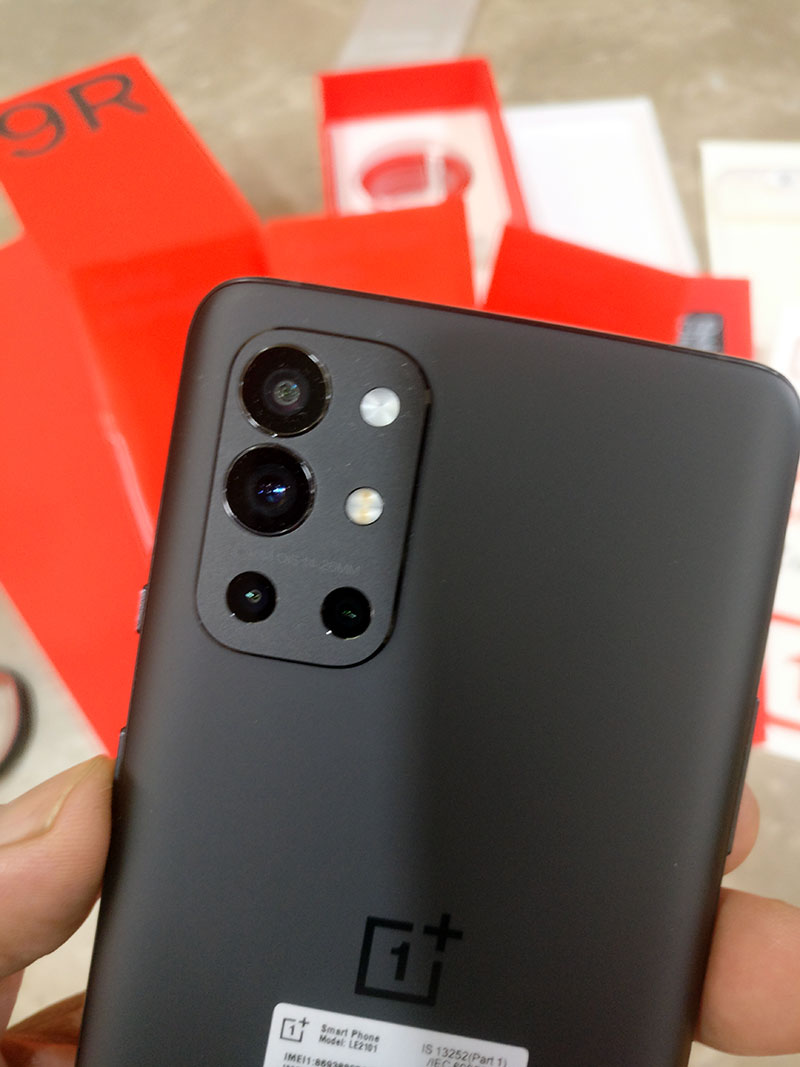 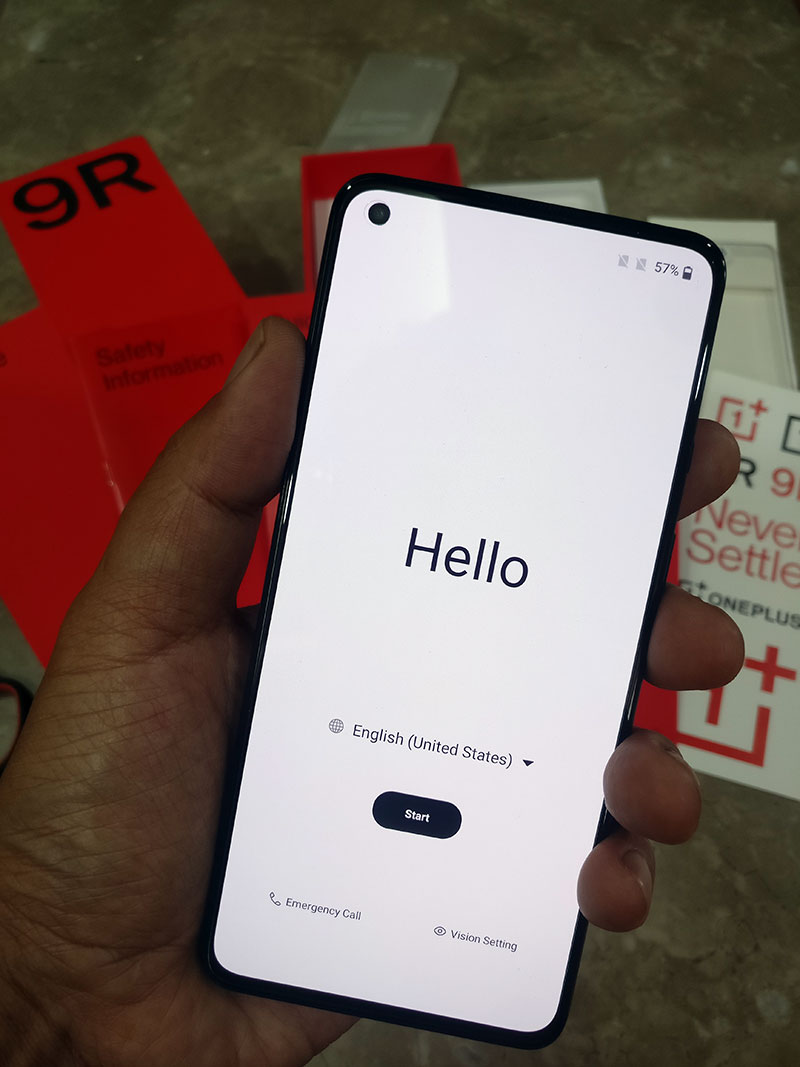 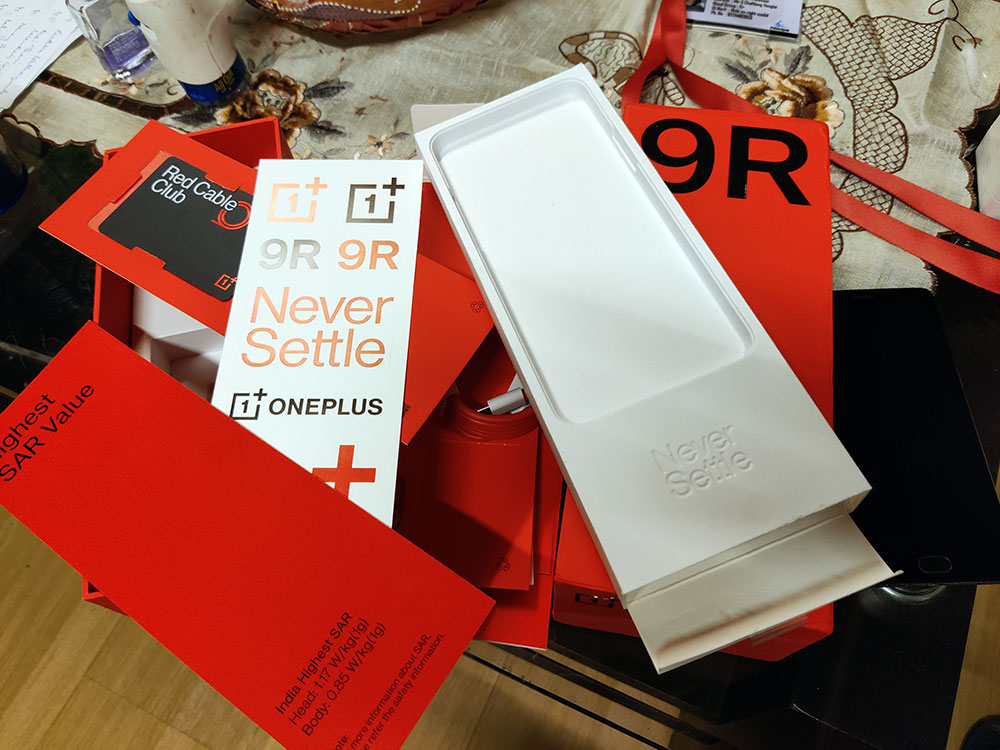