Vaccine Vaccine Vaccine! These days, everybody's talking about CoVid-19 vaccines.
From the demand of vaccines to the shortage of vaccines, from creating vaccine awareness to spreading anti-vax propaganda, from being simply vaccine hesitant to rigidly believing that Bill Gates had implanted a microchip in each vaccine to boost 5G cellular coverage for the arrival of the antichrist. The list is endless.
And on top of ALL those talks and debates on CoVid vaccines, I of course had to go one step further - I not only got my first dose of the vaccine but also got two other vaccines - Tetanus and Rabies. :D 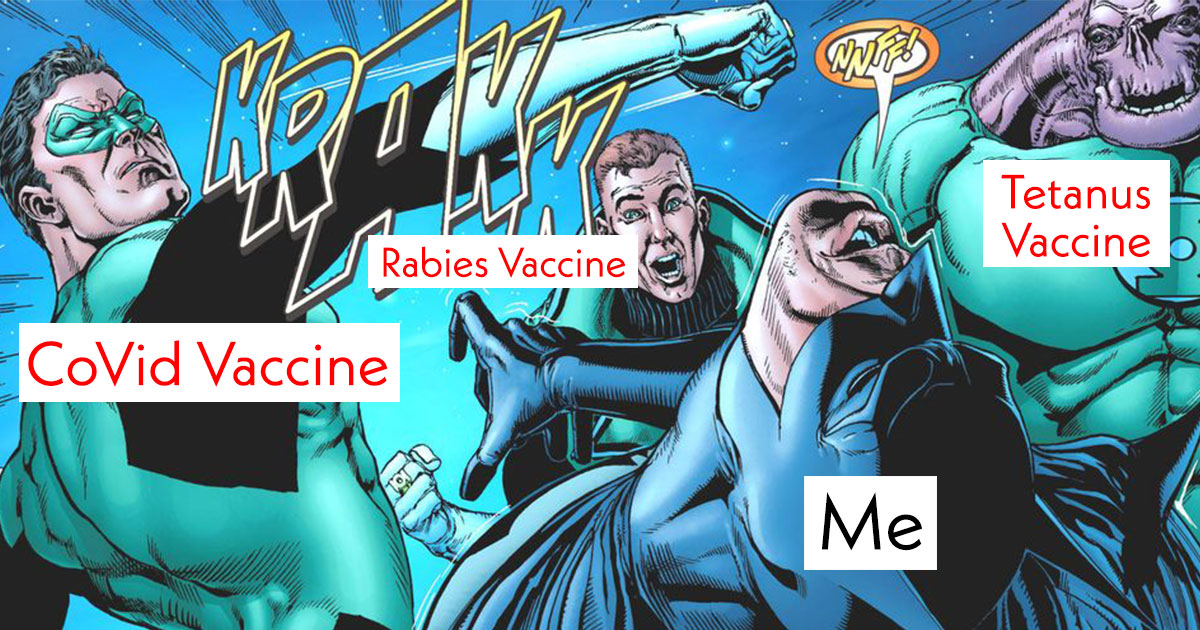 Ahhh what a life I live. I always have to do something different or unique. :D
So what happened was, I got bitten by a dog!
Yeah, my first dog-bite actually.
Three weeks ago, my dear aunt was admitted at Greenwood Hospital for a surgery. She's discharged and fine now, thanks to the doctors and God. My cousin and his wife stayed with my aunt in the hospital during that entire time, and since there was nobody at their house, I took up the responsibility of taking care of their dog, Toby.
Meet Toby. 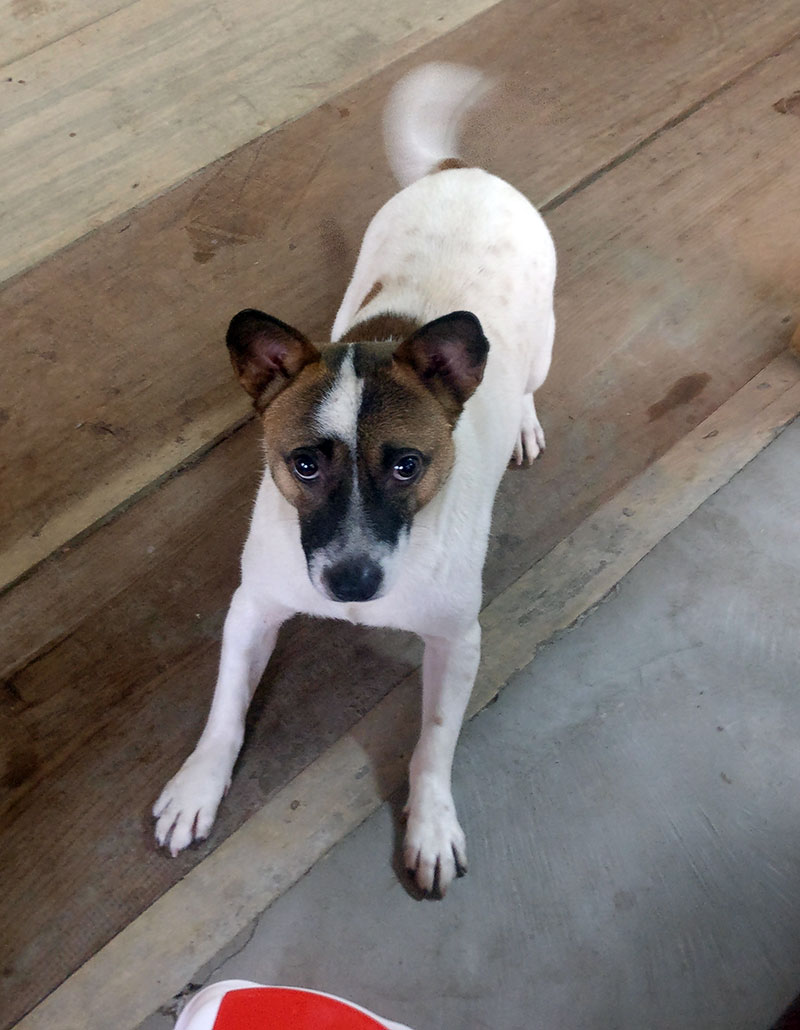 Yeah, don't let that cute smile and wagging tail fool you. Toby is one of the most timid and introvert dogs I've ever known, lolz. During the first 2 days I was taking care of him, he was hiding under the chair the entire time! 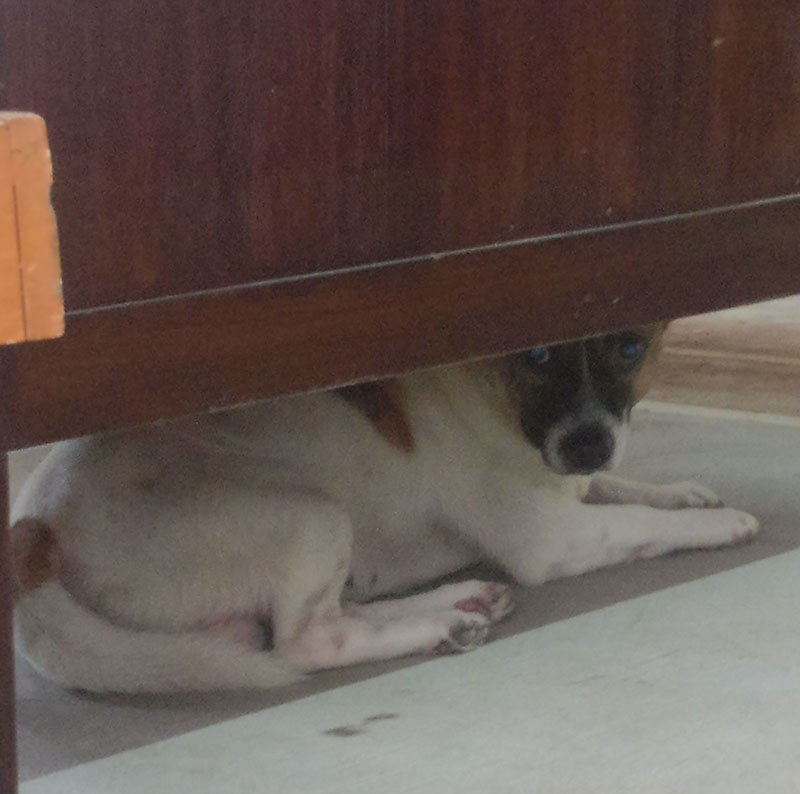 So my job was pretty simple. I would go down to their house at around 7 in the morning to switch off their balcony lights and unlock the door to let Toby out. 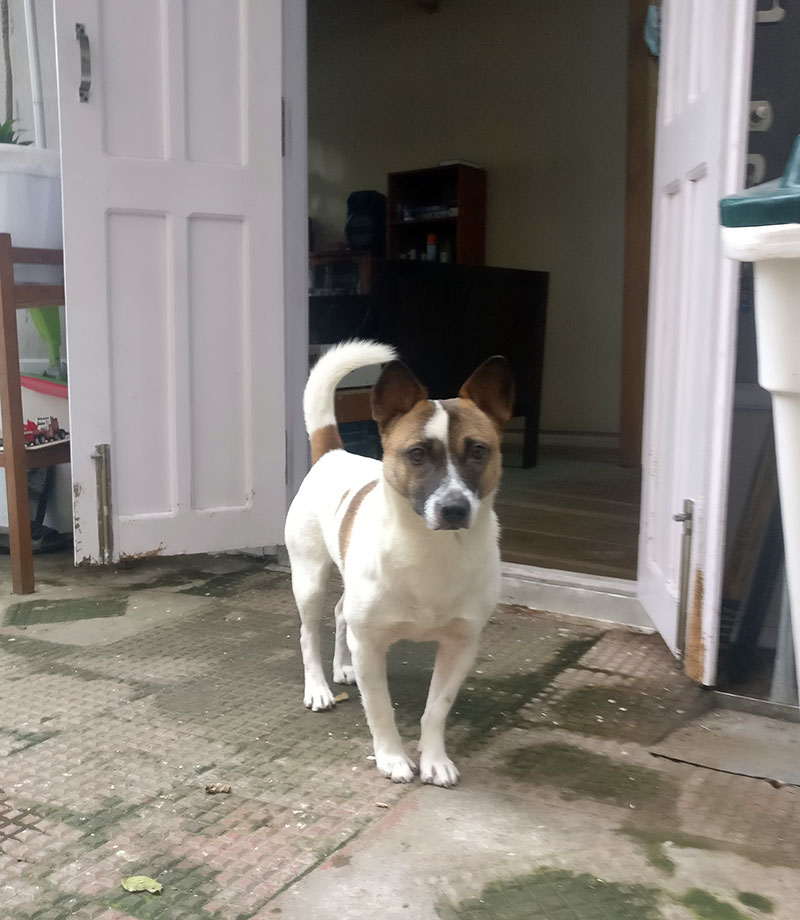 Toby would usually run around their yard, exercising his legs or sniffing the ground. 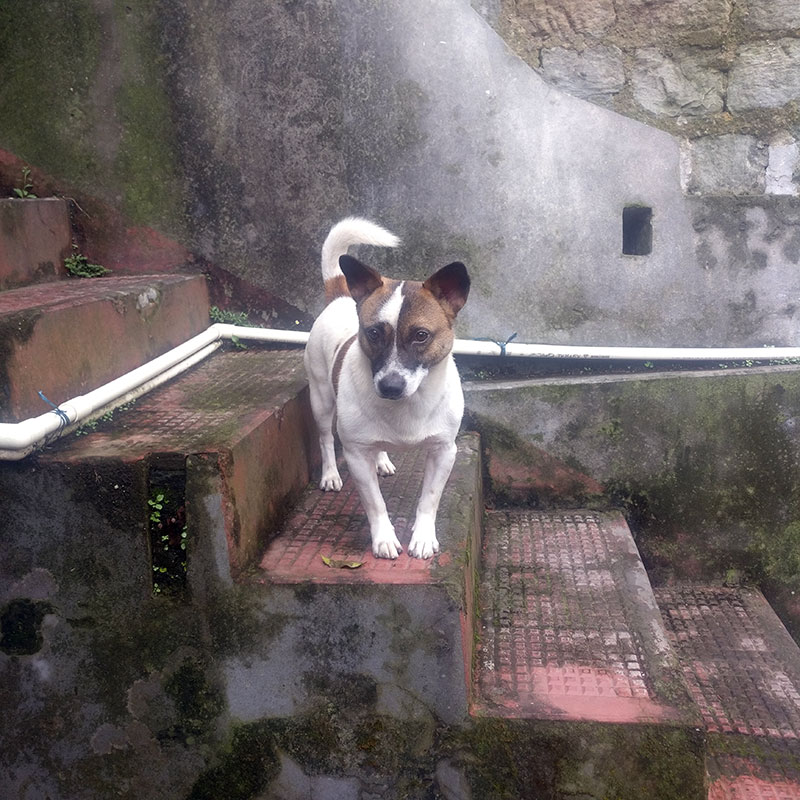 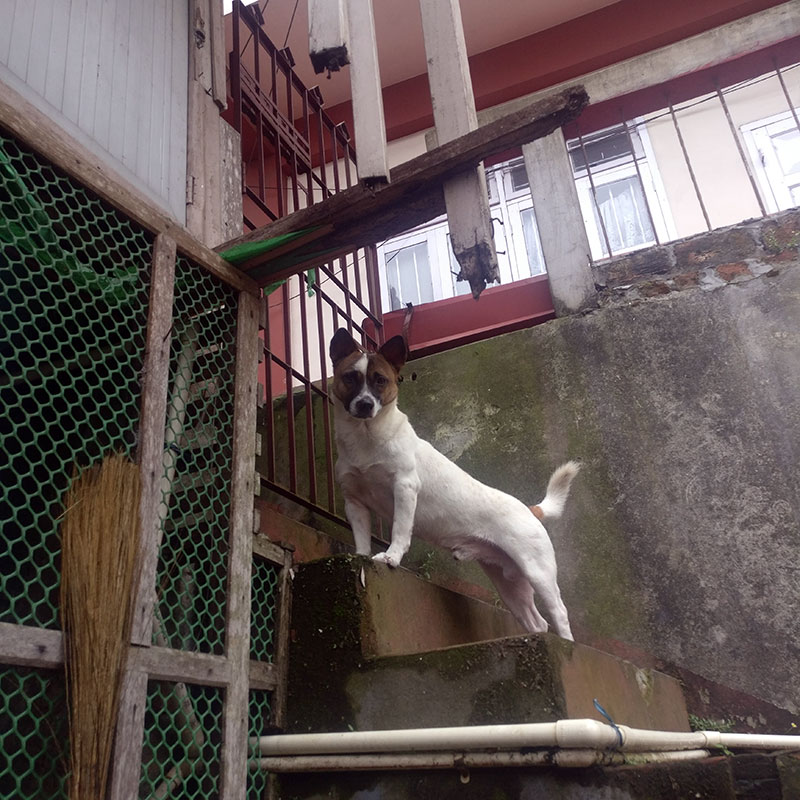 And sometimes he would poop too... 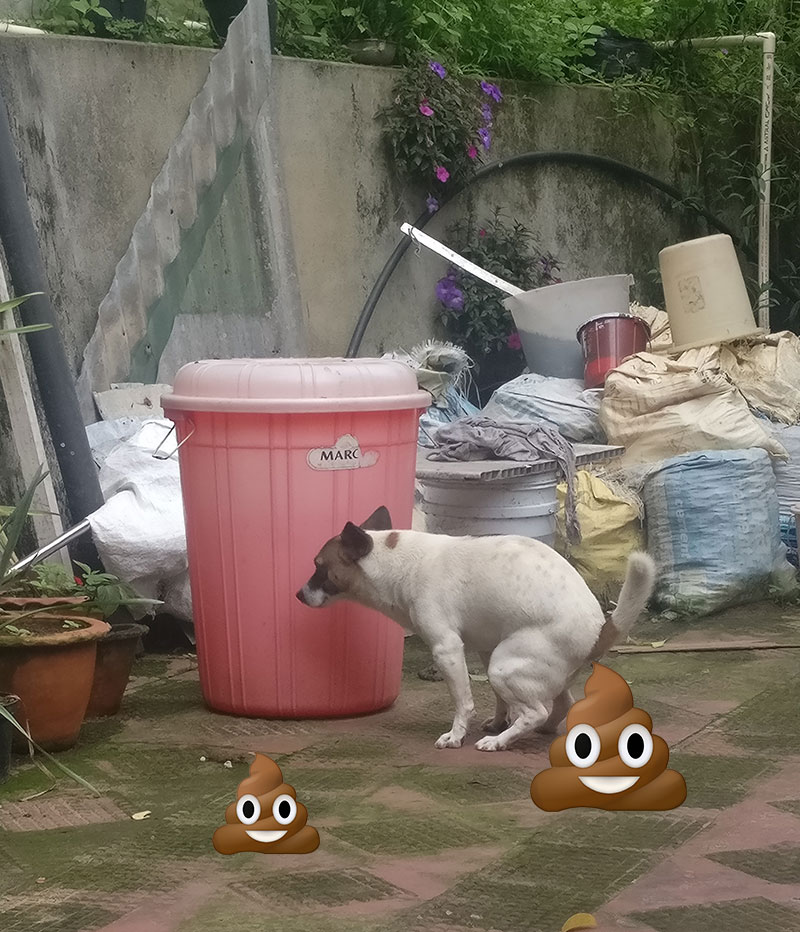 After that, I would lock him up inside the house again and then return around 10 AM to feed him his breakfast. 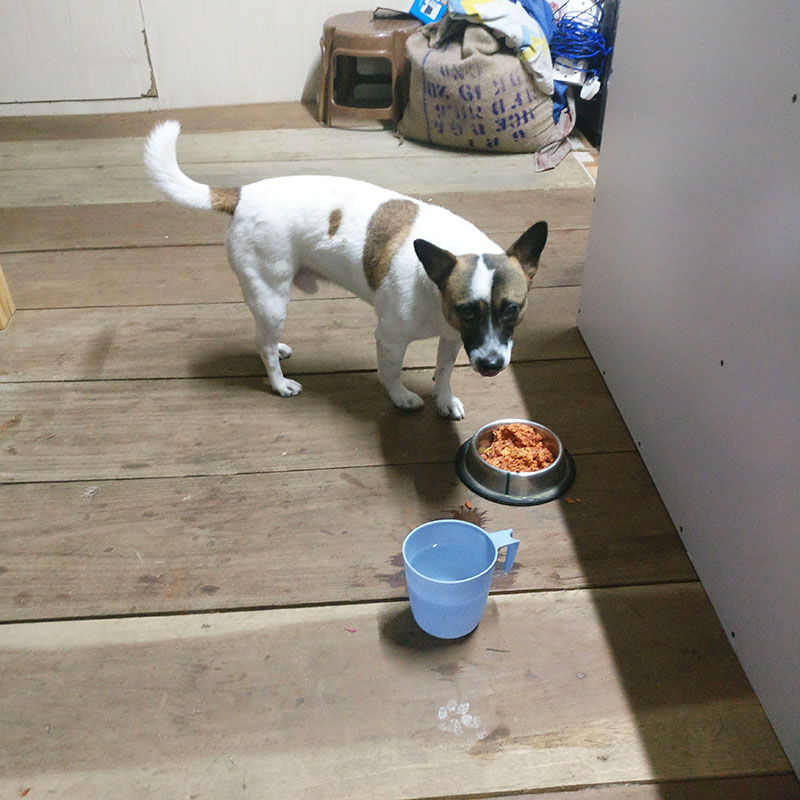 Around 6 PM when it's dark, I would go to their house again to switch on the balcony lights, unlock the door to let Toby out... 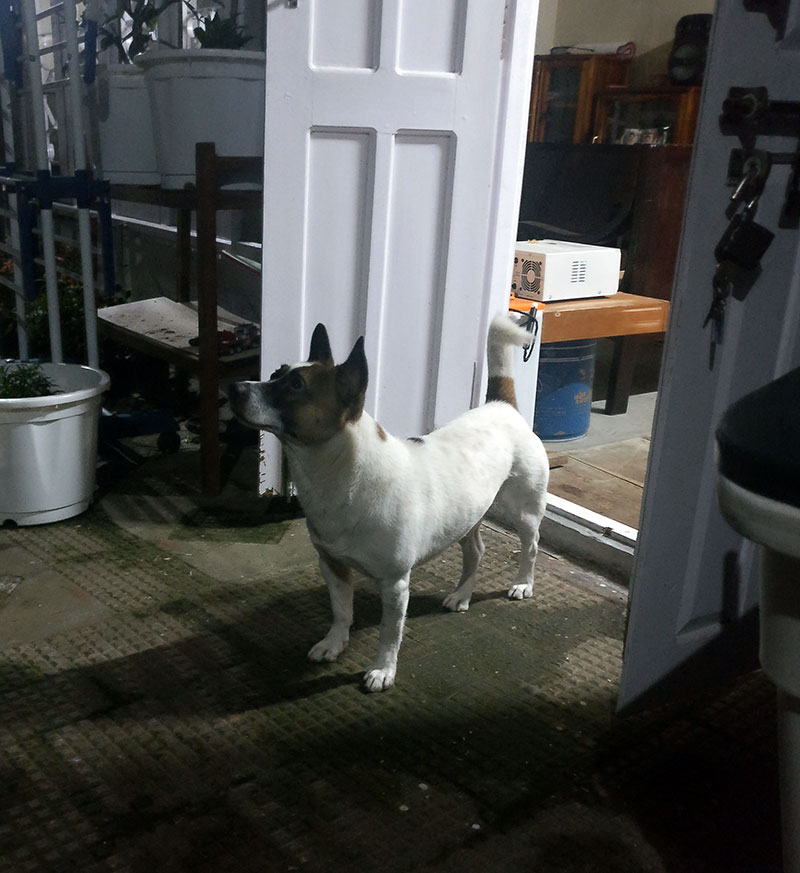 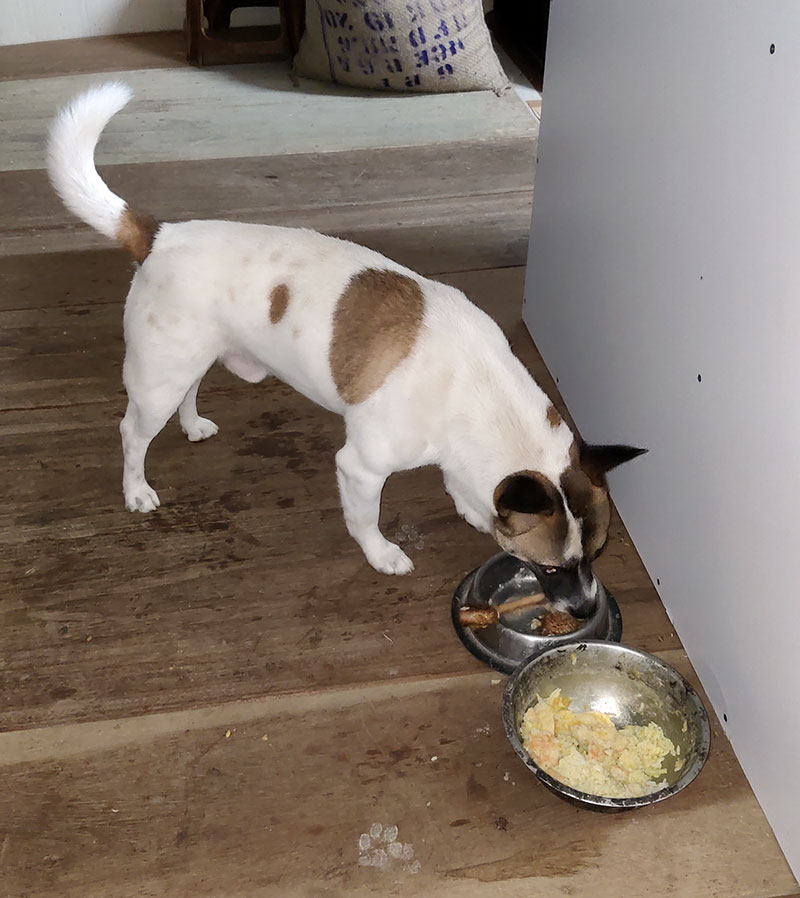 ...and then wait for him to pee and poo. 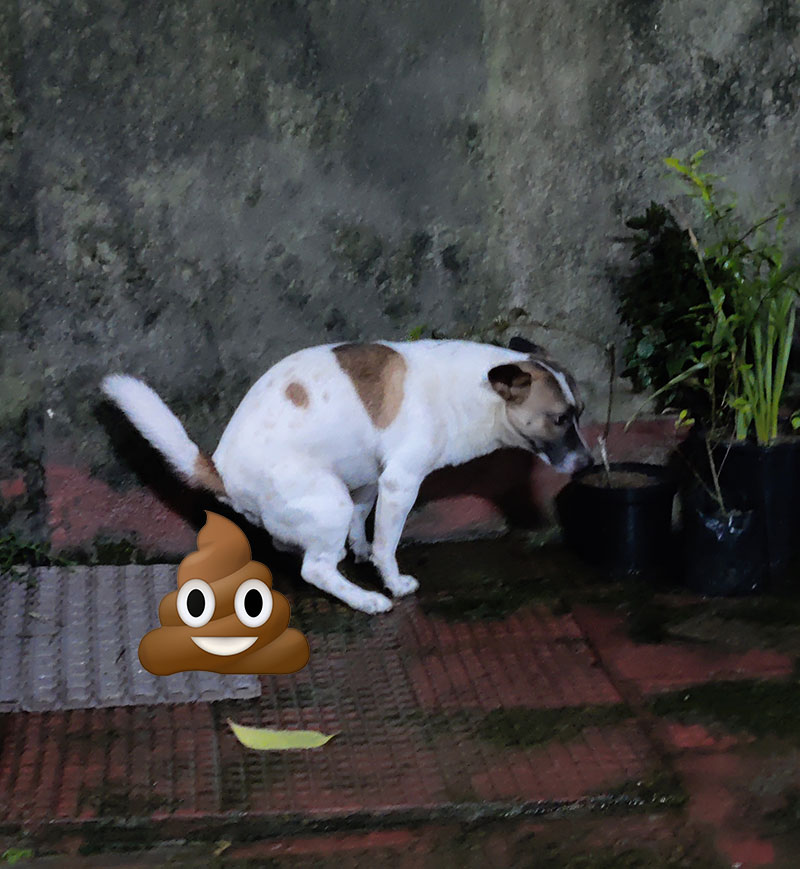 After that, I would wish him goodnight, lock up their house and head back home (we all live in the same colony). The next day, the same routine would repeat again.
Toby quickly recognized me and warmed up to me. He no longer barked at me when he heard me approaching their gate, and he would always greet me with his tails wagging from one end to the other the moment I unlocked the door.
On the 29th of last month, like every other day, I went and opened the door for him at around 7:45 AM. 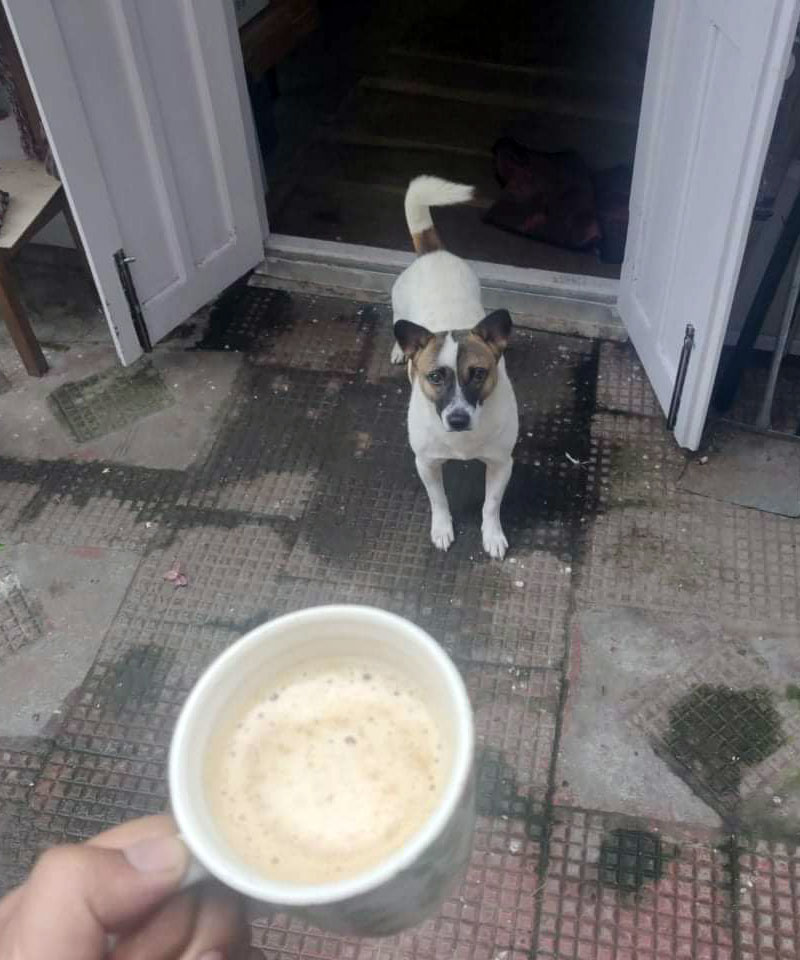 He was so cheerful and friendly that I took a picture and even sent the image to my girlfriend. 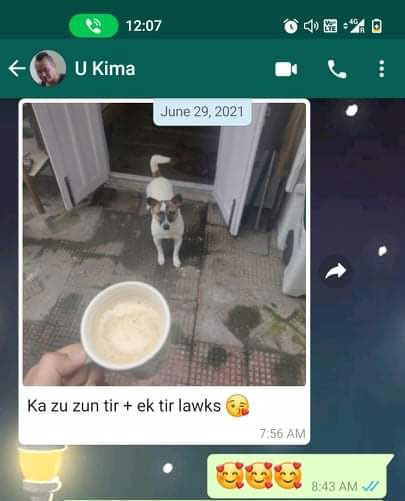 Since my old phone had died and I didn't back-up any images, I asked my girlfriend to send me a screenshot of my message that day (hence the reason why I'm on the other side).
At around 10:15 AM, I went to their house again to feed him breakfast. Toby was excited to see me as usual, especially because I brought him delicious food - a bowl of rice and chicken.
As he scrumptiously munched his food, I suddenly had this urge to pet him because he was looking sooo adorable. And so I reached out my hand towards his head, when suddenly he turned around and bit my hand, growling at me as if I was his sworn nemesis!
WTF!
I was so shocked to see the sudden change in his behaviour that I almost didn't notice my fingers which were bleeding profusely. I ran to the kitchen sink immediately and washed my wounds. 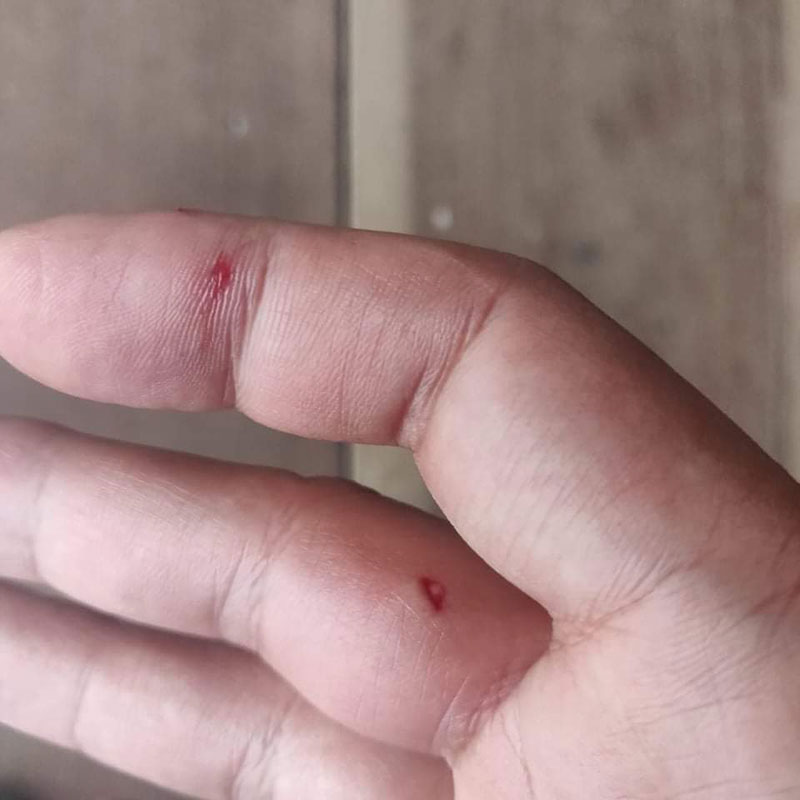 Yeah I know, the above wounds don't look very serious or painful now. That's because I had already washed away all the blood.
This was the message I immediately sent to my girlfriend too. Notice the sudden change in my affection towards Toby. :D 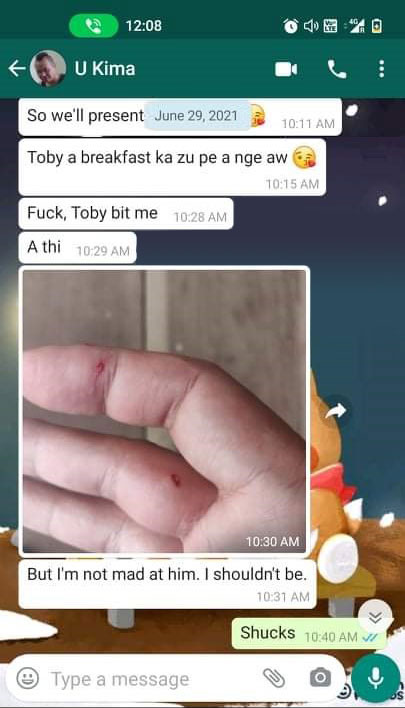 Lalani told me to put my hand under running tap water and wash with soap for at least 10 minutes, so as to reduce the chance of getting an infection. Perks of having a super awesome Vet girlfriend. :D
Once the bleeding stopped, I called up my cousin at the hospital and told him what his dog did to me, and he was like, "Ah yes, don't disturb him while he's eating, he even growls at me if I try to take away his bowl before he's done!"
Great! Now he tells me! :D
I asked him when was the last time he got Toby vaccinated, and he was like, probably 2-3 years ago. Aaarrgghhh.
I looked at Toby, who was all well fed by then and playfully wagging his tails at me, as if nothing had just happened. I gave him a stern look and asked, "Do you NOT know the proverb, "Do not bite the hand that feeds you"? Huh huh? Do you?" To which he replied with a quick nod.
I called up my friend Dr. Mahminga, owner of Waggin' Tails Pet Clinic, and asked him if he had any rabies and tetanus vaccines, but he told me that only human hospitals sold them.

Lalani too was adamant about me taking the two vaccines as soon as possible, partly because she loved me so much, but mostly because I had earlier sent her a photo of a rat that Toby had killed. :D 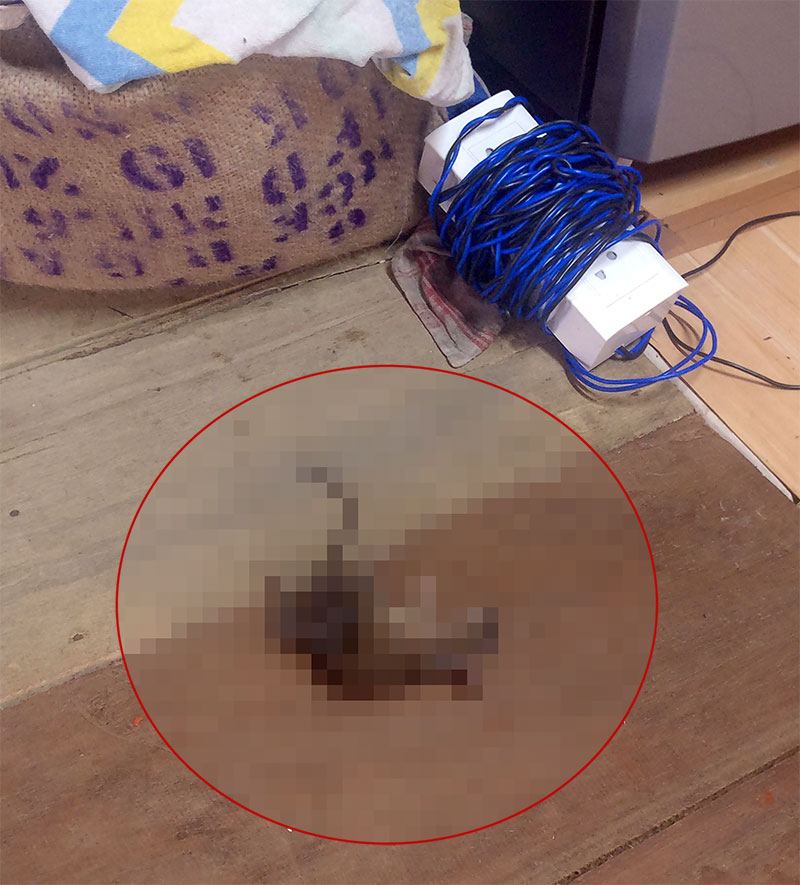 But because of the ongoing lockdown, I didn't want to take the trouble of going to the LC office to ask for a permit to go to the hospital. My aunt's surgery was going to take place a few days later anyway, so I decided to wait for that moment.
On the day of my aunt's surgery, we got a permit to go to Greenwood Hospital. Security was very tight at the hospital, and anybody who had to enter the hospital for an appointment or check-up was thoroughly tested for CoVid-19.
It was a tad funny watching the nurses sit at the hospital entrance shout into a loudspeaker, asking the patient who was 50 meters away inside a testing booth all sorts of personal questions, like did he or she had any positive contacts, were they vaccinated, and so on.
The people inside the testing booth didn't have any loudspeaker so they would shout back their replies, "NEI LOOO... NEI TAWHHH... ZARKAWTTT... KUM SAWMTHUMM... OPDDD...." Lolzz.
Thanks to my cousin Dr. Mahruaii (in picture below), I was able to get my rabies and tetanus vaccines from a doctor inside without entering the hospital or going through those publicised private questions. :D 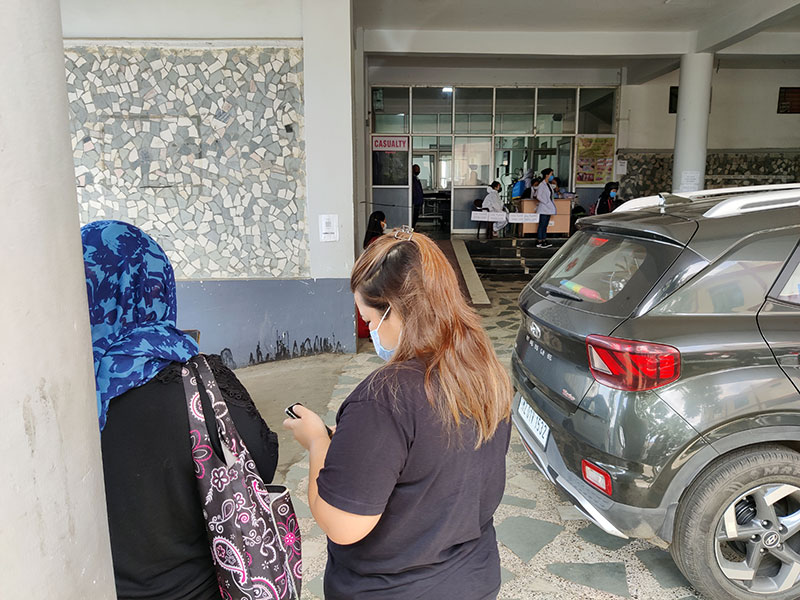 My aunt's surgery took place successfully and my cousin came outside to inform us about the news. There were around 10-15 of us cousins waiting at the parking lot. Once we heard the good news, we all went home relieved.
Back at home, I went to my neighbour U Lawmzuali's house and her daughter Tluangi, a nurse, injected me with the tetanus vaccine and first dose of rabies vaccine. 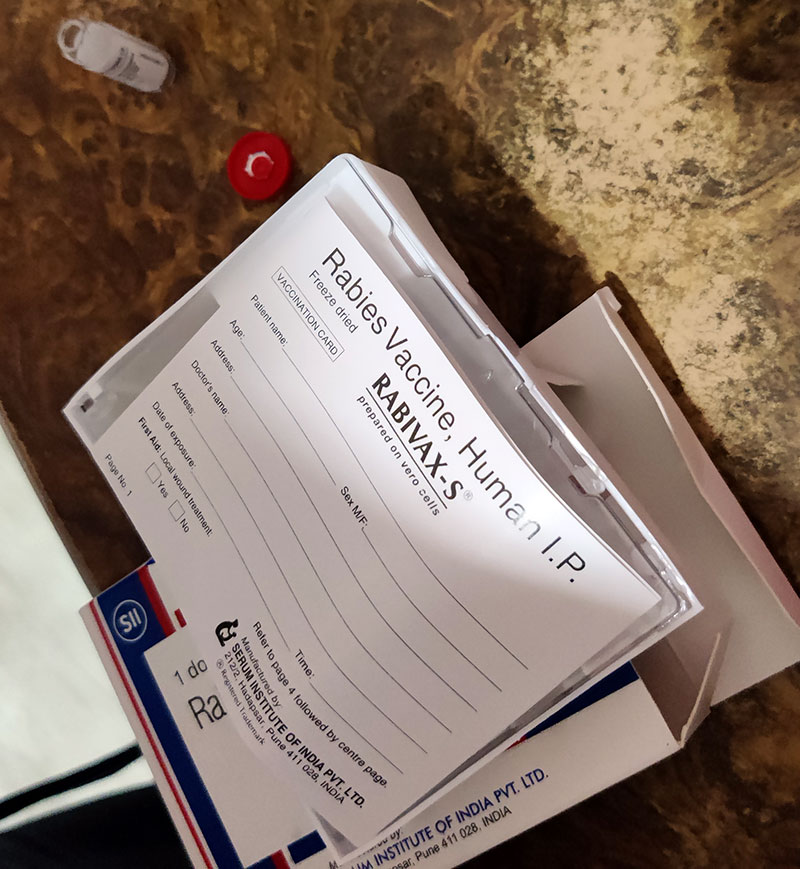 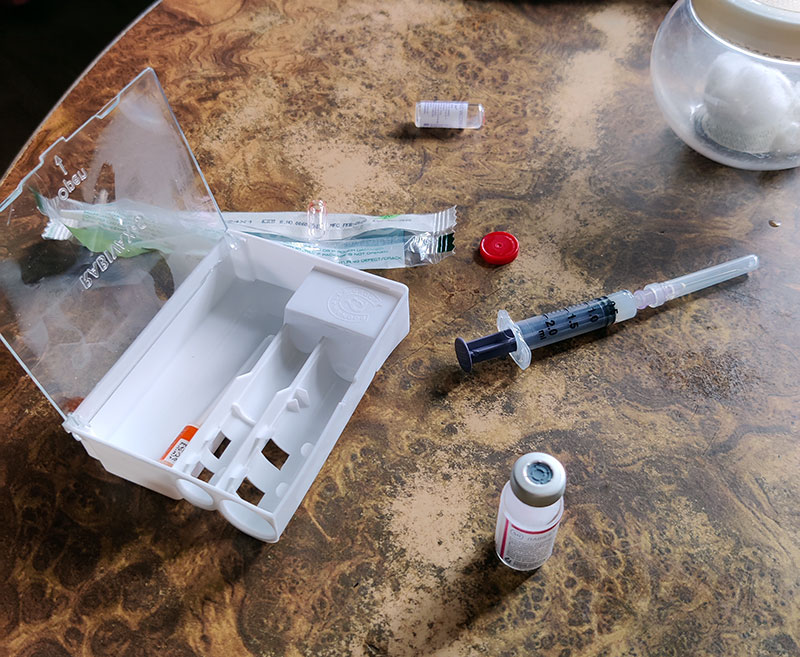 The three doses of rabies vaccine were to be injected on day 0, 3 and 7, and so Tluangi injected me on all three days. Thanks to her, I am now fully vaccinated against rabies and tetanus.
My right arm that took the tetanus shot was quite swollen for a few days, whereas my left arm that took all three rabies shots didn't even feel one tiny pinch.
Ever since I took those rabies shots, I no longer have the urge to bark at other dogs or howl at the moon, so I guess the vaccine was very effective. In fact, my face is now slowly returning to its human form too. Yayy. 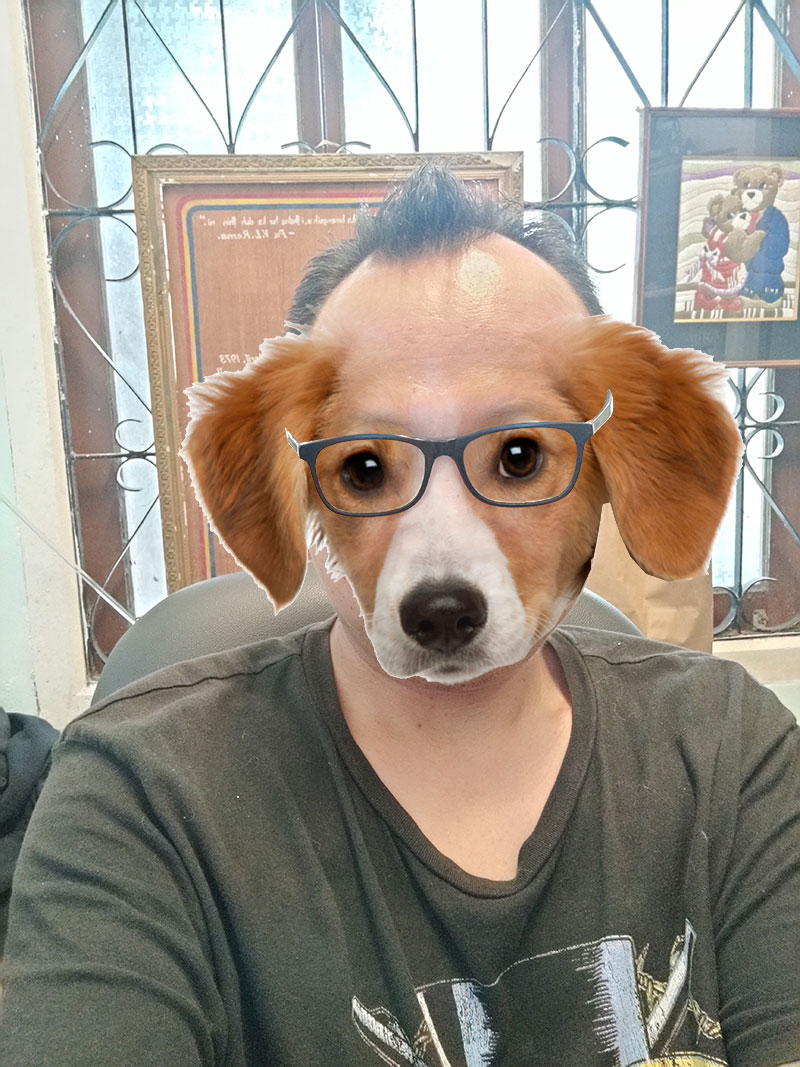 And so that was it, my tryst with triple vaccines. If you're still reading till here, please do get vaccinated against CoVid-19, and also don't forget to get your tetanus shot once every 10 years. You never know where those next bites can come from. Stay safe everyone. God bless.
Posted by Mizohican at Saturday, July 24, 2021